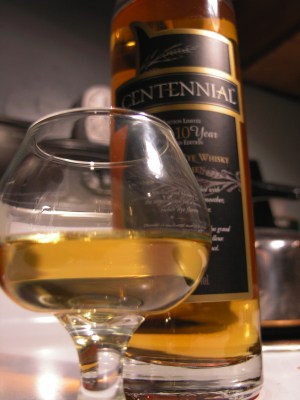 Highwood Distillers was founded in 1974 in High River, Alberta, and the distillery remains there to this day.  Having purchased Potters in 2005 (as we mentioned in our review of the Century Reserve Lot 1525) Highwood has become the largest (the only, actually) independently-owned distillery in Alberta.  Alongside a range of vodkas, rums, and other spirits, Highwood makes several whiskies under the Highwood and Potters names.  One of the whiskies produced is this Centennial canadian rye, aged a minimum 10 years.  Here are our thoughts:

Like the Century Reserve 15 Years Plus, this rye is beautifully bottled.  With honey and amber glowing from a tall, slender bottle, this whisky is a delight to the eye.  The nose is grainy and light, with a nice blend of fruit and spice balanced by a slight earthiness.  On the palate, honey and brown sugar sweetness is prominent, with dark fruits (plums, cherries) underneath.  Mouthfeel is very oily, having a viscous feel on the tongue.  A hint of vanilla and molasses appears on the finish, which is quick to fade.  All in all, this whisky is smooth and well-balanced, with no outstanding highs or lows.  For the same price or less than the more popular Canadian ryes (such as Crown Royal and Canadian Club), this is a very smooth and even-drinking whisky that is definitely worth a try.