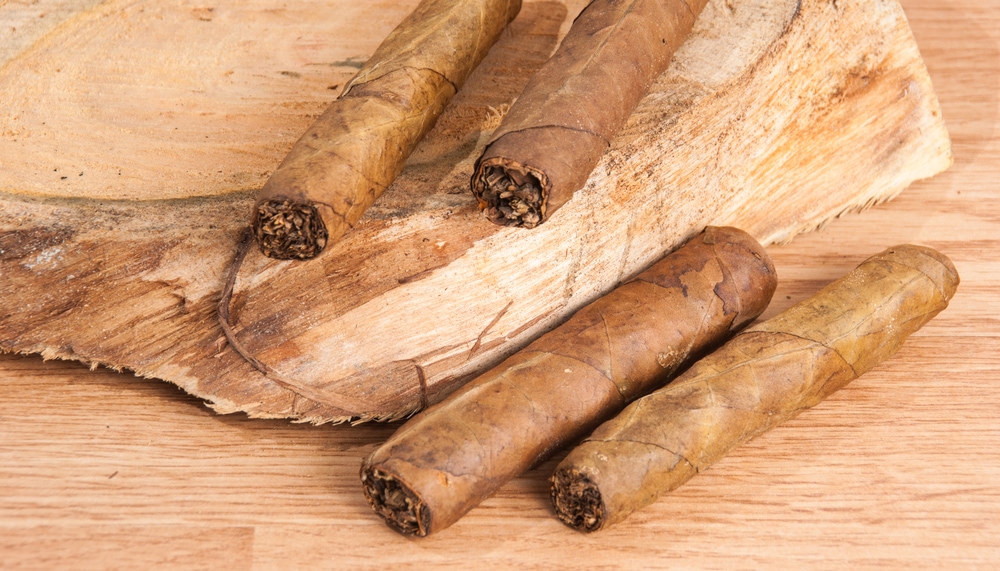 When I first began taking cigars a bit more seriously about 11 years ago, the first problem I ran into was how to store my cigars. I was happy to buy cigars as I needed them, but of course, that is rarely practical. After buying several cigars at a 7-11 I realized it was time to take a step and buy a humidor box/cigar humidor. I first went shopping at the local cigar store and found that for the storage I wanted of 25-50 cigars I would have to spend close to $100 retail.  $100 is what I spent on my box of Montecristo #4s. I would rather spend $100 to fill a humidor, so I decided I would try my hand at a DIY humidor. I had no idea where to start, in fact, at first, I didn’t even know what wood to use. 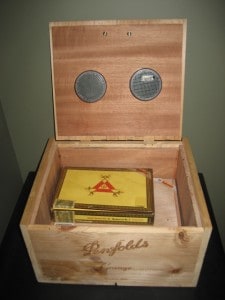 Humidors need to be lined with Spanish cedar because of the wood’s aromatic properties as well as its tendency to maintain an appropriate humidity for cigars. Securing a piece may require that you visit a specialty wood shop or you can take the shortcut and get a Spanish cedar plank online. I ordered a 4 foot by 2 foot for $25 and split that with my brother-in-law who was also making a humidor of his own.

How to Make a Humidor

I had the idea to build a humidor in a wooden wine box during my years working wine retail. It seemed so perfect to have a box that once held fine wine to be responsible to age fine cigars. Plus the box would look nice sitting on a desk or counter. I secured a Penfolds Grange box from a local wine shop. I chose this box not just because Grange is a great wine but because tasting notes of the wine often include cigar smoke and tobacco.  I also grabbed two hinges and a handle from a hardware store for about a dollar each. I had enough material to get started:

-Hinges to finish the box

-A hand saw and sandpaper

-Hammer and a few nails

-If you want to get fancy, you can add a hygrometer so you always know how much humidity there is in your DIY Humidor

I cut the cedar by hand which was fairly easy although a table saw or a miter saw with stand would have made it easier. I designed the pieces so that the largest piece was attached to the lid and would sink into the box resting on the four sides of the liner. I over cut all the pieces and sanded them down by hand to get a nice tight fit. Sanding by hand requires a bit of patience but the wine box was not a perfect cube. Eventually, each piece was the right size. I glued the bottom cedar piece to the bottom of the wine box first, then the four sides. I let the cedar that lined the lid rest openly on the four side pieces before I glued it. I applied the glue and put the lid right on top which allowed me to position the lid in the right place to apply the hinges. The hinges and handle hammered in with a few small nails. If I did this step again I might buy sturdier hinges since the small hinges I used barely hold up the lid if I keep it open.

After waiting for the glue to dry, I pulled up on the handle and the lid made a small sucking noise and pulled free! I could already smell the cedar very strongly inside the box. I probably should have allowed the box plenty of time to air out before I used it, but I wanted to test it as fast as possible so I purchased a humidor puck for about $8. My total cost now was just under $25. 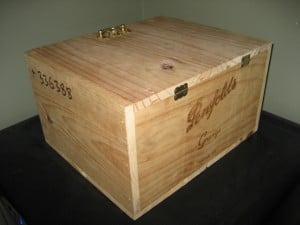 To test a hygrometer, take a small neutral container like a bottle cap, sprinkle some table salt in the cap, and wet the salt so that it is partly dissolved. Put the cap and your hygrometer in a zip-lock bag for 24 hours. The hygrometer should now read 75%. Thanks to Stogie Guys for the salt tip. After a few days left alone, I opened the wine box and discovered a hygrometer that displayed 70% humidity. The thermostat on the wall also read 70 degrees Fahrenheit. 70/70, the perfect conditions for storing cigars. Two weeks later, my Montecristos arrived from Cuba and I had my first Humidor to age cigars in.

This was two years ago, and my DIY humidor is still going strong. I purchased a second humidor puck in case the first one fails in its old age. I keep them topped up with distilled water and my humidity stays steady around 70%. As I’m sure all humidor owners know, the Humidor filled up quicker than I thought, and now I’m thinking about starting another.

Unless you are keeping this thing in your fancy personal library for all of your high-class pals to see when they are over for cheese and wine, go ahead and learn how to build a humidor for yourself and save the money for the great cigars you are going to store inside of it.