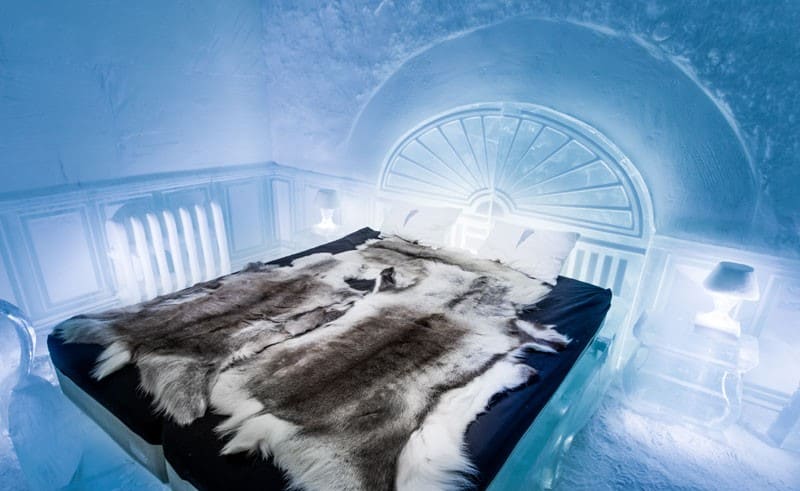 The most prominent hotel of ice and snow in the world, the Ice hotel, is well-known to be an excellent and pleasant hotel to stay in for the holidays. It has a formidable and attractive appearance (depicting an art exhibition significantly made out of ice and snow), and it undergoes renovation annually. The Ice hotel gives an environment of a classic hotel experience. One can consider it a way to welcome the holiday period to visitors at the end of each year. Every visitor gets furnished with an exquisite, polar-tested sleeping bag. A Finnish steam bath produced by pouring water over heated rocks is present as there is no heating in the bedrooms. The water goes back to its source where it initially flows from antediluvian mountains positioned in the western region. Guests can snuggle up as they watch the magnificent and mesmerizing Northern lights at night. There are multiple places in the relatively large hotel to observe this ethereal occurrence easily. A survey shows many areas to relax and enjoy the experience to the fullest. The guests involved can, therefore, choose an area of preference that invokes respite from the cold winter nights.

The ice hotel in the Northern part of Sweden is a tourist attraction in itself as people from around the world visit it every year near the New Year’s to see and experience a one of a kind hotel in the world. It is located in a small village of Jukkasjärvi, Kiruna Municipality, Norrbotten County, Sweden. Only 548 people reside in this small village according to 2010 statistics.

It is situated at the height of approximately 1000 feet above the sea level which provides it with an outstanding view of the surroundings. This village is very near to the northern border of Sweden which touches both Norway and Finland. The northernmost part of Sweden and Finland is also known as Lapland which is known for its beauty and picturesque landscape.

The village boasts of a wooden made church that was built at the starting of the seventeenth century along with the more famous ice hotel. These are the two main attractions of that area which make tourist bonkers around the world. Also, it is the perfect location to view the uncanny natural phenomenon known as the Northern Lights.

A contrast of colors dancing in the sky is Northern Lights. It can be observed only in the winter season when the sky is clear. The science behind it is that some radiations or part of the sun divulges and reaches the poles of the earth (the North Pole and the South Pole) giving birth to this striking marvel.

Let’s talk about some facts now!

There are many activities one can enjoy and cherish for their whole life in the Ice hotel as listed below:

The Arctic Summer in Ice Hotel

Summer is also a celebrated season in this part of the Arctic as it has its own supernatural wonders in its pockets. As the sun starts to embrace the dark winters, the Ice hotel melts away to its own source which is the Torne River. Also, the other natural phenomenon, i.e., the midnight sun kicks in from mid of May to mid of July. The sun doesn’t set and shines bright twenty-four hours a day for two months. The farewell of harsh winters welcomes the lush green trees and wildflowers along with the flowing water in the Torne River. It is like waking up from hibernation. All the living and non-living things get their energy back from the sun. Light winds with birds chirping give back the life to this place.

This is a time to enjoy white water rafting, canoeing, and stand up paddle, kayaking, and many other water activities in the Torne River. One can also enjoy the famous Kokkaffe which is a coffee boiled in a kettle on an open fire by the side of the river. It is served in a finely made wooden cup. One can also soak in enough Vitamin D from the sun in these two months. So, no more need to consume those Vitamin D pills!

One can also indulge in hiking in the slightly steeped mountains covered in forest with the breathtaking view of the whole village. The fresh air revitalizes the soul of hikers and gives them the required energy to complete their challenging hike successfully.

Couples from around the world come to this hotel to get tied together in the bond of marriage. It is one of the unsurpassed places in the world to get married. The guests can stay in the Ice hotel along with the wedding ceremony in the ice chapel. The wedded couple can throw a one of its kind reception at the most serene place. It will be a wedding to remember. 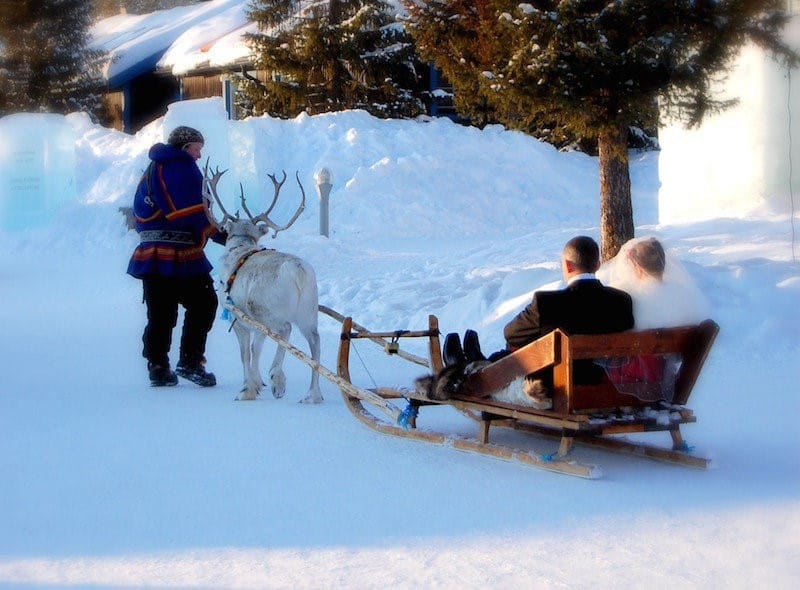 The summer wedding is also as tranquil as the winter one. Getting in the ties of marriage under the midnight sun in the wooden church can be a day to remember for the couple, family and friends.

Spring in the Arctic Ice Hotel

This is the season when the six hundred locals of the village rise to the welcoming of the spring. This is also the last time to catch the northern lights as the sun starts to shine. Local’s favorite sport has to be ice fishing which makes for a great past time activity and their food as well. Remember to put a generous amount of sunscreen on the exposed area as the sun is awfully bright post winters. The weight of clothes also reduces during this time of the year as the temperatures start to rise.

The harvest of ice blocks begins in April from the Torne River and is stored in the ice storage to make it useful the next winter.

It is safe to say that this is one of those experiences which can’t be missed and should be felt at least once in a lifetime. The price to stay for a night at the Ice hotel is quite high for budget travelers. However, we can’t put a price on an experience of a lifetime, now can we? One should book the hotel in advance as it is very popular and rooms get booked in the blink of an eye. There are many websites from which you can book the hotel, or you can also directly contact the reception.

Best of luck for your next holiday! Happy winters!

Yogi and Suchna believe in taking the road less travelled and stumbling upon some hidden gems along the way! For over a decade, they’ve mapped their way across various continents, sniffed out unusual routes, discovered new flavours and stayed at quirky hostels. TheVillaEscape is their expression of soul travel. To see Northern Lights In Finland you can catch up with them at TheVillaEscape.

How To Prepare for Your First Yacht Charter in Croatia