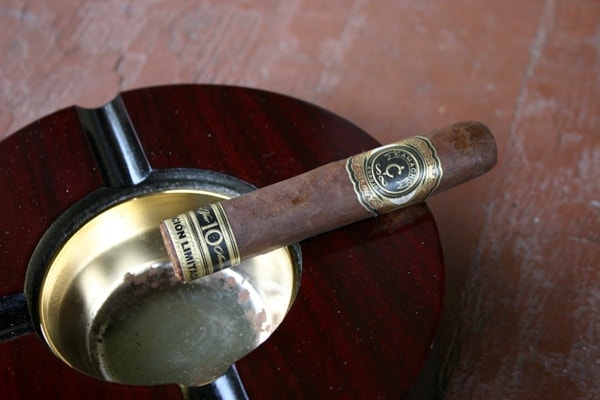 Comacho cigars are well known for providing excellent quality, flavors, and affordability.  They offer a wide variety of lines, over a dozen, which range from mild and mellow to bold and robust.  The company was founded in Miami after leaving Cuba to flee from Castro in 1961.  From there they would settle with production in Honduras and create cigars using Cuban seed tobacco in classic Cuban style and taste.  This particular vitola is the 10th Anniversary line, and is made entirely with Honduran grown Cuban seed Corojo tobacco and blended by Christian Eiroa.  It was created to commemorate the family’s 10th year of producing the world’s “only authentic Corojo tobacco.”  That’s quite a claim, but it’s also quite a cigar.

This vitola is a robusto size, measuring in at 50×4.5.  It’s wrapped in a dark brown Corojo wrapper, with the color of bittersweet chocolate.  It has medium veining that shows through, even with the dark tone of the leaf.  To add to its slightly rugged appearance is a slightly rough texture, a little like brown paper would feel, though it isn’t off-putting.  Despite the rougher texture, it appears to be smoother than it feels with the oily sheen that’s visible in the sunlight as I look at it.  The cigar isn’t as densely packed as some others I’ve felt.  It has a slightly spongy feel, some give as I squeeze it gently between my fingers as I turn it to look it over.  However, that doesn’t mean it’s lacking in tobacco, just that there’s more give to it.  Bringing it up to my nose produces a sharp and spicy scent with cedar mixed in.

Toasting the foot is simple with a single torch lighter, and cutting the cap is smooth and produces no tearing.  I make sure it’s lit evenly and take a puff to be greeted with medium bodied and sharp flavors.  I taste nuts, coffee, black and red peppers, and hints of leather.  After an inch the flavors settle out with the nuts and coffee forming the core and the leather noticed in the background.  The pepper comes briefly in the beginning of the flavors and again at the finish.  All the flavors are bold and sharp, easily picked out from one another, and yet not one of them clashing with the other.

As the cigar progresses the nutty flavor tones down a little, but never fades away.  It complements the coffee very nicely as the core flavors.  The pepper becomes sharper, especially upon retrohaling, but doesn’t become overpowering; it’s bold and grabs your attention.  Towards the last couple inches I pick up some woody flavors, like oak and a little cedar.  More interesting I notice something like dried fruit, perhaps cherries.  It’s very subtle and fleeting, but noticeable for me.  I rather like it, and it makes for a nice finish to the flavors.

I’m very satisfied with this cigar.  The flavors are bold and sharp, and though they don’t blend into one another they still manage to complement each other well.  The construction is quite good with a superb burn, slow burn, and excellent draw.  It never grew harsh on the palate, and the flavors never turned sour or chemical, which shows the tobacco was cured well.  The only thing that puts me off is the price, running at $11.30 online.  That’s a fair penny for a cigar, and usually I reserve that much for a Padron Anniversary series.  However, I will concede that the cigar is worth it for those that enjoy that flavor profile.  I wouldn’t have an issue buying another sometime for myself, and would recommend others try it for themselves if they can.