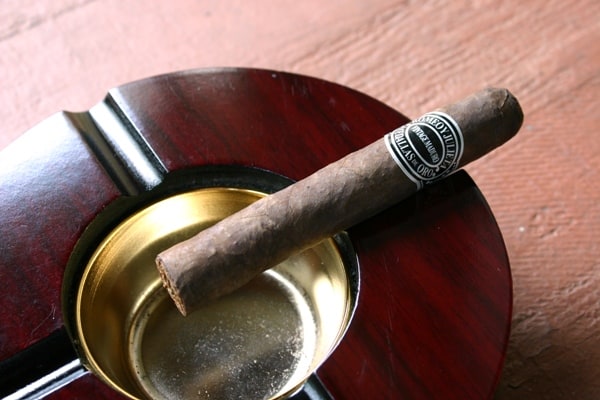 Romeo y Julieta is one of the oldest cigar makers, dating back to 1875 by Inocencio Alvarez and Mannin Garcia.  The brand is named after Shakespear’s famous play, though the brand itself and its cigars are most definitely not a tragedy.  The brand took off in the early 1900s when Jose “Pepin” Rodriguez Fernandez took over the brand and started promoting it worldwide.  Interestingly, he used his racehorse, Julieta, to help garner name recognition and fame for the name, and strangely enough it worked well.  The brand became very popular with many people, and is one of the best known names in the business.  After the Cuban Revolution took place, tobacco became a nationalized industry.  The brand moved to the Dominican Republic where it currently makes cigars while the name is also used by the Cuban government for their own line of Romeo y Julieta cigars.

Today I’ll be reviewing the Dominican brand in a robusto vitola, measuring in at 6×46. It uses a dark Connecticut broadleaf maduro wrapper, Ecuadorian Sumatra binder, and a blend of Dominican, Nicaraguan, and Peruvian leaves for the filler.  The wrapper has a rough texture to it, like brown paper.  It’s a darker brown, bordering on black sometimes, with some mild veins and a mottled appearance with a few of the cigars I have.  To be fair, though, these cigars are well over four years old at this point, so their appearance has changed a little from the pure ebony blackness they used to have.  One thing that hasn’t changed, however, is the rough and tumble look.  It is an ugly cigar.  However, as proven with the Padron Delicias, ugly cigars can still taste delicious.

Cutting the cap draws a little resistance from the densely rolled leaves.  Lighting is easy with a single flame torch, smoldering evenly without any difficulty.  The first puff brings in a copious amount of smoke and shows an easy draw, with only a small bit of resistance behind it, enough so that you don’t feel like you’re just taking a breath in.    The initial flavors I get are mild spices, leather, cedar and oak with smokey and toasty overtones, bittersweet cocoa, and coffee.  That’s quite a few flavors in that first puff, and it takes a little time to sort through them all.  The flavors didn’t really even out and come into their own until half an inch into the cigar.

The flavors are finally settled down and I can taste them each more clearly.  It’s a nice transition from one to the next, flowing smoothly like water.  Initially I get a mix of a mellow cedary, a sweet charred flavor that reminds me of the caramelized sugar glaze over some of my grandmother’s desserts, and a bittersweet chocolate.  Those core flavors fade into a sweet finish of spices, earth, and a hint of leather while the cocoa flavor from the core holds strong to the very end.  The aftertaste is interesting, and has a mix of sweet earth and a little saltiness.  As the cigar progresses there’s some minor changes to the flavor.  The core stays mostly the same, with the cedar note growing stronger without overshadowing the caramel and cocoa flavors.  The spices grow more intense while the leather mellows, and almost disappears towards the end.  The cocoa note stays consistent the entire cigar, and is one of the stronger and more lasting flavors up until the sweet and salty aftertaste.

Overall the cigar smoked wonderfully.  The only time that I had any issues were when I let the cigar rest for too long while I watched my German Shepherds play tug over one of their toys.  It showed solid construction with its slow and even burn and resistance to the humidity that’s been plaguing my area.  The flavors were all enjoyable and flowed smoothly from one to the other.  They came together and presented a nice harmony of flavors and scents that easily makes this a cigar that I would get another box of.  Now prices vary depending on your source, but I’ve found these online for approximately $120 for a box of 25 cigars.  That comes down to less than $5 per cigar, an easy value and something I’d call a steal.  These are definitely a cigar I would stock up on, given the chance, and would recommend you trying one and seeing what your thoughts are.