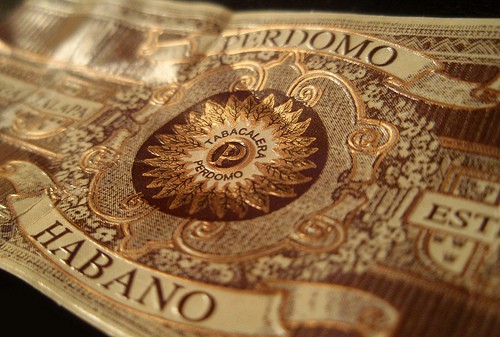 Started by Nick Perdomo Jr. in the early 1990’s, Perdomo Cigars has an interesting history leading back to early 20th century Cuba.  Nick Jr’s father and grandfather were both rollers for Partagas, amongst other Cuban brands, until the communist revolution in 1959.  Nick Sr ended up with two bullets stuck in his body before fleeing to America, where Nick Jr. later worked as an air traffic controller before starting Nick’s Cigar Co. in 1990.  The company has since grown to be one of the larger cigar manufacturers.

Produced starting in 2007 in Esteli, Nicaragua, the Habano Corojo features tobaccos from the Esteli, Condega, and Jalapa regions of Nicaragua.  The Corojo wrapper on the robusto (5″ x 52) we tried had a beautiful sheen to it, and our sticks were all flawlessly rolled.  Combine that with a beautiful double band (one on the foot), and this cigar will instantly beauty your humidor.  The cigar has a very tight/stiff feel to it, yet the draw was steady.  Pre-light aromas are citrus and straw.  On first light, the cigar has mild spice, with a bit of sweetness and leather.  As the cigar burned, the citrus noticed on the pre-light began to shine through, giving off nice flavours of orange and grapefruit, all underwritten with a warm leathery tobacco spice.  Where this cigar became really interesting was the burn.  Throughout it’s 5 inches, after every draw this cigar would stay red-hot for a solid 2-3 minutes; as such, this is a cigar meant to be smoked slowly.  In fact, only on my second attempt at this cigar did I smoke it intentionally slow, and the sweetness and citrus flavours were enhanced and more balanced.  The ash in any case was a light color and held steady, splaying in the second third.

All in all, this medium-bodied stick packs some excellent flavors, especially given its price of roughly $5/stick.  This is a great reflection of a good Nicaraguan cigar, and one definitely worth seeking out.