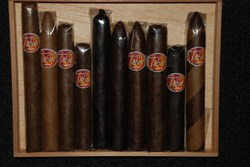 Our Taboo Giveaway Contest ended yesterday.  Thanks to the 150+ people who entered simply by becoming a fan of us on Facebook.  The randomly selected fan who wins the sampler of Taboo cigars is Eric R. (ericant******@gmail.com).  You have email!

There was a bit of a response on Twitter since a lot of the people there don’t have Facebook, so here’s what we’re going to do to give those folks a chance at getting some free cigars.  We still have a fair few Taboo cigars (and order more regularly), so we’re going to put up a tweet today, and any Twitter folks who re-tweet it will be entered to win a 6-pack sampler of Taboo cigars.  This contest will run until April 15; only 1 retweet per person per day.

Some notes:
1) If you are reading this and own/work at a cigar (or related) company and want to promote your business through a contest, please contact us.  Our humidors are emptying at an alarming rate…
2) Must be at least 18 to enter.  US and Canada only.

For those of you big on contests, Buffalo Trace Distillery has a pretty great one going on right now called the “Derby Big Shot Weekend.”  You can win an all expense paid trip to the derby and the distillery.  Find it here.