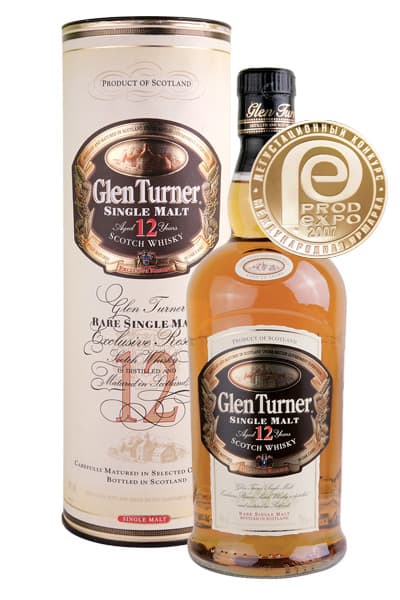 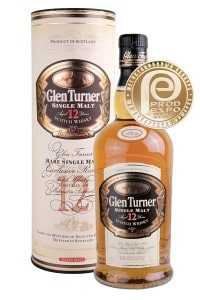 Jean-Pierre Cayard founded Glen Turner in France in 1934; to this day the brand’s identity is slightly confusing.  In 2004, the company moved to a warehousing complex in West Lothian in the UK (at a cost of 15 million quid), where it stores the whiskies purchased and bottled in the 12 and 18 year old “Glen Turner” bottlings.  Only in the last couple years has the West Lothian facility been transitioning to a distillery – so don’t expect whiskies to be released for at least a couple more years.  While the 12 year old I bought at a French supermarket for 15 euros is labeled as single malt scotch whisky, I also saw a bottle labeled as “single highland malt,” which leads me to believe that Glen Turner is bottling anything they can get their hands on until the first whiskies from their West-Lothian plant are ready.  So who knows what you’re getting your hands on when you buy a bottle of Glen Turner, at least for a few more years.

Glen Turner’s owner, La Martiniquaise, isn’t new to this game.  They own Label 5, a whisky available nearly everywhere in France, and purchased the Glen Moray distillery in 2008.   Also, in late 2009 it was rumoured that they might purchase Whyte & Mackay from United Spirits, but nothing came of the rumours.  The bottle we’re reviewing today is labeled as coming from “Glen Turner Distillery Ltd” which is very strange indeed.

First impact on the nose is strong floral notes, followed by a buttery shortbread overtone.  The nose then settles into the smell of a bakery, with sweet vanilla and cinnamon.  The whisky is smooth on the palate, and has a salty sweet character with more hints of cinnamon.  The finish is dry, with a powery icing sugar feel left on the palate.  After adding water, this dram changes coniderably, losing its sweetness and becoming bitter like cheese or old shoes.  Toffee and molasses notes appear on the nose, and a leathery cigar-like finish emerges.  It’s worth a taste, but not something I would drink regularly.

If anyone knows the distillery this whisky is coming from, please make a note in the comments.  Thanks!