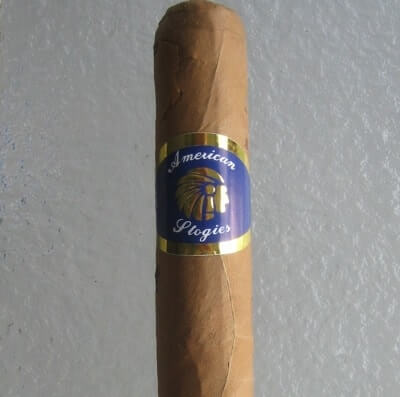 Nestor Plasencia is one of the most influential cigar blenders around.  In addition to developing the Habana2000 wrapper, he has created a variety of blends including Rocky Patel’s Edge and Sungrown.  On top of this, he produces Plasencia Reserva Organica — a 100% organic cigar.  The man is also responsible for the American Stogies line, which he makes for Indianhead.  Marketed as a budget cigar, these can be found in all sized for under $3 just about anywhere.  Last spring I was enticed by the $2 price tag during a trip through the duty-free and picked up a couple.  I figured at the very least they’d be a cigar to take camping, etc.

Build: Handmade with all Nicaraguan wrapper, filler, and binder

Pulling this cigar out of the humidor, it was immediately evident that the cigar is delicately made.  With rough spots all around and a cracked wrapper in several spots, I did my best to overlook the cosmetic flaws and focus on how it smoked.  After making a small preliminary cut, I was shocked at the incredibly easy draw.  In fact, with a cut the size of a pea, the cigar drew with almost zero resistance.  Confused, I checked my humidor in the fear the cigar was overly dry; nope, both hygrometers read 68% as usual.  OK, so it’s cracked and lumpy with no resistance; that doesn’t mean it wouldn’t have great flavour.

After lighting, the cigar burned nicely for a short time with a balanced, if bland, flavor.  After 10 minutes, the burn was already starting to become considerably lopsided, and by 20 minutes, the burn was almost totally sideways.  Add to this that the head was starting to fall apart so every sip of the cigar left tobacco in my mouth, suffice it to say I have had better smoking experiences.  Because I was with a friend smoking a nice  San Cristobal De La Habana, I decided to keep at it for a while.  However, by the 35 minute mark, the head had almost totally disintegrated and the flavor had turned from bland to bland with a hint of bitterness.

For the sake of science, I figured I’d stop and pull the cigar apart.  Sure enough, there were a few large veins and stems in the filler leaves, which were unusually broken up and brittle.  Take a look at the pictures and see for yourself.  Would I smoke this cigar again?  Of course.  I know that the variability from one cigar to the next (even the exact same brand/size) can be considerable.  For smokes in this price range, this variability is even more dramatic.  In fact, I’ve heard of others having success with this same cigar, so I know there’s some good ones out there.  For $2, you’re not guaranteeing yourself a bad cigar, in fact you might get a great cigar.  You are merely increasing your odds of having burn, draw, or other issues.  For the curious, find more reviews of this cigar here and here.