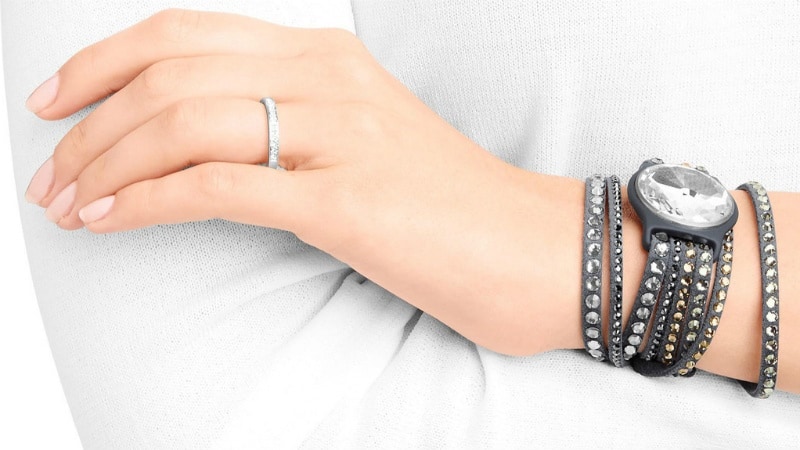 Whether it’s your car connected to the web, the smart meter monitoring your energy use or any of the growing list of the Internet of Things, technology is becoming integrated with almost every aspect of our lives. And recently we have seen that trend extend to jewellery and personal accessories. With everything from wearable tech to smart jewellery, we’ve seen new start-ups battle it out with established names for market share. So let’s have a look at some of the ways that technology has been implemented into our fashion sense and vice versa.

Smart jewellery (sometimes known as tech jewellery) has slowly but steadily been becoming more popular over the last couple of years. Many people love to be connected to their phones and computers but prefer a more discreet option that fits in with their style.

Ringly is one brand that is offering something both attractive and functional. This stunning, chunky ring connects to both iOS and Android phones and provides you with alerts for calls and texts as well as notifications from apps like Facebook, Twitter and Uber. This allows you to keep your phone secure in a bag or pocket while at a restaurant or in a meeting, without having to worry that you’ve missed an important message or call.

Another interesting piece is MICA by Opening Ceremony. This bracelet looks like an expensive and stylish item decorated with semi-precious obsidian and pearls but the truly impressive aspect is found on the inner part of the cuff. Here you’ll find a 1.6 inch OLEF screen that allows you to receive texts and alerts from your phone. This gives the wearer the option to go out without their phone.

It’s not only tech-driven start-ups that are producing smart jewellery – some of the big names are getting in on the action too. World-leading luxury cut glass designers Swarovski have teamed up with Misfit to create the Swarovski Shine – a fitness tracking device that doubles as a shimmering bracelet. This syncs with the Misfit app to allow users to stay on top of their daily activity.

Fossil have also created a fitness tracking accessory. But unlike Swarovski’s bling band, the Q Reveler is understated and designed to not look like tech in the slightest bit.

Of course, smart jewellery is effectively just an extension of some of the wearable tech that has become commonplace. The Apple Watch and other smart watches by brands like Michael Kors and Samsung where one of the first advanced pieces of wearable technology that allow you to interact with your phone from your wrist.

The Fitbit, a sleek activity tracker, measures a range of data such as the number of steps taken, heart rate and even quality of sleep. Despite only being launched in 2008, the company is deemed to be worth more than $4bn.

Headphones as a fashion statement

But wearable tech is not the only way that fashion is invading technology. When luxe fashion designers like Dolce & Gabanna have started producing them, you can understand how important the make and model of headphones are to the style-conscious. Other manufacturers such as Beats by Dre, which was bought by Apple for around $2bn, and Master & Dynamic command prices up to around what you could pay for a laptop.

Just like a handbag or shoes, headphones have gone from being an entirely functional item to a fashion statement. In the same way, smartphones are no longer being designed entirely for their function. Just look at how phones have stopped getting smaller and smaller to make room for larger screens and advanced design features such as the curved Samsung Edge.

Mike James, an independent writer of many years with a recent focus on style – both in the marketing and fashion sectors. For parts of the information in this post, UK jewellery specialist Nirvana Wholesale were consulted.