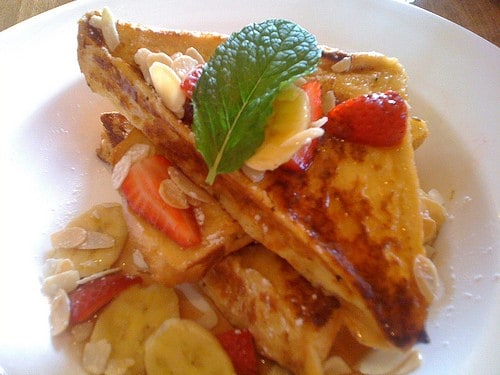 It started out as a means of sustenance or fuel for the body, but in the world of culinary techniques that have been refined and pushed to the extreme, food is now so much more. It can be iconic, gain cult following, and have foodies traveling for miles to sample unique and exciting cuisines. Some dishes and ingredients can also be lavishly extravagant and gain notoriety through their over-the-top outrageousness. Gentlemen with money to burn may want to check out a couple of the dishes on this list.

Who said burgers can’t be fine dining? Head Chef Chris Large at the swanky Honky Tonk restaurant in Chelsea, London, certainly believes that they can be. He is the creator of the Glam Burger, which retails at a staggering £1100. The mouth-wateringly sumptuous ingredients begin with a patty of Kobe beef, which is meat from cows that are fed on beer and massaged to create the perfect fattiness and tenderness. This is topped with Canadian Lobster, Beluga caviar, and a hickory-smoked duck egg among other highly indulgent items. The most expensive element is the grated white truffle, but the bun is also wrapped in edible gold leaves.

Buying the burger will cost quite a few pounds, but you’ll also gain a few if you indulge in it – the meal contains a mammoth 2,618 calories. Probably best to leave this one to the high-rollers that can afford the best personal trainers to help work it off afterwards.

At the time this was just a normal pizza order, but in hindsight, it is the most expensive pizza order of all time. In 2016 Bitcoin has become a widespread success, with 1 Bitcoin equal to £611 pounds at the time of writing. The cryptocurrency has taken the world by storm and now there are sites like online casinos that only accept payments with the Blockchain technology.

The guy who spent 10,000 Bitcoins on two pizzas from Papa John’s in 2010 must not have realised that a few years later people would use Bitcoin to play blackjack online, or shop in Starbucks or Subway – or even pay for their Microsoft Windows apps. Those same two pizzas today would be worth just over £6.1million. Poor old Laszlo Hanyecz must be kicking himself.

The Golden Opulence Sundae is available at Serendipity 3 in New York, and at $1000, it is the most expensive dish of its kind in the world. According to Armand Morin, less than 50 people in the whole world have ordered the extraordinary treat. Like the Glam Burger, every component of this dessert is made up of the best quality ingredients available. The ice-cream is Tahitian, infused with Madagascan vanilla. It contains the most expensive chocolate in the world, and each ball of ice-cream is wrapped in a gold flake. There is even a small bowl of sweet caviar.

These dishes really push the boundaries when it comes to extravagant eating. For most of us who can’t afford these luxuries, though, there are other ways to make your own dishes look just as fancy. Why not back and use this device to make it look like all your food is topped with caviar?