Asthma may be an extremely common condition, but it is also widely misunderstood. Even among those affected by asthma, there is much confusion as to its causes, symptoms, available treatments and so on.

As with most things, the key to taking better control of asthma in general lies in building a better understanding of the condition as a whole. Which begins by acknowledging the fact that far too many longstanding assumptions are not in fact accurate after all.

So with this in mind, what follows is a brief summary of 10 common asthma myths and the respective truths behind them:

This particular myth stems from the fact that asthma is typically diagnosed relatively early in life. Nevertheless, asthma can affect children and adults alike of all ages. What’s more, in instances where children ‘outgrow’ asthma, it can still return at any time in later life. As such, those who experienced asthma as a child are strongly advised to monitor for any signs that the condition may have returned.

Quite to the contrary, the fact that exercise contributes to proactive weight management and a healthy respiratory system in general makes it highly advisable for asthmatics. It is simply a case of keeping it under control – you’d be surprised how many professional athletes also suffer from asthma. What’s more, poor health attributed to a sedentary lifestyle can directly contribute to the development and severity of asthma.

While it’s true to say that smoking doesn’t necessarily cause asthma, it can certainly make the conditioned considerably worse. In fact, both first-hand and second-hand smoke alike can have a harmful effect on the airways and lungs, increasing the likelihood of breathing difficulties and asthma attacks.

The connection between asthma and other allergic diseases is actually very real.  In fact, research has shown that somewhere in the region of 80% of asthma sufferers also have at least one other allergic condition. Allergic rhinitis and eczema being two of the most commonly associated allergies with asthma. 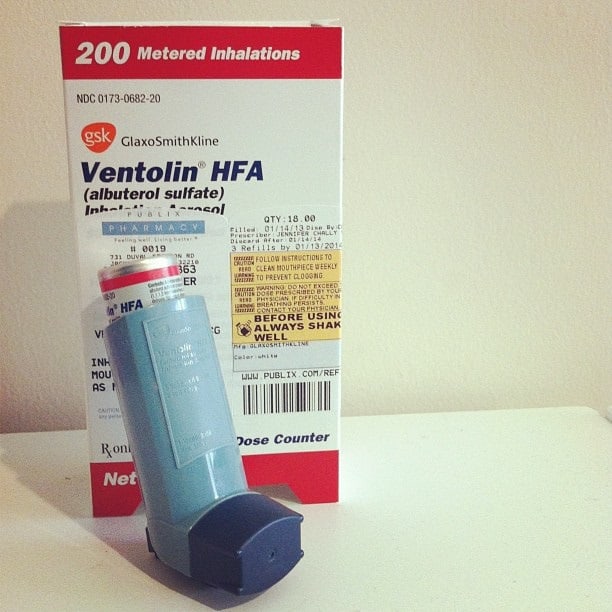 Unfortunately, the presence of asthma in one or both parents significantly increases the likelihood of their children being affected. If neither parent has asthma, a child has around a 6% chance of developing the condition. This increases to 30% where one parent is affected or as high as 70 per cent if both parents are asthmatic.

It’s no coincidence that many asthma sufferers also face problems with various digestive disorders. In fact, up to 70% of asthmatics are also known to suffer from acid reflux. The good news being that where this is the case, treating the digestive disorder can improve the symptoms associated with asthma.

Common inhalers like Ventolin are designed to be used only when immediate relief is required. However, there are also various types of ‘control’ inhalers that are designed to prevent these situations from occurring in the first place. For example, when Salbutamol is used regularly morning and evening, it can significantly reduce the likelihood of asthma attacks and flare-ups in general.

Contrary to popular belief, there is absolutely nothing in the makeup of an asthma inhaler that is addictive. What’s more, asthma inhalers when used correctly are not associated with any dangerous or detrimental side effects. The only time problems can occur is when asthma inhalers are used inappropriately or overused unnecessarily.

In the vast majority of instances, proper management and living a healthy lifestyle can prevent asthma attacks from occurring in the first place. It is simply a case of identifying your own triggers and following the guidelines set out by your doctor. What’s more, using the appropriate inhaler at the first sign of an asthma attack can prevent it from becoming severe or dangerous.

Last but not least, severe asthma attacks that are not quickly brought under control have the potential to be fatal. Which is precisely why it is of critical importance to proactively monitor and control the condition at all times. For those with the severest asthma, ensuring a rescue/emergency inhaler is on hand at all times can literally make the difference between life and death.