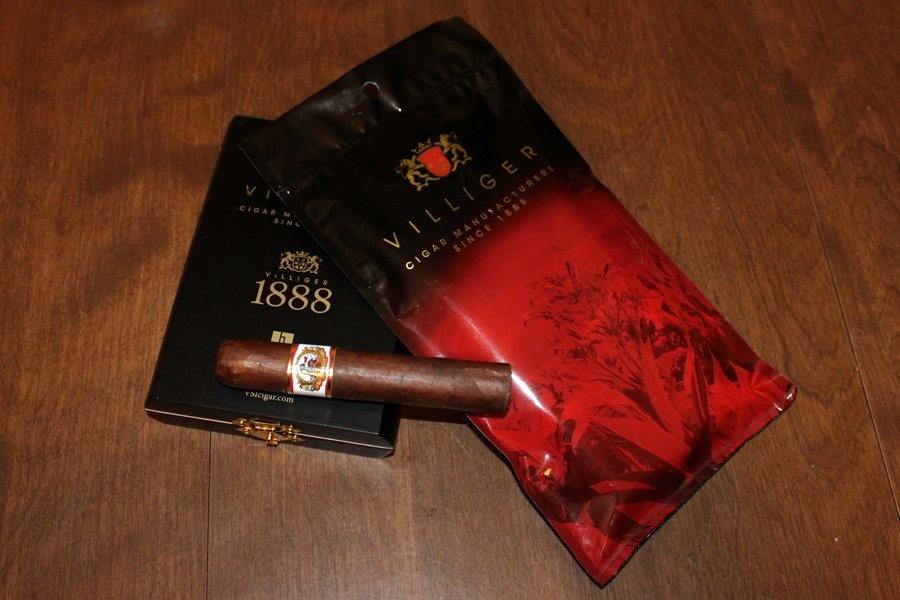 I was offered an excellent chance at a fairly new line of cigars from a company I had not tried, Villiger Stokkebye International’s La Capitana.  VSI has been in the tobacco industry for well over a century, as far back as 1882.  The company was founded by two families, Jean Villiger of Pfeffikon, Switzerland and the Stokkebye family of Denmark.  The two families combined to form VSI, and have been offering their products to the US market for over 30 years with great success.  Villiger cigars sell over 500 million cigars annually, and Stokkebye is an iconic name for pipe enthusiasts.  I myself have a tin of Escudo Navy Deluxe that I break out for cool calm days outside when I want something more subtle to smoke, and it’s become one of the few pipe tobacco’s I smoke regularly.

While VSI isn’t new to tobacco, it only recently started offering premium hand rolled cigars in February of 2009.  Up until then, Villiger has offered high quality machine rolled cigars.  While this may seem like contradiction, VSI’s use of quality tobacco and high production standards ensured that they put out a good product.  Those standards have carried over into their hand rolled cigars.  Proof of that is evident in the long history of success between the two families that continues today, and will show through in this review.

The first cigar in this series of reviews is La Capitana, the newest edition to their lineup.  I was gifted a 4-pack in a handsome sealable bag that served to keep the cigars fresh and protect them with a soft lining built into the bag.  Some call it marketing, but I like it.  The cigars themselves are robusto sized, measuring 5×50.  The wrapper is a rich dark brown, almost black, Habano Colorado leaf with Nicaraguan tobacco for the binder and filler.  There is mild tooth and veins along the wrapper with oil glistening off of the leaf.  The abundance of natural oils also gives it a strong scent that has a heavy earthy tone with bursts of pepper and cedar.

A good torch let me toast the foot quickly, and a good cutter left a nice clean cut at the cap with a smooth draw.  The initial taste is of hardwood smoke and black and red peppers.  Sweet spices soon follow, lasting into a hay-like finish.   The flavors change a little when I roll the smoke on my tongue.  A sweet earthiness develops with the smokiness, blending with the spicy peppery notes.  There’s a little more body and robustness when I do that, but it’s tempered by the earthiness.  As a whole, there’s a nice harmony to the flavors, with some fair consistency.

The flavors change a little as the cigar progresses.  The peppery spices come more to the front, and the cigar starts to build up to become fuller bodied.  The sweetness lends itself to the spicy note as well.  It becomes a warm sweet spice, like when I open my grandmother’s cabinets in her kitchen, right before the strong black peppercorns that she keeps towards the back kick in and give a tingle that builds.  The woody and smoky notes shift towards the finish, and the entire transition is smooth and gradual.

Overall the cigar as very enjoyable and I’m looking forward to seeing these become widely available.  The flavor profile bears some similarity to La Flor Dominicana, but a little milder without such sharp contrasts in flavors.  The cigar definitely builds up to a fuller bodied smoke that’s flavorful without being a powerhouse kick in the teeth of flavor.  While I wish I had smoked on earlier to write about, I think it was better that I let the cigars rest for some time before lighting one up.  It seems the cigar had time to settle, and the flavors are smoother and mingle better because of it.  I’d recommend trying these if you enjoy a flavor profile that’s similar to what LFD offers, but in a smoother and gentler package that still holds robustness in flavor.  The construction was excellent, leading to a slow and even burn that let the cigar last over an hour with steady puffing.  Not once did I have to correct the burn or relight it, and the smoke remained cool and smooth.

I want to give a special thanks to Anne Dinkins from VSI for sending me these cigars to review.  I enjoyed the cigars thoroughly, as much as the Escudo pipe tobacco.  I would highly suggest looking through their website to see what else they offer, as everything I’ve tried from them has been pleasing.