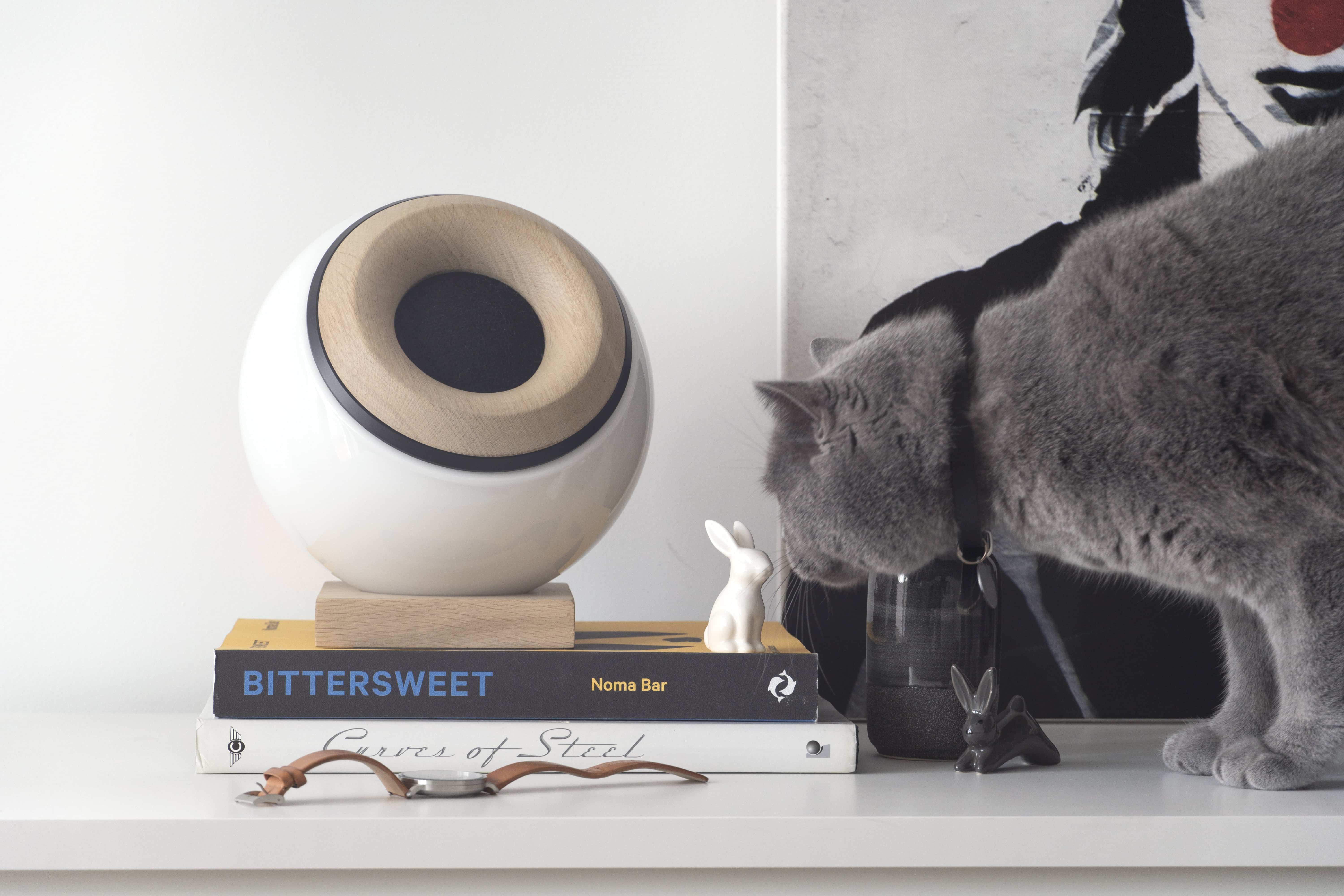 Tech-heads, minimalists and interior designers take note: the premium speaker-meets-smart-lamp Oupio puts you in full control of a room’s ambience. While most hybrid products merely ‘glue’ functions together, the sleek yet timeless Oupio fully integrates high-end sound with lighting that covers the full range of sunlight – enabling it to match our natural circadian rhythm and boost productivity. The Indiegogo crowdfunding campaign to produce a first production run launches 26 June 2019.

The quest for dynamic ambience

“We’re not wired to live in confined spaces with fixed ambiences,” says Vlad Iorgulescu, founder and designer at Oupio. “Ambience should be dynamic and respond to our human needs – so it can have a positive influence on our mood, health and wellbeing.”

“Companies such as Google call the application of these notions ‘neuroaesthetics’. We prefer to call it good design,” says Vlad.

In other words: our living spaces need an update.

“As a product designer, I saw a lot of products that fall under the category ‘future landfill materials’,” says Vlad. “But when we began talking about this to customers of our design and engineering consultancy Creative Pill, we realized it’s a shared desire to build things that last – both in their function and their aesthetic.”

With a background in architecture, Vlad decided to apply this philosophy to product design. Building a small dedicated global team of designers, engineers and audio/electronics specialists, he set out to design a hybrid product that could define a room’s ambiance. Oupio was born.

The resulting spherical object has a diameter of 22 centimeters. Crafted from carefully selected wood (oak, ash or cork), glass (white opal) and anodized aluminum, Oupio is also modular. Its modularity means it can be installed anywhere – whether as a pendant or desk lamp.

More than anything else, sound and light define a room’s ambience. “Yes, air quality is another important factor, and early prototypes did actually include sensors. But then we decided to keep things simple,” chuckles Vlad.

In fact, fully integrating sound with light is not simple at all: “They don’t like being together in the same small space. For example, the LED drivers create noise and the LEDs themselves generate a lot of heat that we needed to dissipate so it would not interfere with the sound.”

Such challenges explain why somewhat similar existing products on the market are not true hybrids but merely ‘glue’ together different functions into one object. With the glass lamp shade doubling as the actual acoustic chamber, Oupio is a true hybrid.

‘Human-centric lighting’ is a term that is gaining traction. Scientific studies have shown that the moon’s white light boosts productivity, while sunset yellows boost melatonin production for a restful night’s sleep.

By using twenty 1-watt LEDs, Oupio covers the full spectrum of natural sunlight (2,700K to 6,000K). “If the Indiegogo campaign is particularly successful we hope, as a stretch goal, to apply RGB LEDs for the initial production run – so by flickering these, we can for example simulate fireplace lighting,” says Vlad.

However, current functionality is already impressive: producing up to 2,000 lumens makes it perfect for a modest living room or a large bedroom. With the LEDs designed for a lifetime of at least 10,000 hours, you’ll never have to change a lightbulb again.

Audiophiles will be particularly impressed by the many interesting tech and design choices made by the Oupio team.

Using the patented Balance Mode Radiator technology from sound innovators Tectonic Audio Labs, which ensures the sound is distributed evenly throughout a room, and drivers that are placed in a way that turns them into a virtual coaxial driver, Oupio offers high-fidelity, well-balanced sound with plenty of bass and clarity. While covering a wide range of frequencies (65Hz to 20KHz), you can also crank it up enough to annoy the neighbours (90dB).

Music streaming is done via Bluetooth or audio cable, while Oupio’s various functions can be controlled via the intuitive touch interface. Groups of up to five units can be made via a dedicated low-latency WiFi network.

Vlad Iorgulescu started his professional life as an architect in 2006. He worked as an architect for five years before pivoting to Industrial Design. From 2011 onward he dedicated his time to designing products instead of buildings. In 2012, together with his brother Mathew, they started Creative Pill, a design and engineering consultancy company.

During his professional life as a product designer, Vlad was involved in several projects, ranging from industrial robots like the Matt Delta Robot to more simple devices like the EPH Controls range of thermostats.

However, not all products were as meaningful as these two projects. Frustrated by the amount of time and energy poured into designing what he calls “Future Landfill Material”, he decided to start a new brand, called Oupio, in 2017.

With Oupio, Vlad’s goal is to build long lasting products that bring a positive impact to people’s lives, using empathy, sustainability and technology as the three main pillars of design.

Since the launch of their campaign, Oupio has been the subject of some rave reviews. Wallpaper magazine describes Oupio’s hybrid tech as: “Guided by Dieter Rams’ Ten Principles of Good Design and the motto ‘own less, do more’, this spherical shell of white opal glass houses two pieces of sensory tech together.”

“The ambitious brand Oupio pushes us towards the future where products merge technology with interior design principles and human centric values. At the same time Bluetooth Speaker and a Smart Lamp, Oupio is ready to amaze us!” says FeelDesain. “The result is a hybrid product that enable people to gain control over the ambiance of interior spaces. Gadgets have invaded our lives and our homes, so sometimes people need to own less, looking for functionality.

“Appealing to technology enthusiasts, minimalists and interior designers, the premium speaker-meets-smart-lamp Oupio is essentially a nice integrated concept that allows the user to have full control of a room’s ambience,” reports Audio Xpress.

And as Minimalism Life formulates it: “Oupio is a new brand of product that is catering to the minimalist community by combining two vital technologies in our lives while simultaneously bettering our mental and physical health. At surface level, Oupio’s light and speaker combination looks like an appropriate and sensible addition to a minimalist’s decor inventory. However, this product goes deeper than decor. The thought and technology behind the lighting is catered towards the human being’s experience instead of catering our experience to technology.”

Fund and purchase via Indiegogo

On 26 June 2019, Oupio will launched their 30-day Indiegogo campaign – complete with special rewards and heavily discounted rates. The company seeks to raise 50,000 euros to realize the first production run. The first Oupio’s are scheduled for shipment in July 2020.