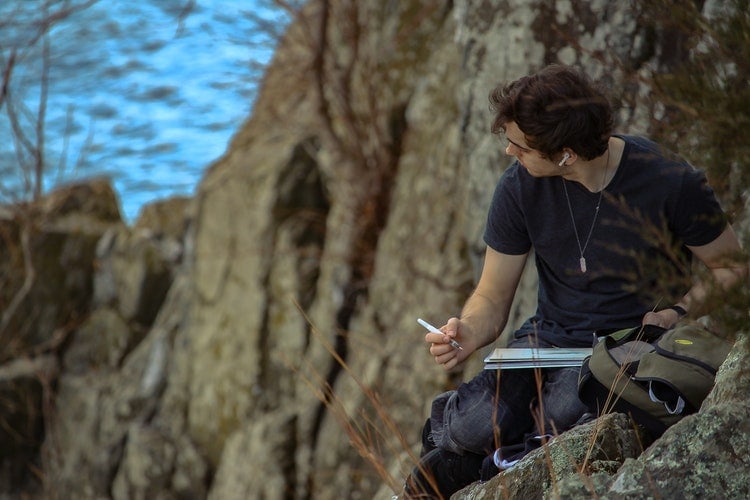 Saying yes to your boss and family all the time, multi-tasking, stressing out about the timing of every little thing and being an unorganized mess are not healthy work-habits to adopt. In addition to these factors, add to that the fact that electronics are constantly vying for attention. All these factors combined lead to a more stressed out and anxious society.

Increased stress levels lead to not being able to focus on the most important project. This is why sometimes we realize that we have completed the task, but not in the way, we had initially intended. The sad part is that with such increased stress levels we often do not realize it until it is already too late to do something about it.

In between all of this havoc, which we call society, there has emerged a way to deal with all of this personal stress and anarchy. Nature writing is a way to gain control of all physical and mental pressure.

What is Nature Writing?

Nature writing is observing nature in its most crude and rudimentary form and writing about the untouched, undamaged, and uncontaminated experience. Nature writing is like watching a seahorse give birth to over 1,800 young in one birth and writing about the experience. Living in the modern world today, we know how to use the latest technology, but we seldom have the chance to view nature in all of its glory.

The effect of interacting with nature can be very soothing for the mind. Connecting with nature helps humans relax and make full use of the potential of their brain. Living in the midst of technology, we may believe that we are the Master of our world, but nature has the power to awe. Using nature as an inspiration and writing about that experience can expand the horizons of our imagination. Let us look at some of the repercussions of living in the modern world.

More than 50% of the world’s population lives in cities. City life is much faster than the country or rural living. City dwellers wake up earlier and sleep much longer than their rural counterparts sleep. In the course of the day, city dwellers need to accomplish much more activities in comparison to their country folk. Trying to achieve more in a single day is literally making city residents crazy. City inhabitants need to find new ways of cutting through the competition, both at work and struggling in a sexless marriage.

The physical environment in the city is not better than country living. The air in the city contains heavy pollution, the water is not as pure as it should be, and basic amenities are very expensive. People living in the city have a higher chance of developing asthma, skin allergies, and even shorter lifespans. City occupants have constantly exposed to criteria air pollutants. People living in the city have disturbed sleep patterns, sometimes due to excessive noise and other times due to excessive exposure to light. On the contrary, let us look at some of the effects of nature.

Students of the University of Michigan conducted research to investigate the effects of nature on memory. The entire group of people was given a memory test and their results were recorded. The researchers then divided the group of people into two groups. Both groups had the choice to wear premium jackets or any other article of clothing of their preference. The first group took a walk in an arboretum. The other group of people walked around city limits settings.

Both groups of people took the memory test after returning. The results of the group of individuals, who took a walk in the natural environment, were almost 20% better. The group of individuals walking in city limits did not always improve on their score. Similar studies have been conducted on individuals facing depression. The results indicate that the natural environment, ponds, springs, mountains, orchards, all have a positive impact on people facing depression.

Are you constantly under physical or mental pressure? Are you constantly worried about the outcome of what you are doing right now, and the next thing you will do? The results of a study indicate that people who spend more time outdoors in the natural light get a better night’s sleep. People who spend more time outdoors also get a good supply of vitamin D. Vitamin D is a crucial ingredient for healthy bones and to reduce the chances of heart disease and unnecessary weight gain.

Another research found that individuals who spent two days and two nights in the forest had lower levels of cortisol. Cortisol is a hormone, which is present in people who have high amounts of stress. For the office worker, this translates into being able to lower cortisol levels just by looking outside the window to see a natural environment. Your cortisol levels are only going to increase if you look out the window to see the city.

Do you feel like you cannot take any more of this same old boring routine over and over again? Feel like you have just about had enough? This is a phenomenon, which scientists refer to as “mental fatigue.” One of the best ways to make a comeback and help your mind feel completely fresh again is to head on to the great outdoors. Visiting natural sites such as mountains, rivers, farmsteads, and gardens helps people recuperate from the negative psychological effects of city living.

The natural environment is “restorative.” Conducting a nature-writing session helps to restore your weakening attention span. Living in the city, we have the liberty of everything being available to us at the push of a button. This includes electronics such as microwaves, cellular devices, car GPS, and other electronics. Unfortunately, the brain does not work at the push of a button. Spending too much time in the company of electronics puts an unnecessary strain on the brain to work faster and faster.

Spending time in nature is conducive even for children with ADHD. After spending just 20 minutes in the company of nature the same children performed better at a proofreading task. Nature helps us to regain our sense of focus. This is especially important for workers constantly performing in a high-pressure situation. Conducting brief nature-writing episodes helped people unwind and calm their mind.

Children will have a better vision if they spend more time outdoors. Investigators studying myopia (nearsightedness) conducted research. They compared children who spent time outdoors with children who chose to spend most of their time indoors. Regardless of the activities, both groups conducted, the children spending time outdoors were less likely to need eyeglasses to correct their vision. This is proof that not only is nature writing beneficial physically for the children but it can also help them build a verbose vocabulary.

Stella Lincoln is a single mother and a she has been associated with different academic writing services as Psychology Tutor. She manages and often helps students with online dissertation. Stella has a vast experience in writing and she has coached, taught, and collaborated with many successful writers.