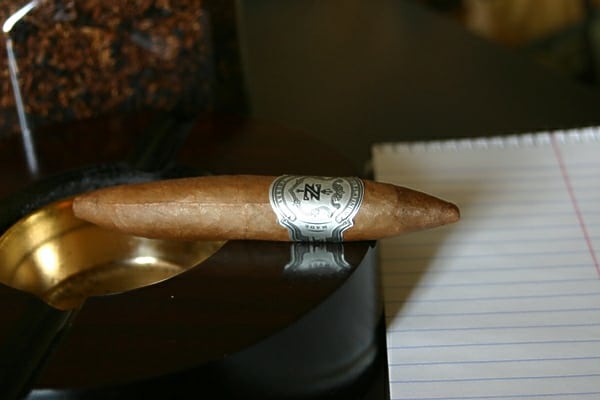 Zino  cigars; the name is known for style, flash, and modern appeal.  It was created by Davidoff and two marketing groups in 2003 that wanted to create a cigar that would speak to the more stylish and sophisticated modern hip-hop culture.   Two lines were originally created: the Crown and the Scepter line.  The Crown line was created for clientele with high demands and expectations, while the Scepter was created to be more affordable but without sacrificing quality in the product.  The cigar that was given to me for review was the Chubby, a small perfecto measuring 5×54, and part of the Scepter line.  The wrapper is Ecuadorian with a Connecticut binder and blend of Dominican and Peruvian filler. 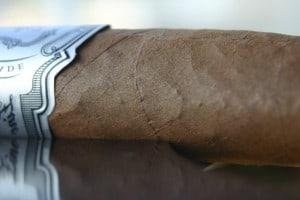 The cigar is a work of art in terms of appearance.  The wrapper is very mildly veined with a light shade of brown and more of a tan color.  It has no visible flaws at all, the wrapper smooth and soft looking, devoid of any cracks, looseness, or poor rolling.  It feels as smooth and soft as it looks, feeling more like finely brushed velvet and bordering on a silken texture and softness.  It’s hard to believe that this is actually a tobacco leaf with how soft it feels.  The band gives it a very classy look and draws the eye to the cigar.  The silver doesn’t clash with the cigar, and the light shade of the wrapper flows with it.  To my surprise, the cigar doesn’t have much of a scent to it.  I have to hold it close to my nose in order to pick up its scent.  It’s sweet and earthy, with a mix of rich soil and mild tobacco with a slight cedary note.  I can’t stress how light the scent is, even when lit. 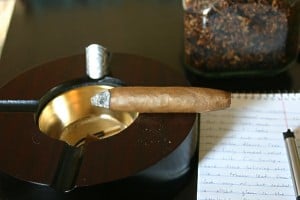 Cutting the cigar is very easy, with enough resistance to show that it’s well packed with tobacco.  Lighting it is quite easy, the tapered end needing only a single match to get it going.  The easy draw brings plentiful amounts of smoke that’s cool and without any bite.  Overall it shows excellent construction and quality.  The flavor, however, leaves me a bit wanting and disappointed.  The flavor profile isn’t something I’ve come across too often.  It’s a mix of spice, earth, coffee, cedar, herbs, and hay.  At first the flavors clash together with no real rhyme or reason, just banging against each other.  It isn’t until the first inch that the flavors seem to settle and I could pick out the flavors from one another. 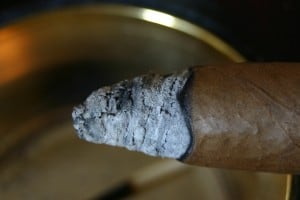 I start to pick up earth and mild sweet spices with a coffee note in the background.  The earth and spice are most noticeable immediately on the tongue and again when exhaling, and builds into a nice red pepper heat as the cigar progresses.  Notes of cedar and oak are thrown into the initial flavors and last throughout the cigar, getting a little stronger further on.  The finish is fairly consistent, with an herbal and haylike taste that mixes with the woodiness.  After the halfway point of the cigar, I notice that the finish becomes more like green herbs and the hay is more pronounced. 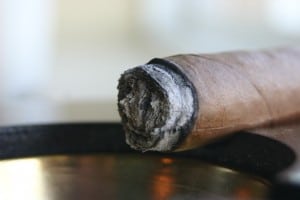 I have to be honest, I wasn’t a fan of the flavor profile.  I thought that the earth and spice was nice when the spices became more peppery, but it clashed with the other flavors, especially in the beginning where the coffee was more noticeable.  The finish didn’t sit well with me either.  It wasn’t an herbal twang like La Flor Dominicana cigars, it was more of a green flavor like produce, and the haylike aftertaste it left wasn’t pleasant either.    The construction and appearance are top notch, but the flavor was lacking in terms of harmony.  I was a bit disappointed by this cigar, especially considering the reputation that the Zino brand has. 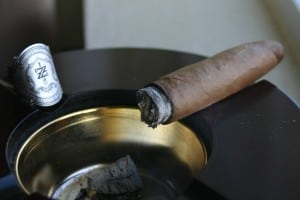 You can find these cigars for approximately $145 for a box of 12, or roughly $12 per cigar at Tex Cigars.  What you get is a very well made cigar that’s packaged beautifully in metal tins.  However, for the price I expect a better flavor profile that will really impress me.  Unfortunately for me, that’s not the case. For that amount of money I’d rather get a Padron 1964 Anniversary Diplomatico.  Again, that’s a personal preference, and you may enjoy this cigar; the only real way to know is to try one yourself. 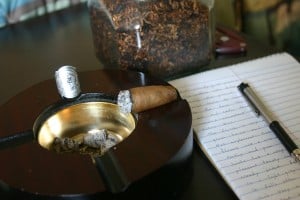 I’d like to thank Jarrod at Tex Cigars for sending me two of these to try out.  I didn’t find them to my liking, but I’m very grateful for chance to expand my palate.