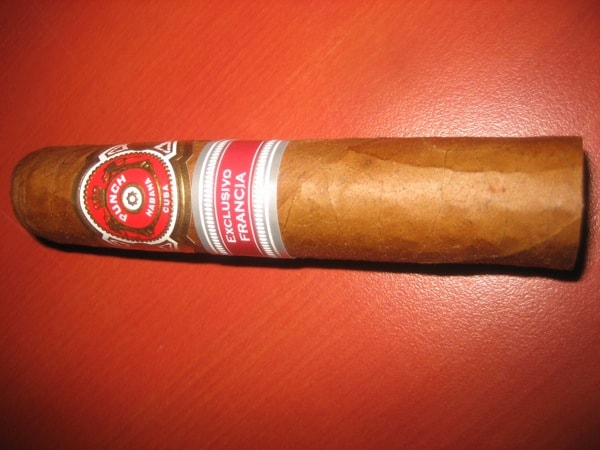 We recently reviewed the Bolivar Petit Libertador, a 2008 Habanos SA regional edition (France).  As a sequel, we now review the Punch Small Club, a 2009 regional of the same size (102mm, or 4”, by 50), but with surprisingly different flavour profile. As with the Bolivar, you can buy these online from just about anywhere in the world, but you’ll be best off buying them in person in France, where they go for around 10 Euros.  Strangely, this cigar isn’t included on most online lists of 2009 regional editions (edición regional), nor is it on the official French tobacco price list.  Very strange; it appears they were intended for the Benelux region (Belgium/Luxembourg), but in the end they were allocated to France.  Nonetheless, they are widely available for sale in cigar shops throughout France.  Here’s the official blurb on the cigar.

A brand new size for this French 2009 Regional Production. Released in 8000 boxes of 10 cigars, this ‘Petit Robustos’ type cigar smokes very directly and heats up to an intensity rarely found in Cubans today.

Here’s what we thought:  The construction is nice at first glance, but closer inspection reveals several large veins just below the surface (more on this later).  The pre-light aroma is balanced, with nice cedary tones.  Starts off sweet, with a healthy dose of pepper, and finishes off even stronger.  Definitely one of the strongest, pepperiest cigars I’ve ever had my hands on.  Despite the strength, many other flavours come and go throughout the cigar’s duration, ranging from a light floral sweetness to a woody earthiness.

Where this cigar faulted was the burn.  At one point it began to tunnel (inside burns, but wrapper does not) so badly, that it had holes in the wrapper.  The cigar took continual touch-ups to keep from burning smoothly.  That, combined with the overly intense body near the end, left me glad when this cigar was over.  Perhaps the burn issues are a results of poor storage on the part of the retailer, but for this price there are many cigars I’d prefer, for instance the Bolivar mentioned above…