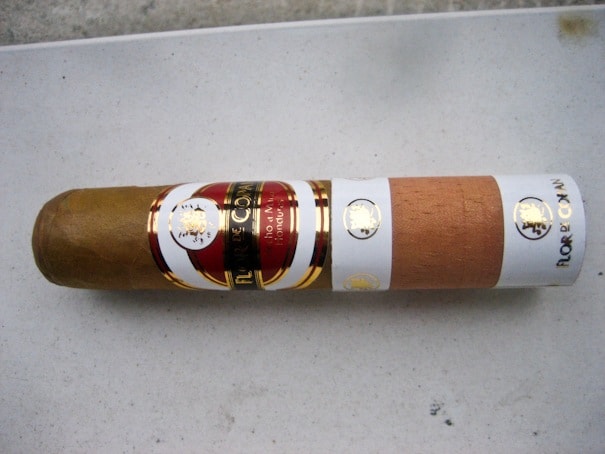 Cigars vary considerably in appearance, from unbanded and deformed cheroots to the most elegantly packaged boutique brands.  The Flor de Copan brand falls nearer the latter, with each cigar delicately wrapped in its own cedar sheath held together by two bands on either end.  This cedar wrap is in addition to a more traditional band near to the cigar’s foot.  While this could potentially be used as a tactic for hiding flawed wrapper leaves, this was not the case for this cigar, whose construction and aesthetic beauty are superb; the taste, on the other hand, leaves much to be desired.

Flor de Copan cigars, an Altadis brand, are hand-made in Honduras with Honduran wrapper, binder, and filler, with a little Nicaraguan filler thrown in for good measure. The cigar reviewed in this article is the Short Robusto, coming in at 50 by 4” in a tube, and costing about $8, although some online shops sell bundles for much less.

After removing the cedar sheath, a light wrapper free from imperfections was revealed.  Pre-draw was cedary, with a light earthiness, and the cut and light were without issue.  The cigar started off exceedingly mild, with moderate volumes of smoke.  While I expected cedar flavours in abundance (given the cigar’s packaging and pre-draw), I was sadly disappointed that the cigar offered little more.  After the first third, little had changed;  second third, more of the same.  Last third, a rise in bitterness, but otherwise the same.  All in all, this stick was beautiful both in its appearance and construction, but its good looks just aren’t enough to compensate for its boring, one-dimensional flavour profile.