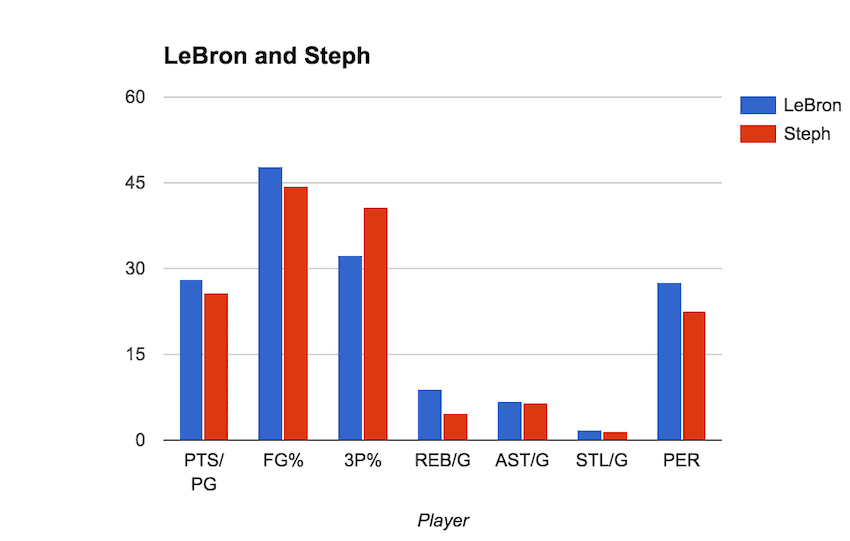 Scenario: You’re an NBA head coach. Your team is in the NBA Finals. It’s Game 7. There are five seconds and your team is down by one. You can pick any player in the world to take the final shot on your behalf.

Who ya got: LeBron James or Stephen Curry?

In the grand scheme of things, this isn’t even a competition. LeBron James has the more extensive resume. He is fourth all time in postseason minutes played, and he owns the third-highest playoff PER in NBA history, trailing only Michael Jordan and George Mikan.

Pit Curry’s career numbers against James, and there’s no question who your guy is.

Curry has the edge in the three-point department but that’s about it. He doesn’t even have the advantage in assists. It’s a slight advantage but an advantage nonetheless, which is a further testament to how valuable James is.

He’s a small forward in a power forward’s body with the vision of a point guard. There has never been anyone in the league like him. He is a hybrid of Michael Jordan and Magic Johnson—if either Magic or MJ had the chiseled physique of a Greek God and the explosion of a fully-fueled rocket.

Stick to right now, though, and the Steph-LeBron question incites a real debate.

Curry is arguably the best point guard in the game. Chris Paul, Russell Westbrook, John Wall and James Harden can take the crown on any given night, but when you look at the way Curry blends volume and efficiency, you realize he has no parallel peer.

Here’s the list of every player to post a career playoff true shooting percentage—combined measurement of two-point, three-point and free-throw efficiency—better than 59 while also notching a usage rate north of 29:

Kids aren’t growing up to mimic Jordan or Kobe Bryant. This generation isn’t even growing up to mirror LeBron. They’re striving to be the next Curry—the heir to the human flamethrower who can make shots from anywhere, on a whim, while also breaking down defenses off the dribble.

And yet, even now, you still don’t want him over James.

Sure, LeBron is 32, in his 14th season and playing way too many minutes. But normal rules don’t apply to him. Screw age. He is the Cleveland Cavaliers’ point guard, small forward, power forward and sometimes center.

He doesn’t just lead them in assists; he is one of their best rebounders and probably their best rim protector. He hustles his ass off on defense in ways Curry can’t; the two-time MVP doesn’t have the size, or strength, or spring-loaded legs to rack up chase-down blocks. He does the best he can with what he’s got, playing passing lanes and pick-pocketing unsuspecting opponents, but James is by far the better overall player.

What other talent can just flip a switch on a dime?

In the playoffs, if LeBron wants to reach the rim, he will—and then he’ll shoot better than 70 percent on those looks. If he wants to start hitting threes at above-average clips, he will. And if he wants to defend like Kawhi Leonard for a quarter, or game, or series, or an entire postseason, he’ll do just that.

Forget Curry. Forget anyone else in today’s NBA. Hell, forget players of years past.

LeBron has no competition as long as he remains in his prime and that includes Jordan. Rings and other stupid-ass arguments aside, he is the greatest player the NBA has ever seen. Hence why, in all actuality, there’s nothing to debate when pitting him against Curry.

Not now, not ever.