Coffee is more than just a beverage. Coffee is a way to make it through the relentless, sleepy mornings that plague everyone who stayed up late to watch Jimmy Fallon the night before. Everyone knows that the key to coffee’s uncanny popularity is it’s concentrated dosage of chemical energy: caffeine. What many people don’t realize, is that caffeine doesn’t actually turn you into a superhero. In fact, caffeine has many negative effects on the human body. If you’re a self-proclaimed “Starbucks addict,” you may want to read up on what you’re really putting in your body.

Can Your Heart Handle It?

Consuming too much caffeine can raise blood pressure to dangerous levels, especially if you’ve already developed hypertension or other causes of high blood pressure. Two tests were performed to evaluate the effect of a single and a double dose of caffeine on people with existing hypertension. In both cases, blood pressures were elevated for over two hours after ingesting caffeine. A similar test linked caffeine to an increased chance of heart attacks in young adults with mild hypertension.

Insomnia is one of the most frustrating and debilitating health conditions because without sleep, people may become increasingly aggressive, lack in patience, and even face impaired decision-making. The only way to prevent caffeine-induced insomnia is to stop drinking coffee late in the day. Although grinding through a late-night workload may seem like a good idea, you’re better off catching forty winks and calling it a night.

Drinking coffee on an empty stomach can accelerate the production of Hydrochloric Acid (HCl). This can become problematic when it comes time to sit down and eat lunch. If your body has already produced HCl, it may have difficulty producing enough to fully digest your food. Proteins that don’t break down during digestion can cause an array of problems including gastrointestinal discomfort, bloating/gas, or even lead to irritable bowel syndrome (IBS). 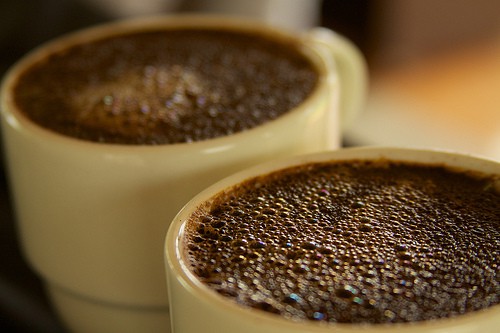 Photo by McKay Savage via Flckr

When drinking coffee, too much of a good thing is almost guaranteed to become a bad thing. For example, coffee has been proven to help alleviate or decrease headaches when consumed in small amounts. However, if you drink more than two cups of coffee, you may find yourself with a headache or even worse, the onset of a migraine. Continuing to drink coffee despite headaches and migraines increases the frequency of acquiring this painful, albeit temporary condition.

Coffee affects iron absorption, which in turn affects the way your kidneys retain important minerals like calcium and zinc. It also affects magnesium absorption and retention, which is troubling because without magnesium our bodies are unable to maintain scheduled bowel movements. Most people’s diets already negatively affect our bodies, so depleting it of minerals only throws another wrench in the cogs of your health. If you find yourself feeling off, and you can’t seem to pinpoint why, reaching a doctor through an app like Curely, can be a cheap and effective means of gaining some real insight into your health problems.

Next time you’re sipping on a cup of coffee, remember that the caffeine giving you energy to make it through the day, might be stealing time from the bigger picture. Everyone loves caffeine, just be sure it’s loving you back.