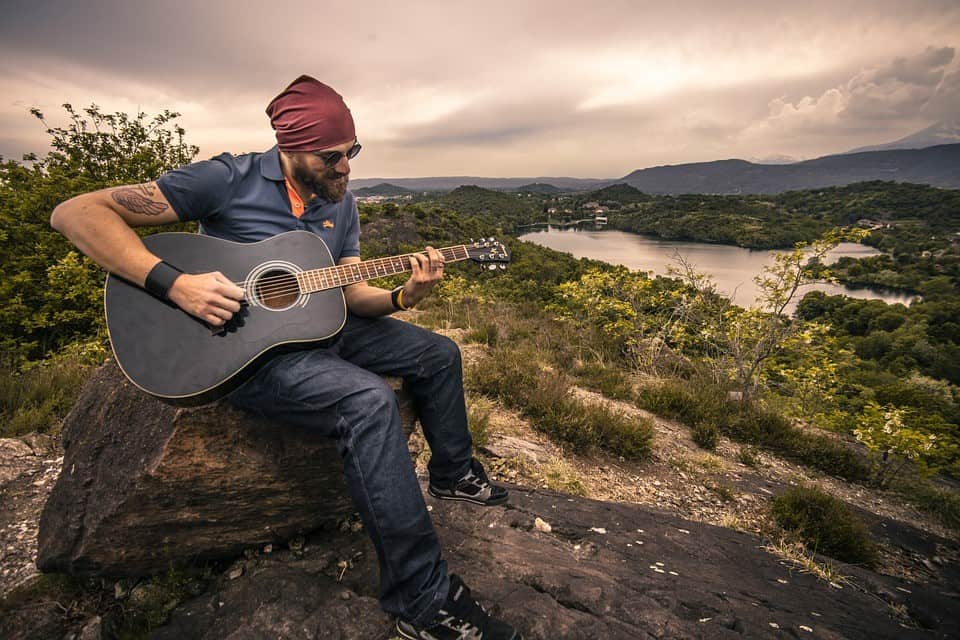 At some point in their lives, most men dabble with the idea of playing the guitar. Some go as far as to buy the guitar and the amp itself, often at considerable expense. But they soon discover that strumming like Jimi Hendrix and Eric Clapton is harder than they imagined.

The first thing to point out is that these legends of guitar literally dedicated their lives to their craft. Their superhuman abilities didn’t emerge from the odd practice session on a Monday evening. They got good at what they did from playing hour after hour, day after day, usually from a very young age.

The good news is that grown men who want to play the guitar have more advice than ever available to them on how to get started and emulate their heroes.

Don’t Worry About Your Gear

The first thing to recognize, according to professional guitarist AJ Himmler, is that buying a more expensive guitar or amp won’t make you a better guitar player. In fact, you could be so shy about the fact that you just blew over a thousand dollars on equipment that you’re afraid to show off your skills for fear of being called a money waster. A much better approach is to go with something dirt cheap or, better still, second hand and go from there. Make sure you’re comfortable with it, for example, the best guitar if you have big hands is probably a Gretsch or a Cordoba as opposed to a Fender or a Les Paul. So long as the kit works, you’ve got something you can practice on.

There’s a good chance you want to get into guitar playing because you admire the skill that goes into pulling off an amazing guitar solo. Often, when you hit the guitar shop, you’ll find a bunch of people there who can jam like Hendrix. But don’t let that put you off.

It’s important to remember that when you’re first getting started, practically everybody will be better than you. If a professional is playing a riff at 200 beats per minute, don’t let that stress you out. It’s not a competition to see who can play the fastest riff. It’s about developing your own personal skills so that you can enjoy the music that fast tempos create.

Learn To Tune Your Instrument Properly

There’s no point playing an instrument that’s out of tune. The sound it produces is awful and you, as the player, don’t get any satisfaction. According to George Ramsay at Bold Music, there are multiple ways to tune a guitar, from standard tuning to drop D tuning. The type of tuning you use will depend largely on the kind of music you want to play, be it rock and roll, acoustic, or as a backing instrumentalist for singers.

A surefire way to kill your drive is to play mindless chord progressions and arpeggios over and over again. A much better technique, according to AJ, is to focus on playing songs: the harder, the better. Learning to play songs is the whole point of why you got into guitar in the first place. Try to feel your way to the music and the finger movements will take care of themselves.

It’s important to remember that when you’re first getting started, practically everybody will be better than you. If a professional is playing a riff at 200 beats per minute, don’t let that stress you out. It’s not a competition to see who can play the fastest riff. It’s about developing your own personal skills so that you can enjoy the music that fast tempos create.