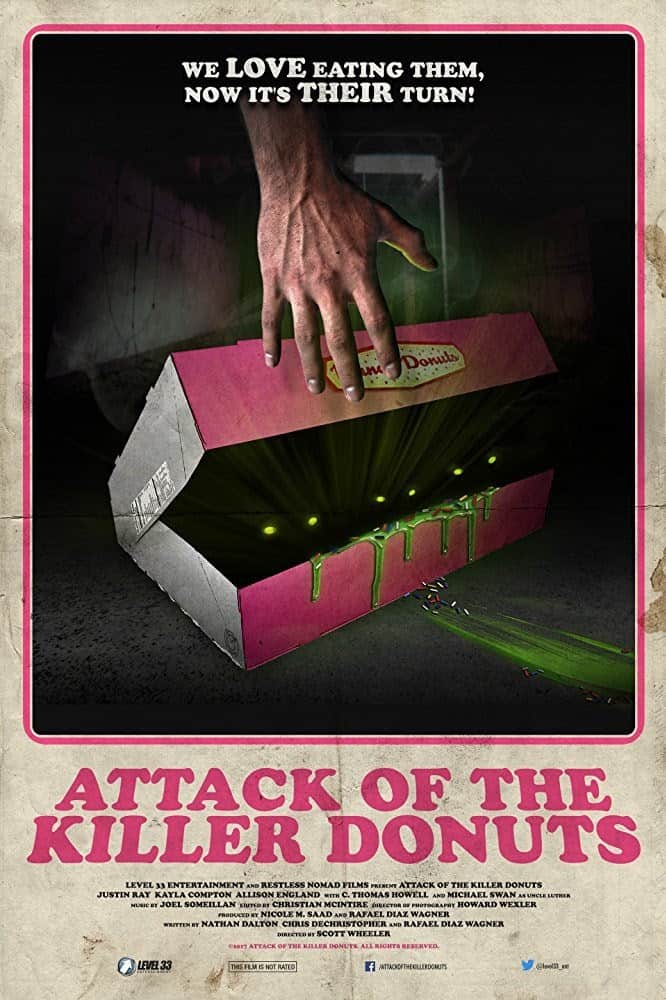 Some of us are old enough to remember the golden age of Horror-Comedy movies. Or, conversely, some of us in the under-30 crowd are hip enough to know about them and maybe love some of them as the classics they are.

The genre has really been around since the 1920’s starting with “Haunted Spooks” way back in 1920, but it really started picking up steam in the 1970’s, and hit a huge peak in the 1980’s. From the amusing antics of Abbot and Costellos’s various contributions to the genre to racy classics such as 1975’s “The Rocky Horror Picture Show” to the total zaniness of 1984’s “Ghostbusters” and 1988’s “Beetlejuice” these movies have been the favorites of millions upon millions, but since the late ‘90s many people feel that the genre has been in decline.

The good people over at Level 33 Entertainment propose to bring it back in full force, however, with their latest offering, “Attack of the Killer Donuts”. Let’s face it: there are lots of people trying and failing to imitate this classic genre as of late, but few manage to even hold a candle to the movies that have come before them. We feel that “Attack of the Killer Donuts” is one of the few, and even among the top of that few.

The problem with reviewing a movie is always how to talk about it without spoiling, which we definitely don’t want to do, but you can watch the trailer here.

Just to sum up, once again without going anywhere near spoiling this film, we feel that “Attack of the Killer Donuts” is in many ways the best of both worlds. You get 2017 technology and graphics (nothing like this sorry level of 1980s FX), combined with the feel and acting of a 1980’s era comedic thriller-chiller-killer. We have to give kudos to the people involved in making this film for really capturing the essence of the genre in all it’s over-the-top glory. These people clearly have understood what made the genre so great and so eminently watchable in the first place, and that’s why the film is a cut above.

Suffice it to say, fans of these kinds of movies will not be disappointed, and a lot of potential new fans should check it out just to see what it’s about; you may find yourself pleasantly hooked on a new hobby.