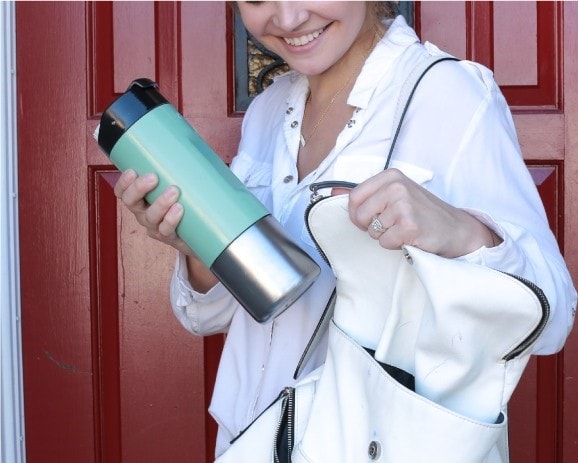 Hydration or caffeination? The daily struggle is real.

For many of us, the day has not truly begun until a nice, hot cup of coffee goes down the hatch. And while we have all heard that 8-10 cups of water a day is the ticket to hydration, it is not always the first priority. When it comes to making the choice between packing a water bottle or coffee mug before heading off to that 9 a.m. meeting or three-hour history lecture, coffee often wins.

But, this dilemma is soon to come to an end. A Chicago-based company has invented a water bottle and coffee mug in one vessel to eliminate this tough choice and keep coffee drinkers hydrated. H2Joe launched their eponymous product on Kickstarter on February 12 with a funding goal of $20,000 USD, which they met in just two hours.

To accommodate two liquids, H2Joe is a bit larger than your typical water bottle or travel mug. But, it does hold 24 oz of liquid at two different temperatures after all. The bottle holds up to 12 ounces of hot coffee (a tall at Starbucks) and 12 ounces of cold water simultaneously in separate easy-to-fill detachable chambers. H2Joe keeps coffee hot for six hours and water cold for eight hours. 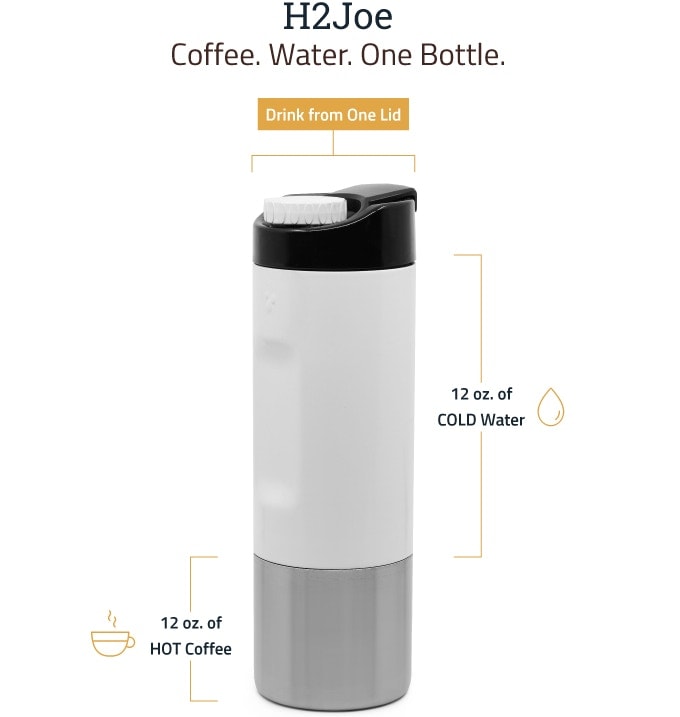 The bottle has also been thoughtfully designed with a lid that has two distinct openings for each liquid. The patent-pending SIPSWIG lid accomplishes a natural drinking experience by allowing users to drink coffee like a mug and water from a spout.

Founded by Brett Moody and John Anthony, two self-proclaimed coffee addicts, H2Joe aims to tackle dehydration one coffee drinker at a time. Despite proper hydration being well-cited as a measure of good health, 75% of Americans are chronically dehydrated. Dehydration may not seem like a serious issue but it can be. Dehydration can lead to several adverse effects including to bad breath, dry skin, flushed skin,  headaches, low mood, fatigue, and affect our ability to concentrate and focus. Our bodies are 80 percent water, so it’s no wonder we need to constantly be replenishing that volume.

While coffee is no longer known to be a dehydrator, most people don’t drink 8-10 glasses of coffee a day.

The company said part of their mission was to satisfy both a love for coffee and the need for water. With H2Joe, they have set out to address the guilt of not drinking enough water with a convenient two-drink mug.

“I often forgot my water bottle altogether but had no problem refilling my coffee mug all day long. By the time I got home, I’d be caffeinated, dehydrated and feeling guilty that I didn’t make the time to drink water,” said co-founder Brett Moody in a press release issued by the company.

Over the years, as their coffee addiction grew, Brett’s wife, Dorothy, came up with an idea. “She said to me, ‘someone needs to invent a bottle that holds coffee and water at the same time’,” said Moody.

Moody and his wife longed for a solution that would allow for transporting both water and coffee at the same time. And their rapid Kickstarter success would suggest they are not alone.

Brett didn’t exactly jump on a solution at first but by 2017, Dorothy’s patience was running out. She asked her husband, “Are we going to develop this coffee/water bottle or not? I need this thing in my life!”

It was then that Brett introduced the idea to John, his longtime friend, and colleague.

“Brett and I had worked together a few years back. So when he approached me with the idea to me, I immediately jumped on,” said co-founder John Anthony. “We work together well so I knew we could come up with something good. A few prototypes and many sleepless nights later, and we created H2Joe.”

Both Moody and Anthony worked on several iterations of the design before coming up with the one currently being offered on Kickstarter.

“When we designed H2Joe, we wanted it to be easy to transport in one hand and have a natural feel. After several prototypes and designs we are finally ready to show the world how H2Joe can change your life,” Anthony added.

Reusable drink bottles have gained increasing popularity over the years as we vow to get healthy and reduce single-use cups and bottles. In fact, the reusable water bottle market is set to surpass $10 billion by 2024.

And while there are hundreds, if not thousands of reusable drink containers on the market, most can only hold one liquid at a time. The typical solutions are to carry two separate bottles, which creates an inconvenience given all the other items people carry around to throughout the day. Or to sacrifice one bottle over the other.

H2Joe comes equipped with a leak-proof seal to prevent liquids from spilling. Safety was a priority for the company so H2Joe is made with 304 food-grade stainless steel and BPA free polypropylene. Plus it has a sweat proof grip making it easier to transport beverages. It is also easy to clean by hand – the bottle easily comes apart into separate pieces – and dishwasher friendly.

According to the founders, designing a bottle that could both quench your thirst and satisfy a hankering for caffeine is not without challenges. There are many design elements that have to be considered including but not limited to the drinking experience, the convenience factor, temperature regulation, size, and of course the outer design. That’s probably why few have attempted to create a two-in-one drink container, and even fewer have been successful.

Another Chicago-based company, Golchi, designed a bottle with a similar function and ran campaigns on Kickstarter and Indiegogo in 2016. They were able to raise more than $800K USD overall but ultimately failed to deliver a reliable product. Despite its impressive fundraising, several disappointed backers claim the bottle did not deliver on its promises and many reported their bottle never even arrived.

H2Joe addresses many of the shortcomings of the Golchi design. For example, Golchi requires users to flip the bottle to drink each liquid, an issue H2Joe solves with its patent-pending SIPSWIG lid. 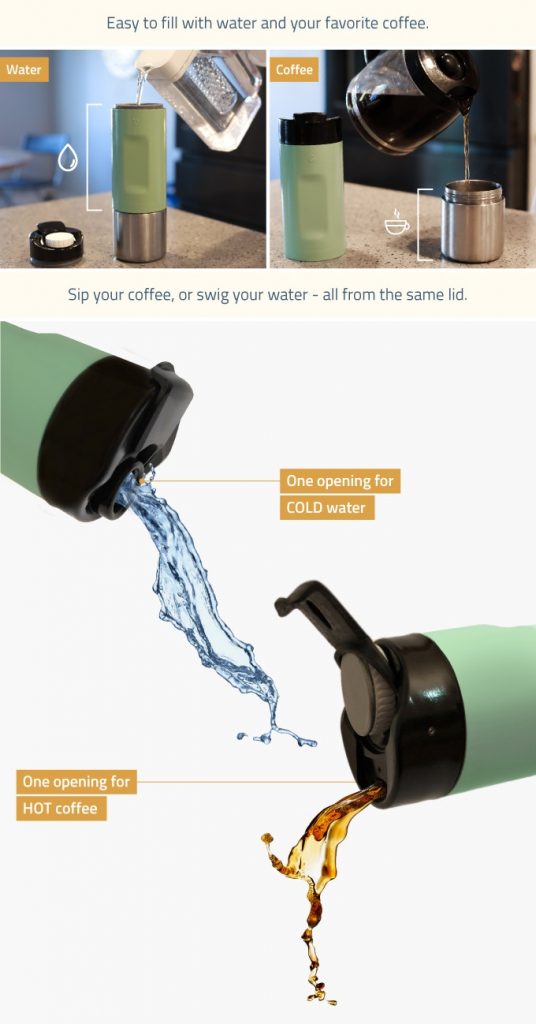 Both Moody and Anthony say they are as passionate about creating products that make day-to-day life easier for consumers as they are about a good cup of Joe. The two met in 2004 while working at Cosco Industries in Chicago. After several other ventures (including stints in Columbian Home Products, Hotspot Rentals and Robert Bosch), the duo came together once again to collaborate on a new project: H2Joe. Moody and Anthony have been in consumer products for more than 40 years combined, developing and bringing to market thousands of items with wholesale sales of over a billion dollars.

The bottle will retail for $59, which is not considerably more than popular single liquid bottles like S’Well and Hydro Flask. With H2Joe, coffee drinkers can instead opt for one easy-to-carry bottle to keep them energized through the day.

H2Joe is currently on Kickstarter for an early bird price of $34 and is expected to be delivered in October 2019. H2Joe will come in three colors including white, black, and mint.

5 tips to get the perfect Jewelry set