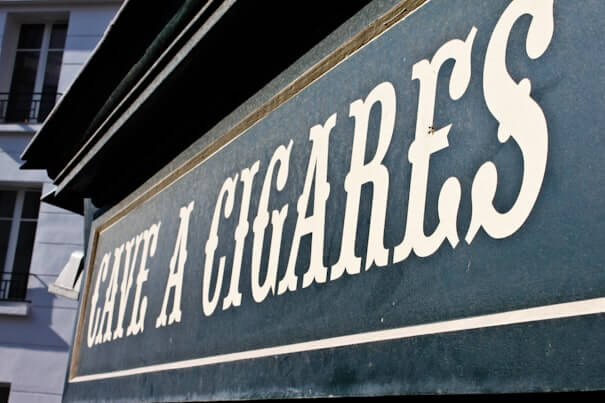 A couple months ago I started planning a week-long trip to Paris.  While most people would wonder “what sights am I going to see?”, my first thoughts were “what are the best cigar stores in Paris?” and “what are the best cigar bars in Paris?”   Paris: the city of lights, where 1/3 of people smoke and Cuban cigars are available on nearly every block.  After making plans and ultimately executing them, I thought I’d share my experiences in case you happen to be a) a cigar smoker, and b) in Paris.

Every couple blocks in Paris you will see Tabacs – stores which sell tobacco products.  While they all carry cigarettes, roughly half will have a small selection of cigars (mainly Cuban) as well.  And for those who claim that some shops are cheaper than others, the French government fixes all tobacco prices, so you’ll get the same price regardless of where you shop (you can find the list of French tobacco prices here).   To really  find selection, you’ll have to dig a bit deeper though.  Here are the 3 shops I found from research and visits to be the best in Paris, in order.

1) A La Civette
Arguably the most famous cigar shop in Paris, A La Civette is located in the heart of Paris, within a block of the collosal Louvre museum.  With a huge selection of cigars (300+), pipes, and accessories, A La Civette is definitely worth a visit from any cigar connoisseur.  While most of the accessories were high-end (and high-priced), there was a wide collection of cigars, about 70% Cuban, all located in a large walk-in humidor.  Included in the Cuban mix were Romeo y Julieta, Hoyo de Monterrey, Bolivar, Montecristo and more.   Especially notable was a sizeable collection of Habanos France Regional Editions (reviews forthcoming) and a handful of aged cigars. For non-Cubans, the store had the largest collection of Davidoff cigars I have ever seen, as well as plenty of others. All their cigars were very reasonably priced, and the service (while not English-speaking) was excellent.  157, rue Saint Honoré. +33 (0)1 42 96 04 99

2) Le Lotus
Another highly regarded choice for cigars in Paris is Le Lotus, which is in fact relatively close to A La Civette.  Despite its small size, Le Lotus is known for their excellent service and knowledgeable staff.  Whereas in A La Civette they would display 5-6 cigars of any one kind at a time, at Le Lotus entire boxes are displayed, which takes up a bit more shelf space, but makes for a nice effect.  While the overall selection is smaller than A La Civette, they maintain a good collection of aged and vintage sticks.  If you’re looking for non-Cubans, you’re probably best served elsewhere, as Le Lotus sells primarily Cubans. 4, rue de L’Arcade. +33 (0)1 42 65 35 36

3) Tabatiere-Odeon
While I didn’t have a chance to check this shop out, many people have recommended it online.  Falling somewhere between the above shops and the more standard Tabac, this store contains a large selection of reasonably priced cigars, and is located in a nice area of Paris.  128 boulevard Saint-Germaine. +33 (0)1 46 34 21 89

While there are other tabacs which carry cigars, the above shops have the largest selections.  However, you may find a few gems among the hundreds of Tabacs in Paris.  A few known to have a decent collection of cigars are as follows:

Smoking cigars outdoors in Paris is OK just about anywhere, but be sure to use common sense and ask the server/owner just in case.  If you prefer to escape the cold (and drain your wallet), Paris also has a fair selection cigar bars, including the famous Hemingway Bar at the Ritz.  On a rainy day, this list will be invaluable.