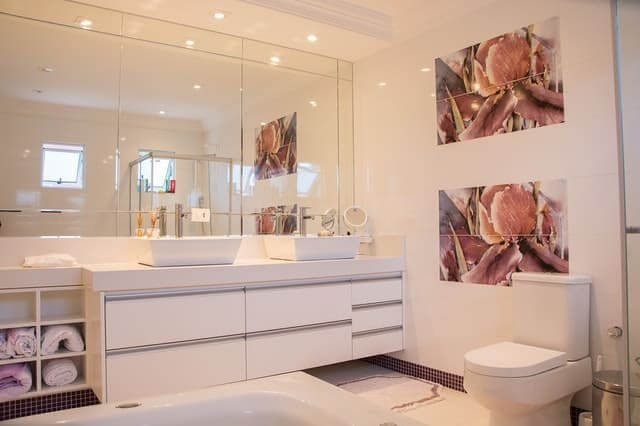 Out of all the areas in our homes, many of us value our bathrooms the most. While we certainly don’t spend as much time in them as we do in our bedrooms or kitchens, they nonetheless serve an important purpose that no one can live without. However, misconceptions about the cost attached to improving these essential areas oftentimes prevent us from doing so. Fortunately, they aren’t as pricey as some may believe. Here are a few inexpensive ways to upgrade your bathrooms.

Despite their rising popularity, it is surprising that many homes still lack proper shower enclosures with homeowners usually settling for cheaper and mediocre alternatives. This is false economy however since a wetroom shower screen is relatively inexpensive and good value for money compared to other options. Not only does it look aesthetically pleasing and elegant, but it will keep the bathroom nice and dry too.

You’ll rarely come across a bathroom without a vanity and top, and for good reasons: not only can they give the area a lift in terms of aesthetics, but they also serve a functional purpose in the form of additional storage. Best of all, there are plenty of options to choose from and you’ll be hard-pressed to find a design that doesn’t suit the overall design of your bathroom. They’re reasonably affordable as well and shouldn’t break the bank.

Moving clumsily in the dark while fumbling for the light switch is an annoyance that many of us have gone through when using the bathroom at night. The addition of an illuminated mirror remedies this issue as it allows us to see clearly without turning on the light or leaving it on. The added bonus is that it can lower energy usage which should decrease the electric bills.

We all need some measure of control whenever we bathe or take a shower. To this end, electric shower units exist. From regulating the pressure and temperature to making sure that it automatically shuts itself off just in case the water gets too hot, it is an inexpensive luxury that is sure to make the task much less tedious and far more efficient.

Replacing tiles or repainting the walls can often be tedious and costly projects that can very well go past the intended budget. Using wallpaper instead can minimize not just the cost of materials and labor, but the time it takes for its installation as well.

Upgrading a bathroom isn’t as pricey as some may think. All it takes is a reasonable budget and sometimes doing research on finding the right things at a price that you can afford. With the oversaturated market conditions and stiff competition between manufacturers, there’s no doubt that you’ll find bargains everywhere.