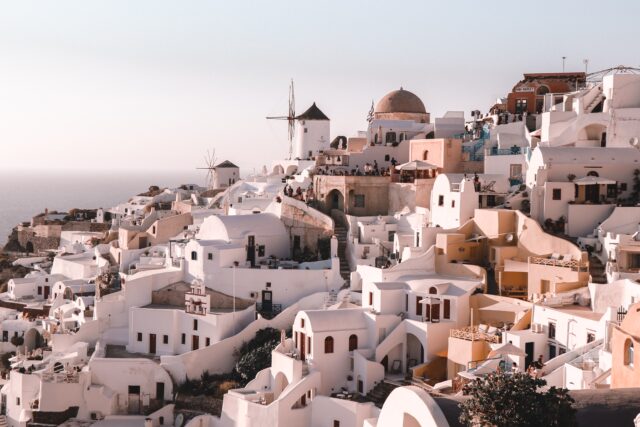 Unfortunately, you don’t have all the time in the world to visit them all. So which ones should be on the top of your list? And why?

Well, we made that list for you – featuring the best Greek islands to visit and the reasons that make each one special.

Santorini is not accidentally the first island on our list.

Santorini is one of the most popular holiday destinations in Greece and one of the most popular destinations worldwide. The island is world-famous for its unmatched natural beauty, romantic sunsets, and breathtaking view of the Aegean from every edge of the island. It is also well-known for its caldera, the huge volcano crater, the only inhabited caldera in the world!

Santorini is located on the southernmost part of the Cyclades. On the island, you will have the opportunity to enjoy delicious food and local recipes, swim in wonderful waters and get to experience a cosmopolitan life. You will also have the chance to walk in the picturesque Cycladic settlements, with their whitewashed houses and blue-domed churches, and witness yourself the breathtaking sunsets the island is known for.

Also, let us not forget about the beaches. Unlike the typical Greek beaches you have in mind, Santorini’sSantorini’s beaches are pretty unique as they were created by the volcano’s eruptions and thus are pretty different. Some of the must-visit beaches include Kamari beach, Red Beach, Perissa Beach, and Ammoudi bay.

Being one of the best Greek islands comes at a small price. The island is so popular that sometimes it gets a little too crowded. That’sThat’s why it’s highly recommended to rent a villa in Santorini, as a villa will offer you true privacy and luxury whenever you need it.

A celebrities’ favorite for its renowned nightlife and majestic beaches, Mykonos is also known as the “Ibiza of Greece.” In the graphic alleys of Mykonos, you will find numerous bars, clubs, rock-cafés, and live music venues. Astra, Cavo Paradiso, Babylon, and Skandinavian Bar & Club are among the hottest spots in town.

But there’s more to Mykonos than its nightlife. By day, you will have the privilege to visit some of the most wonderful beaches and swim in some of the most beautiful blue waters you’ve encountered. There is a beach for every taste. Elia is a beach with golden sand, Paraga is a great beach for those who like beach bars, and Agia Anna is the best choice for those who are looking for some relaxation and tranquility. Other notable beaches include Kalo Livadi, Psarrou, Ai Giannis, Kappari, Tourlos, Kalafatis, and Panormos.

If, in the end, if you find yourself staying in Mykonos, you may as well do it the right way – with luxury and style. If high-standard facilities, safety, comfort, and elegance are high on your list, then a Mykonos villa is the best option for your summer holidays. 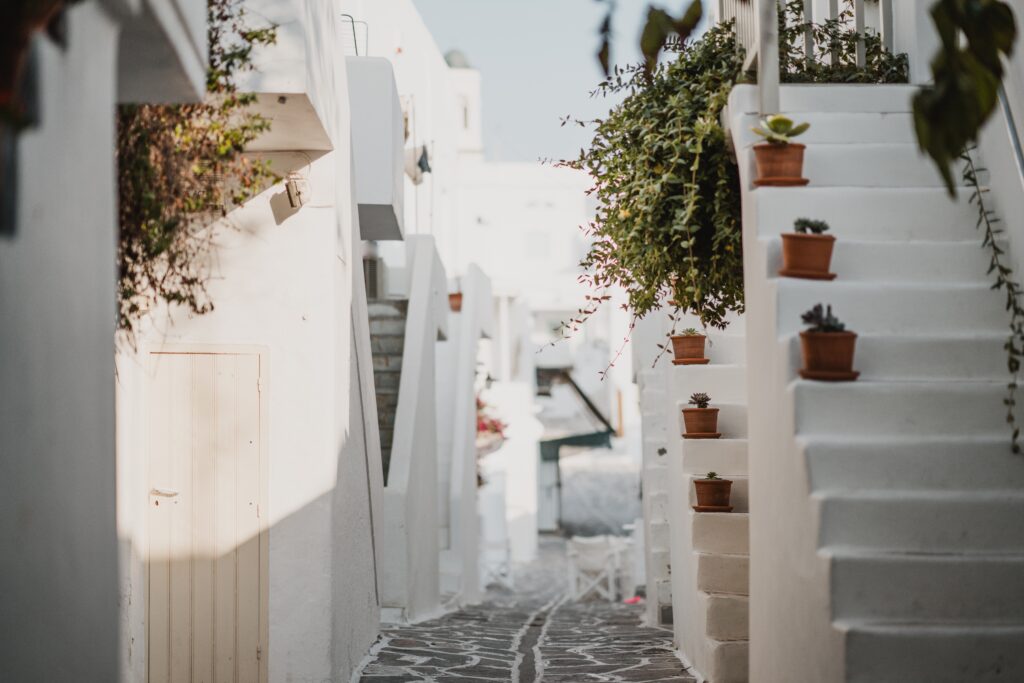 Paros is the third largest island in the Cyclades and is considered to be one of the best Greek islands. Since ancient times, it has been known for its white marble, which ensured its prosperity in Roman times. Paros combines many things in harmonious proportions: natural beauty, activities, authentic experiences, nightlife, gastronomy, archeological sites, and much more.

Paros has many beautiful beaches as well. Chrysi Akti is the largest beach on the island, with 1.5 km (1 mile). The beach has enough space for those looking to surf and those who just want to spend their day under the hot sun with a few swim breaks. If you are more of a party-goer, you should probably go straight to Punta Beach. For kite-surfers, there is Punta beach. And for those who prefer organized beaches, the west side of the island has the most such beaches: Parasporo, Agia Irini, Faraga, Lolantoni, and Voutakou.

Should you visit Paros, don’t forget to explore the exquisite gastronomic scene, stroll around Naoussa and Parikia, and visit the Byzantine museum and Archaeological Museum found in each town, respectively.

Along with Mykonos and Paros, Naxos is also one of the islands near Santorini – and one of the best Greek islands to visit. It’sIt’s also the biggest island of the Cyclades. Naxos is a pretty charming island, as it combines a history of centuries with unique sights, local tastes, well-hidden mountain villages, and spectacular landscapes.

“Portara” is one of these charms and the first thing every traveler sees when arriving by ferry. Impressive both in size and construction, Portara seems to stand in eternity and lead everywhere and nowhere. The door has divided scientists, researchers, archaeologists, and everyday visitors regarding its importance and role. Regardless, it will certainly enchant you.

When in Naxos, do take your time to taste the local cuisine. Naxos is well-known for its production of gruyere cheers, potatoes, and “gardoumia.”

Whether you are on vacation with your family and want a quiet environment or with friends and looking for an adventure, Skiathos is the right place for you. The rocky landscape and the steep beaches on the island’s north side make Skiathos an ideal island for all kinds of adventure lovers. For those looking for a romantic escape instead, the island has a lot to offer with its stunning panoramic view and charming places to enjoy a glass of wine or two.

Skiathos combines rare natural beauty with unique cultural monuments. It is covered by dense pine forests that go down to sea level, where the gold sandy beaches with turquoise waters are. During your strolls, you will encounter more than 50 Byzantine churches and monasteries – a testament to the island’s timeless spirituality and great history. Some of the most popular monuments you should visit are the castle in Bourtzi and the medieval castle of the old town.