Home Food & Wine What Would Happen If You Put the Moscow Mule in a Glass/...
Facebook
Twitter
Email 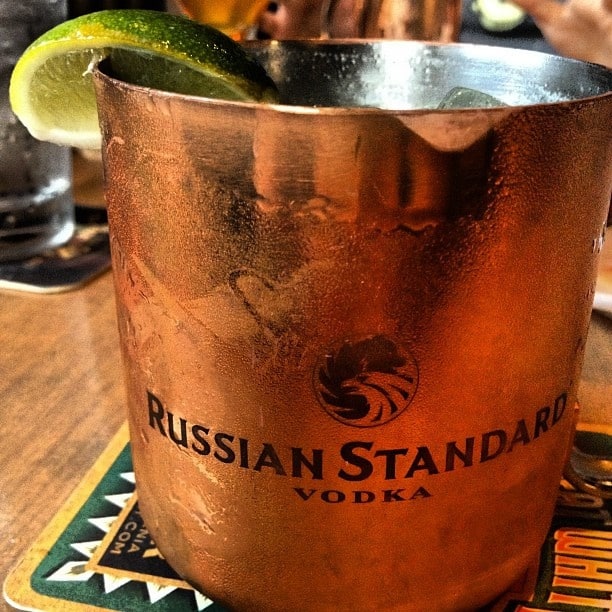 A fine cocktail is much more than the sum of its ingredients. Likewise, creating one is an art form requiring in-depth knowledge of mixology, an appreciation for detail, and a knack for presentation. If asked to describe your favorite bar, you’d likely begin by recalling their menu, then their ambiance, motif or style. The same goes for certain cocktails, like the Moscow Mule. Its flavorful mixture of spicy ginger, sweet lime, and cool vodka is just one part of what makes this cocktail special. The other is its signature copper mug. The vessel that delivered Moscow Mule into the American drinkery scene has withstood the test of time and is still considered the ideal presentation method decades later. For some traditionalists, merely questioning the necessity of the copper mug is blasphemous. But in the spirit of curiosity, we had to ask: what would happen if the Moscow Mule were served sans copper?

Temperature Aside from the happenstance history of the copper mug/Moscow Mule relationship, the copper mug is also useful for scientific reasons. Throughout history, many cultures have used copper mugs as their preferred beverage container because copper provides built-in temperature control. The copper also offers an added cool sensation as the metal takes on the icy temperature of the drink. This is particularly nice for warm summertime days as the metal is great for deflecting heat from the sun, ensuring your drink stays cool. By way of its handle, the mug also prevents your warm hands from warming the mug and its contents. If you were drinking a Moscow Mule from a glass, for example, you’d have a much harder time keeping the beverage chilled. 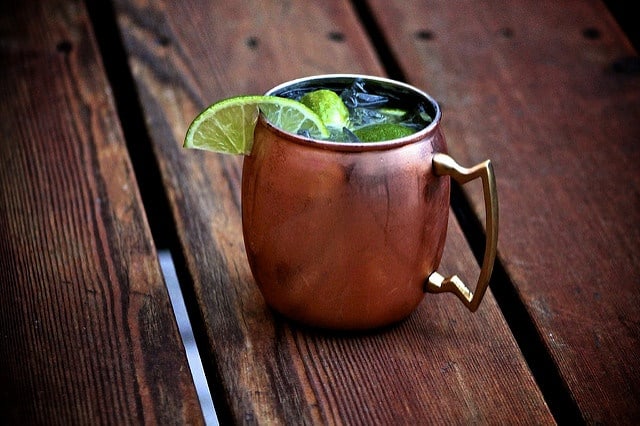 The copper mug also contributes to the taste of the drink, which of course would change if served in a silver, gold, or glass container. Some people are more sensitive to taste than others, so you may or may not necessarily notice the difference if you’re casually drinking. However, there are definite indications that the copper enhances the individual flavors of the ingredients. Scientifically speaking, some experts theorize this is because when the vodka touches the mug, the copper begins to oxidize, subtly boosting the aroma and enhancing the flavor of the vodka and lime. Cold copper, unlike glass, for example, also increases the amount of bubbles produced by the carbonated ginger beer, which enhances the drink’s fizz.

Science aside, the copper mug has withstood the decades because it lends the Moscow Mule a unique presentation style that adds to the cocktail’s charm and connects it with a strong tradition. James Bond wouldn’t look quite as classy drinking a martini from a hurricane glass, would he? The same goes for the Moscow Mule. Its originators in the 1940s gave the cocktail its signature mug to add to its distinguished character. They took photos of bar patrons drinking them and these photos went viral, mid-century style (think Instagram but with actual Polaroids and sharing them by hand rather than via the web). The mug has become synonymous with the beverage and both have made a huge comeback in the past few years as interest in fine mixology has increased.

So, are copper mugs really better? Would a Moscow Mule still be a Moscow Mule in a silver, gold, or glass container? Well, yes and yes. Copper does have certain properties other materials just can’t match in complementing this beverage, and though the drink would still technically be a Moscow Mule if served in another vessel, it just wouldn’t seem quite right. Share your thoughts on the Moscow Mule and its old-fashioned copper mugs in the comments below.