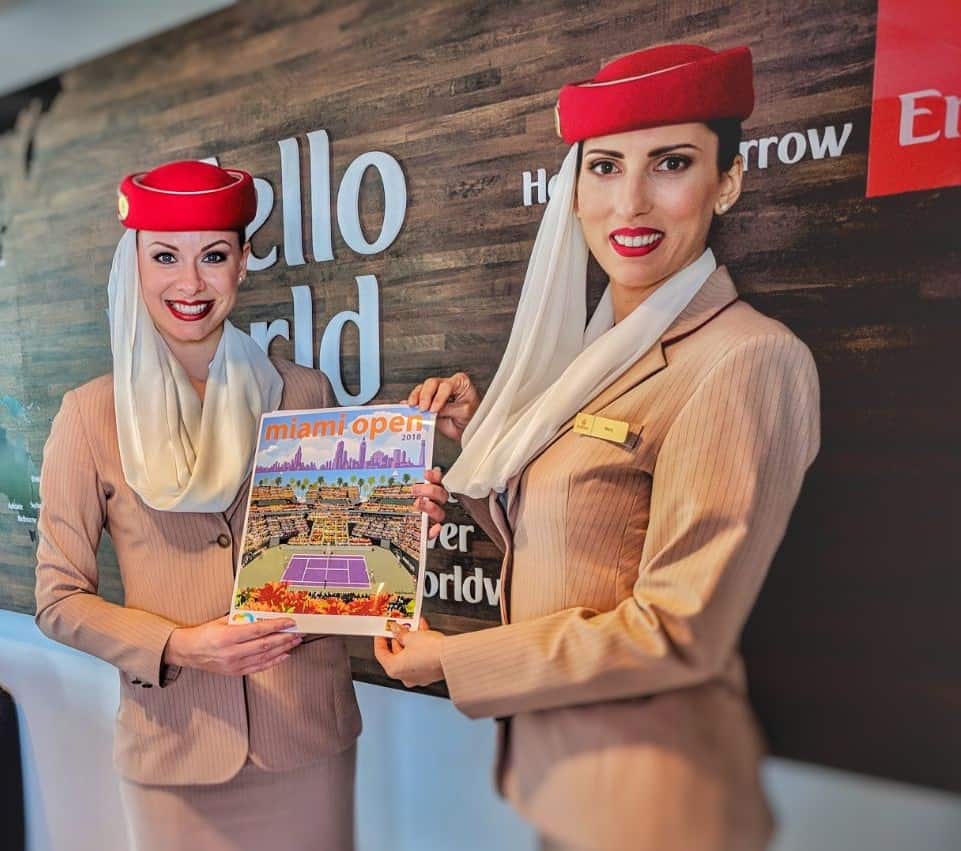 Adding to their already impressive portfolio of tennis sponsorships, Emirates Airline is a sponsor of the Miami Open. At session 7 From the Emirates hospitality suite at the 2018 Miami Open at Crandon Park Tennis Center I watched as the 47th ranked player Benoit Paire from France upset a former number one ranked player with 12 Grand Slam singles titles to his name.

It was a classic underdog story, with Paire’s David rising up to slay Djokovic’s Goliath.

A terrific afternoon of tennis at the #MiamiOpen. Djokovic is a gentleman without excuses. After his lousy match he told reporters, “I’m trying," “but it’s not working, and that’s all it is.” #FlyEmirates pic.twitter.com/08Wm3Nx6Af

I watched all of this sandwiched in between Emirates flight attendants from Hungary and Greece and a butler on call to refill my morning cups of Juan Valdez coffee before moving onto a glass of chardonnay all from the Emirates hospitality suite.

The hospitality suite was packed with local luminaries and scribes and a generous and delicious array of delicacies on display. Seared tuna and mini key lime pies kept us well fed throughout the day. As Novak Djokovic’s fate faded into the background we vowed to argue over whether Roger Federer or Milan Cilic will take home the $1,340,860 grand prize. As the match continued, a few of us took note of Emirates hospitality. This extends beyond the hospitality suite and applies to their flights as well. Treating guests well is a part of the United Arab Emirates culture. “Guests who come to your home should be made welcome, shown respect and be provided with whatever food and drink are available. One should sit with them in order to make them feel comfortable and happy, and take care to pay great attention to them.” – Al-Balagh Foundation

In fact, Emirates has been famously praised for its luxury flights that are truly next level.

By servicing South Florida regularly, Emirates has opened up the Persian Gulf to the world starting with Dubai. Dubai, the most populated city in the United Arab Emirates (UAE) is best known for its skyscrapers, artificial islands, lively nightlife scene, luxury shopping, ultramodern architecture, and a hub for business activity within the region. Emirates is responsible for opening the world to investors and tourists from the Middle East to take care of business and leisure and vice versa. It’s an important link that opens up opportunities for commerce, and Floridians are taking note.

Emirates sponsors many events on ATP and WTA Tours, including two of the four Grand Slams – the French Open and the US Open Series including the US Open itself, Emirates is also involved in the Dubai Tennis Championship, BNP Paribas Open, Barcelona Open, Internazionali BNL d’Italia (BNP) and Rogers Cup. And by the looks of it, there will be more sponsorships and more opportunities to come. Emirates hosted myself and a guest at the 2018 Miami Open. All opinion expressed are our own.

Fishing In Australia: A Guide To The Best Spots

Ways of finding your favorite hobby