This is a continuation of The Last Smoke — Part 2 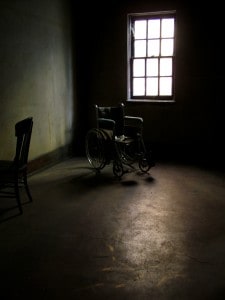 Marek leaned over the side of the bed where the voice had come and saw a polished black boot, like something a soldier would wear. He trailed his eyes up, crisp green army fatigues, an ammo belt, a beard – only one person looked that good in a beard. Fidel? Fidel Castro?

“Si, si,” Castro said. “ Now come my compadre. We don’t have much time.”  He reached for Marek, his fingers wrapping around the needle in Marek’s right arm. Marek stared with his dry mouth open and winced at the sharp pinch of the needle.

“Sorry Signor. But we have to remove these before we go.” Fidel than placed the intravenous tube off to the side and handed Marek his clothes that Marek had hidden earlier under the plastic mattress.

The needle leaving his arm felt real, and he could smell the man in front of him.

How is this possible, thought Marek. He got dressed automatically, staring at the man dressed in the crisp green army fatigues, complete with his trademark green cap and lit cigar, presumably a Cuban. My God that smells good, he thought. But how can it be him? El Comandante himself?

“Who are you really?” Marek stammered.

“Signor please,” Castro whispered. “A true revolutionary knows when it is time to act.” He guided Marek out of bed with a firm hand that smelled like the jungle and tobacco. “Your repression ends tonight, but only if you come with me now!”

Marek looked around to see if any of the other patients could hear or see what was happening in front of him. But everyone had taken their nightly doses and were deep in their prescribed sleep.

“Signor now!” barked Castro. “We have to leave!”

Marek straightened up. Dream, nightmare, or whatever it was, Marek didn’t like to be yelled at, especially by Fidel Castro.

“Can you just tell me how you got here?”  Marek asked.

Without looking or answering him Fidel directed Marek to the other side of the partially-open critical care door. Castro put a finger to his lip and spoke softly. “Listen, I do not want to be rude my friend. But right now it is too dangerous to talk.”

“Remember, a revolution is a struggle to the death between the future and the past.” Castro’s eyes glowed as he stared back at Marek. “If we are to achieve freedom for the people, and right now for you, we have to make sacrifices. Understand?”

Marek trusted him. He didn’t exactly know why. He knew it was impossible, and that he was probably in a dream or something else. And in a few minutes the angry nurse would shake him and force him to take a handful of her pills. But so what?  He just hoped this would last a bit longer. Besides, Fidel’s cigar smelled so damn good. Was it a Montecristo #2?

“Okay Signor, Castro said. “My job is to get you past this guard tower.”

“Si! Now do you have faith my friend?”

“Good. I have a perfect plan which means we will succeed.” Castro commanded.    “The time for your revolution starts now.”

“Thank-you. But why me?” Marek asked.

Fidel dropped to his knees, and motioned for Marek to do the same. Castro peaked at the nurses’ station around the corner. He glanced at his military-styled watch and checked the station again.

“Because I am like you. We both feel it is our duty to be disciplined.”

Marek nodded his head in agreement.

“To do our exercises, and to take maximum care of ourselves to the best of our abilities.” Castro continued.  “But this place is not working for you anymore.”    Castro checked his watch again.

“It is time to leave. Rapido!” Castro announced. He grabbed Marek’s arm, and they both ran towards the direction of the nurses, which was in the center of the hall.

All the pains and creaks were gone. Marek ran like he was in his 50’s again. I don’t know how I’m doing this, but thank-you body, thought Marek.

Just then, a loud slap snapped on the counter of the nurses’ station. Another man, also dressed in military fatigues, shouted at the nurses in a language that also sounded Spanish.

Without saying a word, Castro hustled his stunned, but agile, compadre Marek past the four nurses, whose eyes were all focused on the exotic handsome soldier wearing the beret.

Directly ahead, stood an elevator with its doors wide open and free of anyone, which was rare for this hospital. But before Marek could finish this thought, Castro spun him around and gripped his shoulders.

“Signor, remember, a man should not live beyond the age when that flame of his life has weakened.” Castro let go and directed Marek into the elevator and punched a button on the bottom row. “Now go. Someone is waiting for you my Polish friend.”

As the doors began to close, Castro grabbed one of Marek’s hands and shook it with a grip that reminded him of his father.

“Until we meet again my friend.”

And with that, Castro strode off towards the nurses’ station that seemed to be bathed in a brighter than usual white light.