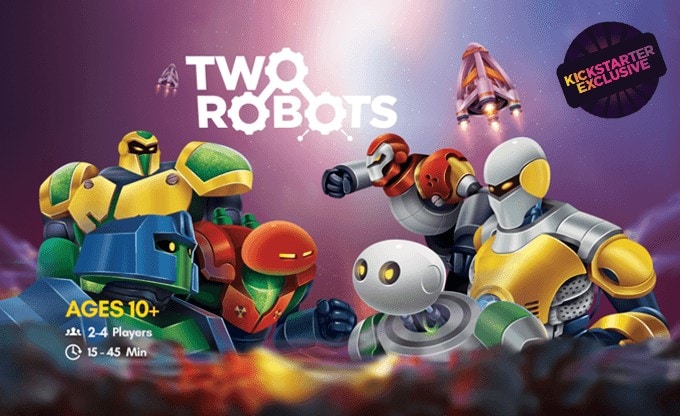 Games night is a no-brainer option for good times with family or your crew. But, to crank the fun up a notch and make gameplay more immersive, an epic storyline is required. Why is it that so few tabletop games provide this in a deep or meaningful way?

This was the question asked by two software engineers based in Austin, Texas before they decided to develop their first original game, driven by rich lore and character development.

Two Robots is a sci-fi tabletop game, which recently launched in an exclusive “Galaxy Edition” on the Kickstarter crowdfunding platform. Set in the year 2876 on the fictional and far away planet of Rennova. A group of survivors who are Earth’s most skilled population begin their new life in a post-war era. Scientists slowly use materials to create different kinds of robots who have various skill sets and capabilities for special tasks. But not all is peaceful. As the years go by, Rennovans are plagued by conflict, resistance and a struggle for peace.

According to Two Robots founders Omar Hafez and Aaron Dack, unlike most tabletop games on the market, part of their unique approach for players to enjoy the game is the extensive backstory.

“We have a fantastic worlds builder who has been developing a story that we hope will captivate and create a fun storyline for everyone playing,” said Hafez.

The lore is linked on their campaign page as a 32-page working document. It’s taking a cool direction so far, and it’s commendable that the creators are sharing such a transparent and iterative approach to their writing with their backers.

The document features informative facts about Rennova for astrology geeks, bios of the Hero Robot characters—The Guardian, The Peacemaker, The Scavenger, The Samurai and the Apocalypse—for D&D fans and larpers, detailed timeline for history buffs…you name it. It’s a recommended read if you want to get pumped up before the game and really grasp what’s at stake here (i.e. how and why you’re fighting to restore the planet Rennova back to its former glory).

How the Idea was Born

“The idea for Two Robots came to us during one of our weekly board game nights,” continued Hafez. “It was originally something we thought we would only play amongst ourselves but after a few rounds we saw the potential of it being a fun and entertaining tabletop game. We originally had built out a fully digital version of the game but nothing really beats playing in person, sharing snacks and a few drinks with a good game and in the company of friends.”

For people who enjoy fast-paced, strategic card games of set collection and player elimination, this might be the game for you. Unlike other games with hard-to-digest rules, Hafez and Dack designed Two Robots to appeal to a broad audience, be easy for kids ages 10-and-up to learn, and adults to enjoy. They market it as a mix of speed, strategy, bluffing, and a hint of luck, “designed to keep even the most experienced players on their toes.”

“Everyone on the Two Robots team is an avid board game player,” adds Dack. “We’re passionate about all kinds of games and we wanted this game to have different elements that would have players using strategy, but is quick enough to play so there’s always room for rematches. Our aim was to fill the intersection between a deep strategy game, and a fun party game that has high replayability.

2-4 players can join in on the action and gameplay takes anywhere from 15-45 minutes. This manageable time commitment should mitigate your cousin with the fiery temper, who has been known to flip the Risk board on more than one occasion.

Players are challenged to be the last standing in a barren dystopian landscape. They control “Salvagers,” robots with special abilities, attempting to build more robots with scrap robot parts than their friends. To win, players must either collect card sets and build two robots or be the first to eliminate all players through special event cards.

The Factory (play area) is where players put down their scrap robot parts. Players gather these parts and attempt to build stacks of correct parts to complete a robot. Players are able to use action cards which freeze, steal, and destroy their opponents’ parts to slow down other players’ progress.

Sound like something you can get into? Two Robots has a setup and overview tutorial available on their YouTube channel that shows how easy it is for first-timers to get up and running. Another playthrough video demonstrates all the phases of a turn (draw phase, play phase, event phase and cleanup).

Fanboys have the option to download the Official Rulebook to study up before the game ships. The founders claim that learning the rules takes only a few minutes, making it an easy game to jump into and play.

And, if you’re not geeking out enough, apparently the creators have written an original score to serve as a soundtrack to set the tone for gameplay. We can’t wait to give it a listen (am I the only one hoping it will be reminiscent of The Fifth Element)?

What’s in the box

At the time of writing, the campaign had surpassed, and more than tripled, their $5K fundraising goal.

If you choose to back the Kickstarter campaign, rewards start at $20 USD. The team is also offering discounts on two copies of the game, and other swag.

It’s hard to know for sure, but game development seems to be pretty much there. If all goes according to plan, the team’s timeline says backers will get their rewards in November 2019.

Kickstarter board games are insanely popular and everywhere (Kingdom Death: Monster 1.5 and Exploding Kittens are evidence of the viral potential of this project category). And while Two Robots hasn’t gone viral or raised millions, it’s important to remember that some of today’s epicly successful board games didn’t need much cash to get off the ground. Cards Against Humanity is a perfect example of this, having raised just $15K during its 2010 campaign. Can you imagine surviving the social awkwardness of parties without it today?

Two Robots is clearly a passion project. The backstory is creative and well thought out, and the concept art and final card designs are visually stunning. Combined, we think these guys may have the makings of a potential hit.

So, if you’re looking to escape the drudgery of your daily life and teleport to the year 2876 on a futuristic planet, Two Robots may be the game for you. Whether you’re playing with friends or family, reading and learning more about the Rennova universe with its expansive backstory will no doubt make playing the game even more captivating.