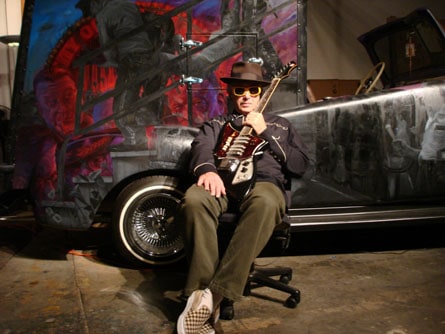 American guitarist Ry Cooder is a talented man who wears many musical hats. His recordings run the gambit from jazz to rock to world to Tex-Mex and probably even a few more categories that I’ve neglected to mention.

He is best known for his slide guitar work and has been referred to as a kind of “Messiah” because of his mastery of this particular type of guitar playing.

Ry Cooder is someone who is by his own admission, happier to record the music rather than be seen performing it. And for a good part of his career he has worked as a session musician, including a brief stint with the Rolling Stones back in the late 1960’s on their albums Let It Bleed and Sticky Fingers.

Cooder’s greatest strength however lies in his ability to re-interpret what I can only refer to as “authentic” music. In many ways Cooder is like this kind of musical archeologist who is constantly digging up and re-discovering forgotten categories of music.

Some of that range includes 1930’s hobo tunes, American civil war hymns, and gospel protest songs, all of which when taken as a whole forms this rich musical tapestry; a sonic landscape of sorts that Ry Cooder inhibits and freely moves about in.

As a musician he has this innate ability to record these distinct styles of music and transform them into his own, but he manages to do this while still retaining the genre’s own particular honesty about it.

He is also a musician who understands the importance of balance, and has a talent for not letting technology get in the way of the music itself. His music feels and sounds organic, authentic, and not over-produced. You get a sense of musicianship and of intimacy that is missing in so much of the over-produced music that is popular these days.

Ry Cooder has also had great success in scoring several iconic film soundtracks, the most famous being for German director Wim Wenders and his film Paris, Texas from 1984. His slide guitar work on the album is haunting, evocative and immediately immerses one in the world of the American Southwest; its crumbling canyons and its messed up, mysterious masculinity.

Cooder has also worked extensively with the American film director, Walter Hill, a filmmaker known for his love of westerns and for exploring the rugged side of the male myth. The soundtracks for The Long Riders, Southern Comfort and Crossroads are all fine examples of this brilliant collaboration.

Ry Cooder was also the producer for the absurdly successful Buena Vista Social Club album and it speaks to the kind of man that he is that his role as a producer is probably one of the few things not so widely known about this album. His job was to let the musicians themselves shine, and it was a task that he did admirably while at the same time producing an incredible album.

Cooder continues to record and his output continues to be eclectic. In 2007 he released, My Name Is Buddy, a concept album that asks the listener to undertake a “Journey through time and space in days of labor, big bosses, farm failures, strikes, company copes, sundown towns, hobos, and train..the America of yesteryear.”

It’s an album, that to me at least, speaks to the dying tradition of the “working man” and the pride that went with that title. It’s a collection of new and old songs that somehow blend just perfectly together under the guidance of their guitar master – Ry Cooder.