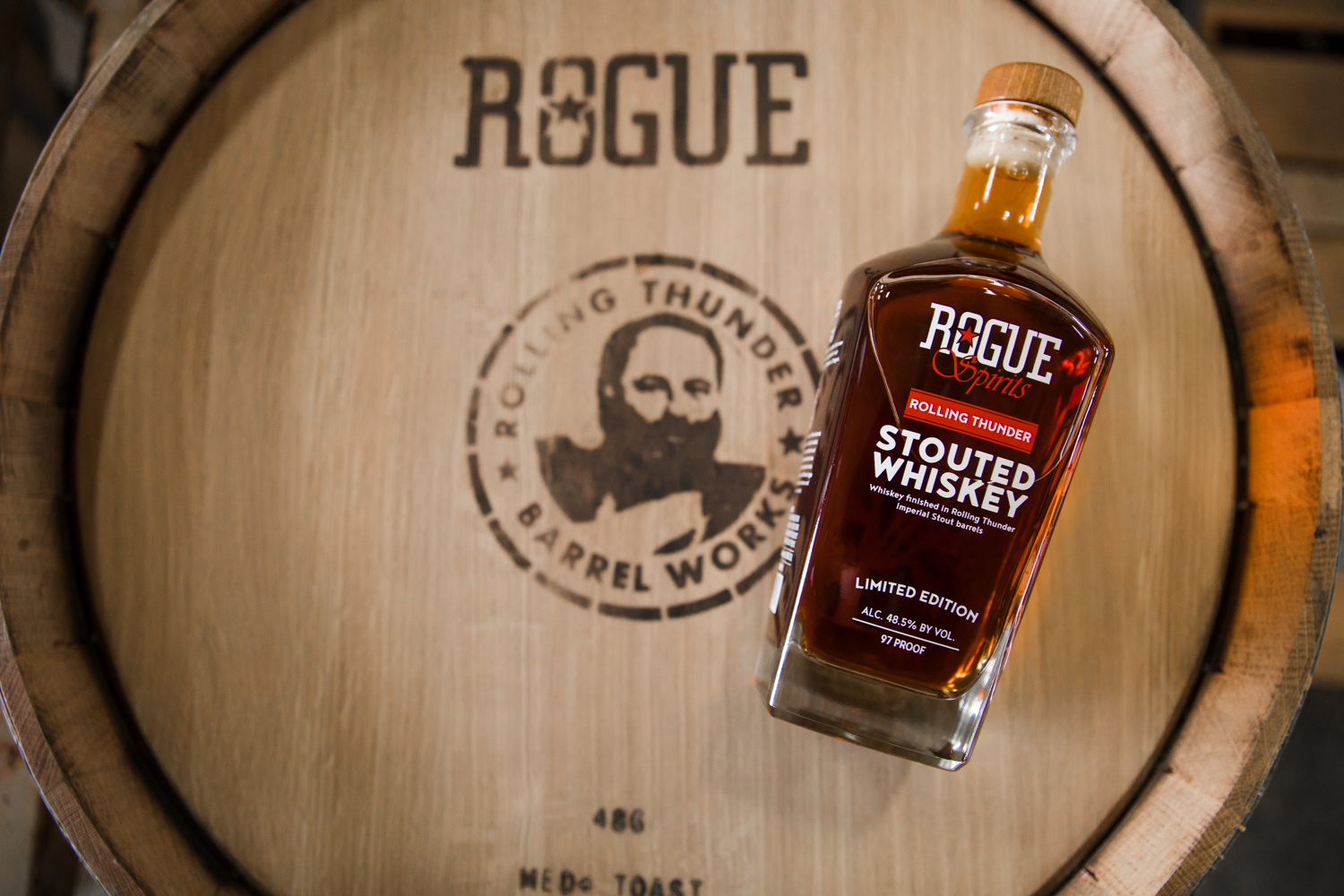 According to some, the first distillations of modern whiskey happened in the early 13th century (that is almost 800 years ago!). This distillation took place in arguably Scotland and Ireland. I had the chance myself to visit Scotland in 2018 and experience a tour of one of Scotland’s great distilleries. There I had learned of the many flavors in which whiskey can be brewed, and of course, I had the luxury of tasting all of the different flavors the country had to offer. Fast forward a year later, I was given the opportunity to taste whiskey from Rogue Spirits. Even though whiskey was first distilled almost 800 years ago, Rogue has been fine-tuning their process over the past 16 years. I tasted four different blends; Rolling Thunder, Dead Guy Whiskey, Oregon Single Malt Whiskey, and Oregon Rye malt Whiskey. The flavors were bold, crisp, and a definite addition to any holiday gathering.

I decided to start my tasting journey backward. I began sipping Rolling Thunder; a “culmination of all things ‘Do It Yourself’” is how Rogue describes it. This blend is a 3-year aged American Single Malt and is created in Oregon Oak barrels. It has the spice and citrus undertones from the Oregon Oak and yet, a bold taste from the Stout as well. It is hard to detect the citrus from the first sip; however, once it sat on my tongue for a while after the citrus notes began to peak out. I decided to pour this one over ice. I even paired it with a sharp white cheddar cheese after sipping, and the flavor of the cheese became out of this world! I would recommend 10/10, trying that pair. Through more sips, it became obvious that this whiskey was not aged in a normal whiskey barrel, and even had somewhat of a campfire feel to it.

Continuing in that same order, I poured a shot glass full of the Dead Guy Whiskey. This one is said to have hints of dark cocoa, coffee, and caramel. Upon first sip, it is hard to tell which flavor is coming through, but the coffee begins to present itself immediately. I truly think that this would be a good whiskey if you wanted to spike your coffee a little. As it already has those notes of dark cocoa and coffee, it would add to your coffee flavor of choice! The hints of caramel are undetectable to me and a few others who sampled, but that does not rule this blend out entirely. It is still a great choice and would be the obvious choice for that holiday get together mentioned earlier.

Next up is the Oregon Single Malt Whiskey, a blend that is said to take you back to the origins of Rogue’s home along the Yaquina Bay. It has notes of smoke and briny sea air, two things in which Oregon can be described for. It is smoked with apple and alder and aged for a minimum of 5 years. I’m not going to lie when I wafted this blend; my immediate thoughts were “apple juice.” I think Rogue did a pretty good job of hinting at those apple beginnings. This blend is less bold than the other two that I have tasted so far, but it gives a refreshing crisp finish. I don’t sense the smoke as I did with the Rolling Thunder. But, this blend is definitely soft on the palette. It would be good over ice and sipping away on a nice day. The more and more I let it sit, it begins to feel as if I really have consumed apple juice.

Last but not least, Oregon Rye Malt Whiskey, a whiskey that builds in flavor. It is said to have an easy sipping experience, which in comparison to the last I am interested to see. This blend is also hinted with caramel once again along with a citrus feel that leads to cinnamon, nutmeg, and black pepper. Interesting. I poured myself another shot, and the black pepper was bold in smell! I feel that this one won’t be for the faint of heart. The first sip hits you, but after letting it pass through all taste buds, it gives that soft spice flavor. The black pepper is not overwhelming in the slightest, and the warmth of the cinnamon and nutmeg take over. Once again, I do not taste the caramel, but I also do not taste the citrus. Without it, though, the blend would probably taste a bit different.
Overall, Rogue gave me a good experience with the variety of whiskeys that they have to offer. The American-made whiskey has truly gone through the perfection process as they release this years’ winter collection. These really would make a great holiday gift, and if you don’t want to gift them, they certainly would be well shared on a nice wintry day.