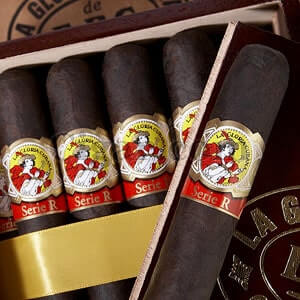 I’m a little late to post this up, but the offer is valid until May 15.  In a nutshell, buy a box of La Gloria Cubana Serie R cigars from one of a list of pre-specified online cigar shops, and be entered to win a trip to a performance driving school in Las Vegas, and potentially a Lotus Elise.  Press release below:

Richmond, VA—Serie R cigars invites its loyal legion of fans to celebrate their enjoyment of strength, refinement and performance through an exciting sweepstakes culminating in the giveaway in Las Vegas of a 2010 Lotus Elise sports car valued at more than $52,000.

Consumers of legal smoking age who make an online box purchase of Serie R cigars from Best Cigar Prices; Holt’s Cigar Company; JR Cigars; Mike’s Cigars, or Thompson Cigars between now and May 15, 2010 are automatically entered into a drawing to win a trip to the Serie R Performance Driving School which will be held on 9/17 to 9/19, 2010 in Las Vegas. No purchase necessary. For complete official rules, visit www.cigarworld/lotus.

A total of five first-prize winners will win a three-day, two-night stay in Sin City, round-trip airfare and professional driving instructions at the Serie R Performance Driving School time track. There, each first prize winner will be given an ignition key to start the Lotus. The person whose key starts the engine will win the grand prize Lotus Elise and return from Vegas as a big winner.

According to Debo Mukherjee, vice president of marketing for General Cigar, parent company of Serie R, “To spotlight Serie R’s artistry, exquisite construction and iconic status, we have aligned the brand with Lotus, a luxury automobile whose attributes mirror those of our critically-acclaimed cigar brand. When you factor in an extended weekend in Vegas, luxury accommodations and driving instructions, we are confident this promotion will fuel great excitement among premium cigar enthusiasts.”

Renowned for beefy ring gauges and a full-flavored taste profile, La Gloria Cubana Serie R is one of the hottest-selling cigar brands on the market today. A collection of seven cigars, Serie R boasts an amazing spiciness and powerful, refined taste, making this collection a favorite among today’s tenured smokers who demand the ultimate in flavor.