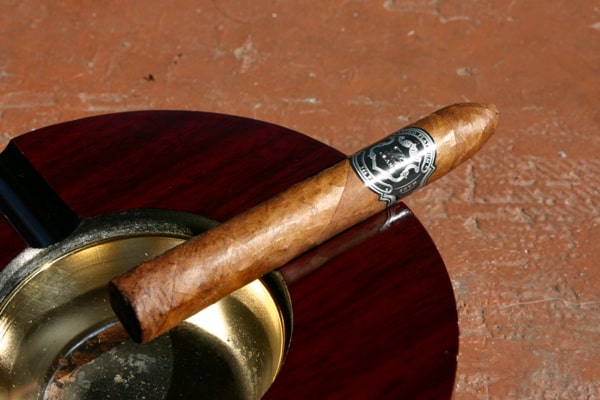 Zino is a relative newcomer to the cigar industry, and is marketed towards the more urban lifestyle and younger generations.  Their image is that of the young aficionado who enjoys the high life but still has their finger on the pulse of what the current trends are, mixing style and flash into the mix as well.  They’re known for a quality product with modern packaging that speaks to younger cigar smokers, and they do it quite well.  Along with that, they’re known for a flavorful cigar and have a loyal fan base that enjoys their cigars.

The problem that I’ve had with Zino is their prices, which tend to be high.  However, the Z-Class line provides a solution to that with a more mid priced line while still holding onto the quality and flavor that many Zino enthusiasts enjoy.  The line uses Dominican wrappers, a Peruvian binder, and a blend of Nicaraguan, Honduran, and Dominican fillers.  Overall it promises to be a good flavorful blend with medium to full bodied flavors.  The vitola I’ve been given is the 546P, a pyramid shaped cigar measuring in at 5 5/8×43.

The wrapper is a dark brown wrapper, the color of stained cherry wood or bittersweet chocolate.  It has mild veining and tooth that isn’t very noticeable against the dark tobacco leaf.  The wrapper is oily enough that I can see parts where it’s soaked into the leaf.  Overall it has a bit of a rough appearance that is quite different from the Platinum series cigar I reviewed before.  It doesn’t have the silken smooth wrapper or the regal looking band.  However, it still looks quite attractive aesthetically, and looks like a diamond in the rough.  Squeezing gently as I hold it makes the cigar give a little, but it doesn’t look as though it’s lacking in tobacco.  The scent is strongly of cedar and chocolate, with some earth mixed in.  Overall it looks and smells good.

Toasting the foot took a little longer to get even, despite its small size.  Cutting the cap was very simple and easy with no tearing or cracking.  I take a smooth easy puff and am greeted with bold red and black pepper, wood, sweet spices, and a hint of scotch.  I’m surprised by the boldness of the flavors and how they came together.  It’s a huge difference in how the flavors were in the Platinum Chubby I had smoked before with no clashing or off putting mixes.

As the cigar progresses the flavors settle out into a nice progression of sharp peppery spices that transitions to a bold core of wood and sweet spices.  It finishes with red pepper again with a brief note of scotch.  Underlying all these flavors is a nice sweetness, with a little earth mixed in as well.  About a third into the cigar I pick up notes of nutmeg that mixes with the woody core and stays to until I put the cigar down.  Overall it’s a nice blend of flavors that I enjoyed, significantly more than I did with the Platinum series.

There are only two things that I dislike about this cigar: the burn and price.  The cigar was finicky with staying lit and holding an even burn more than a couple times.  It tended to tunnel on me and I wouldn’t notice until it ashed.  This, however, can likely be fixed easily with some time in a drybox to help dry out the outer leaves.  Price, however, is something that you’ll have to be on the hunt for.  This particular vitola can be found for $8.80 per cigar, and that really isn’t all too high for a Zino.  However, for that price I can just as easily buy another good cigar as well.  For me it’s still a high price for what you get, but that doesn’t make it any less of a tasty cigar.  If you enjoy Zino already, then you’ll enjoy this one as well.  It’s also a reasonably priced Zino cigar to try out and see if you enjoy their lines.

Again, special thanks to Eddie Atalla and Tobacco Country USA for providing this cigar to review.  If you’re in Jacksonville, NC, then I suggest stopping by one of his shops.