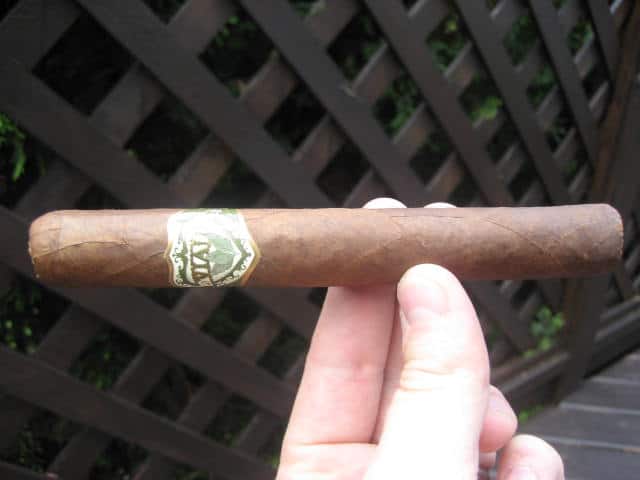 One of the most attractive cigars I’ve smoked this year is the Viaje Oro (the j is pronounced like an h).  Viaje is a smaller company focusing on making quality hand made Nicaraguan puros, the Oro being the fullest bodied smoke in their line-up. Holding this cigar in your hand and smelling the wrapper is a real pleasure, with a seemingly veinless, lumpless, chocolate scented cigar promising an interesting smoke. Also, the Viaje band is one of the most thoughtfully designed that I’ve come across.

After slicing off the cap with my Palio, the draw was a bit looser than I would have preferred. Sometimes with a larger cigar like this I worry that if the cigar smokes too fast and draws too easy it will be scarred by the head rush it gives.

As it turned out, this Viaje never threw excessive volumes of smoke, in fact it was quite conservative in its attack. It still had plenty of flavour, just never in thick oily quantities.  Those flavours were very typical, caressing the palate with well balanced earth and espresso that grew in intensity throughout the smoke until a slight creaminess at the end. The aroma had a floral edge not dissimilar from a Romeo cuban I smoked recently. There were a few burn issues that had to be fixed manually that you can see in the picture here.The ash itself was as dark as I’ve ever seen in a cigar with only slight white

accents.  Thanks to Texcigars for allowing us to try one of these pleasant smokes.  I would recommend a Viaje Oro to someone looking for a a cigar with textbook Nicaraguan flavours that isn’t too heavy. The thought occurred to me a few times that this cigar, with its band and lighter profile, may find an audience with women smokers. Check out this review at Her Humidor, and further reviews at Nice Tight Ash ,Stogie Life and Cigar Smoker’s Journal.