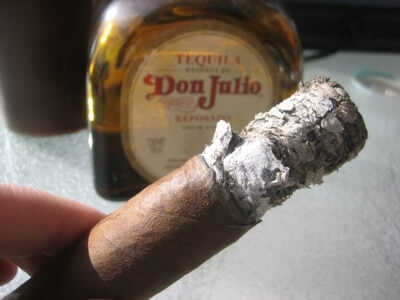 How much do cigars vary from one size to the next?  How about between the same cigar with a different wrapper? While I’ve experienced these situations myself, it was usually on different days, accompanied by different foods and moods, and hence a clear comparison wasn’t possible.  To address this, a few friends and I decided it was time to get deeper into this issue, and have a herf devoted to one type of cigar – the Taboo Limited Reserve.  There were 3 of us smoking, selecting a Maduro Toro, Havana Toro, and Havana Torpedo respectively.  The Maduro Toro and Havana Toro differ solely in their wrapper, and the Havana Toro and Havana Torpedo differ only in size.  So, how do they compare?

Taboo cigars are the house blend of a Texan cigar shop, and have received much attention in the online cigar community.  They make a wide range of cigars, including these, the Limited Reserve series.  Coming in 3 wrapper types (Connecticut, Havana, and Maduro) and various sizes, these cigars are in some of their final runs at Taboo, and so may be a little tough to find.  All cigars were paired with espresso for the first half, and Don Julio Reposado in the second half.

At first appearance the LR Maduro has a dark, matte wrapper and a rich chocolaty smell.  The construction is quite consistent, with no soft spots.  After the initial light there is a bit of an acidic taste, but that could likely be due to imperfect lighting.  Despite this initial taste, I am overwhelmed with immense volumes of smoke — likely the most smoke from a cigar that I’ve experienced in some time.  After the first couple minutes, the acidity died down, and the cigar took on earthy, nutty tones that only grew more intense until the end of the cigar, where it became very peppery.  Burn was fairly good, requiring 1 or 2 small corrections over the cigar’s 80 minute burn.  Given we were outside in the wind, I wouldn’t hold this against it though.  While the salt and pepper ash held quite long (1.5 inches), it wasn’t very tight, making a mess wherever it fell.  As the cigar finished, it became quite bold, with strong grassy flavours and a rich creaminess.  Throughout it’s burn, the cigar pulled perfectly, providing consistent smoke levels.  All in all a very tasty cigar, starting off medium and finishing off strong.

Compared to the Maduro, this cigar had a milder, sweeter, and earthier aroma.  After the initial light, there was no pronounced acidity as with the Maduro, and flavours of pepper and tea tannin dominated.  A vein running through the cigar’s wrapper led to burn issues for the first third of the cigar.  Nothing a few corrections couldn’t handle though.  After the vein and the first third, the cigar became much sweeter. Again, at the two thirds mark, another hard to burn spot appeared. At times, this cigar had some very pleasant, rich tobacco character but in the bad spots it was very hard to pull. All part of the adventure with a cigar this size.

Compared to the Havana Toro, this Torpedo had very similar aromas, if a bit milder.  Like the Maduro Toro, there was unpleasant acidity when first lit which quickly subsided.  Cocoa and coffee flavours were more dominant than in the other cigars, and smoke volume was considerably less. The wrapper also had a more distinctly sweet aroma than the Toros — a quality which persisted throughout the cigar. Largely due to the change in form factor, the pull was considerably harder, only loosening up after cutting off a large portion of the torpedo cap.

All in all, we really enjoyed these cigars, largely because they gave us an excuse to get together and smoke some cigars, but also because of the cigars’ inherent merits.  On a side note, we figured out how to make an ashtray from a soda can (see pic).  Besides a few burn and pull issues, these cigars were quite tasty, becoming a bit strong and harsh near the end.  The Torpedo was a scaled down version of the Toro, producing milder flavors and reduced smoke.  The Maduro Toro came in as the strongest, with billowing smoke and widely varying flavors over the cigar’s duration.  These cigars are definitely worth a try; keep your eye out for the upcoming (updated) version of these in the near future.

Also, if you’ve made it this far, we’re giving away some free Taboo cigars just for signing up for our Facebook page. Go there now.