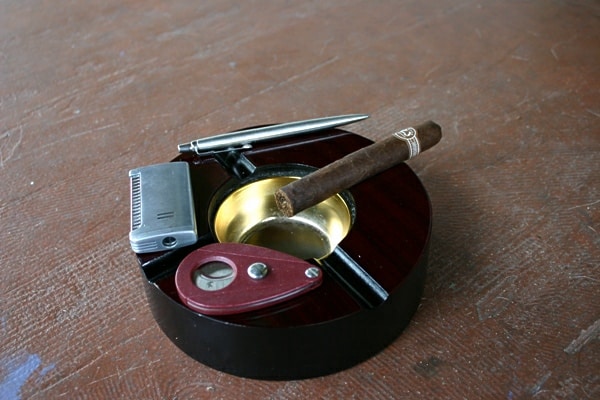 Padron… well, what more can I say after my last review on their 1964 Anniversary line?  They’re famous for their delicious flavor, outstanding quality, and unparalleled consistency.  They’ve regularly rated as good as or better than any Cuban made cigar, and many prefer them over Cubans.  Blasphemy, I know, but it’s the truth.  I’ve had a handful of Montecristo #2s and Romeo y Julietas that were Cuban made, and they were indeed excellent.  However, they varied in consistency depending on the year that crop of tobacco was grown, and I have yet to have that happen with any Padron cigar I’ve smoked.  Today I’m going to go over a less expensive Padron that is easier on the wallet and good for an every day smoke.  It’s a cigar that I bought boxes of as a college student looking to squeeze as much as I could out of every dollar I had, while still being able to enjoy a quality cigar.

I’ve picked out a Padron Delicias maduro, a carona sized cigar measuring in at 4 7/8 x 46.  It’s a Nicaraguan puro, something Padron does with all its cigars, meaning that it uses tobacco entirely from Nicaragua.  The wrapper itself is, well, rather ugly.  It’s a deep brown leaf with noticeable veins, bumps all along it, and teeth.  It looks well beyond rough and rugged and leans more towards looking like a grizzled fighter.  If you didn’t notice the simple Padron band around it, you’d question whether or not this was from the same maker as the Anniversary series.  That being said, why would I bother buying a box of cigars that look this ugly?  Because looks are most definitely not everything.  When you get past its appearance you’ll notice how solidly rolled these cigars are.  The leaves are firmly packed and held together with a nice thick binder and wrapper.  There aren’t any soft spots, and though there may be a few aesthetic flaws, it doesn’t take away from the construction.

I get past looking over the cigar and finally begin to torch the foot.  It lights up very easily with a single flame torch, smoldering to a nice red at the tip.  I cut the cap, getting a nice amount of resistance at the blades, and blow on the foot again to keep it glowing.  I take a puff and am greeted with a mix of spices, dark rich coffee, and bittersweet chocolate.  After half an inch the flavors develop more, and start to settle out.  The spices have a nice tingling mix of red and black pepper that ignites the palate, mixed with something that’s familiar in my family’s cooking, but I can’t place my finger on precisely.  I’ve read and heard others describe it as saffron; I just know it’s enjoyable and pleasant.  The spice mix that makes the core flavors becomes increasingly more full bodied and dominant as the cigar progresses, becoming a nice little firecracker by the time I finish.  The coffee flavor is very strong, reminding me of the coffee I had enjoyed when I visited France years ago.  That memory was further fleshed out and cemented when the dark cocoa flavor mixed with the coffee notes.  It was just like sitting down after dinner and being served a small cup of extremely dark roast coffee, where the bean is almost midnight black.  There would always be two small pieces of dark chocolate served with the coffee that I would break apart and mix in with the drink, adding that cocoa flavor to the earthy and nutty notes of the coffee.

The core flavors dominated during the first half of the cigar.  The spiciness would make for a long whole note, punctuated by a quarter-note for the coffee/cocoa flavors that made up the finish.  As the cigar progressed, the core flavors would sound for a shorter and shorter note, while the finish would last longer and longer.  By the time I put my cigar down, the core flavors that once dominated were a brief quarter-note followed by a long note for a short but strong and robust finish.  It’s interesting to see how the different parts slowly traded intensity and intensity over time.  I found that to be an interest aspect of the cigar, and something that held my interest.

For value these cigars are extremely difficult to beat.  For that matter, any Padron you buy is difficult to beat for value.  I can find these cigars online being sold for approximately $88 for a bundle of 26, or roughly $3.38 per cigar.  For that amount of money you get a cigar with excellent flavors that kept me interested, a cool and even burn, and approximately 1 hour and 20 minutes of enjoyment.  For those still on the fence about whether or not these are worthwhile cigars, let me relate it in terms of cars.  Let’s say Padrons are the BMW of cigars.  I would then equate the Delicias to the 3 series of BMW, an entry level selection to a quality product.  That doesn’t mean it’s a lesser product though, as it still has excellent flavors, solid construction, and a slow and even burn the entire way through.  All in all I think the Padron Delicias is a solid smoke that’s easy to afford as a daily smoke.  I’ve bought boxes of these without any regret, letting one settle and rest for a couple months while I smoked from one I’ve bought earlier.  I’ve given these to friends and company, and they’ve all enjoyed them as well.  With all that said, I think it’s time you gave them a try as well.