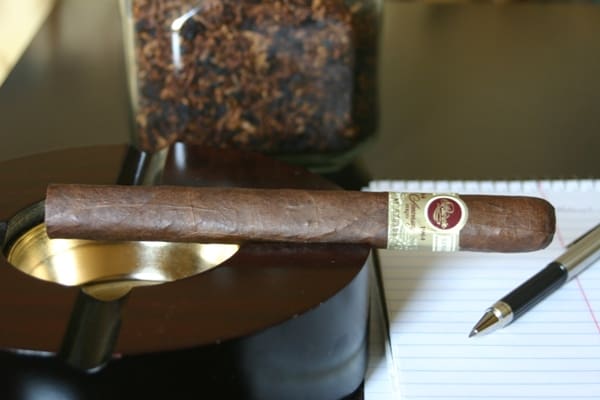 Padron.  If you smoke cigars and have spoken to your local tobacconist, or browsed cigar forums, then you’ll have heard and read glowing things about this maker.  Padron is another relatively new maker, founded by Jose Padron in 1964 in Miami, Florida.  He would later move his factory to Nicaragua where political unrest would force him to relocate to Honduras, and finally back to Nicaragua where he’d settle in Esteli.  Over the years Jose, and later on his son Jorge, would develop a reputation of excellence in all their lines.  The 1964 Anniversary series was first introduced in 1994 to commemorate their 30th anniversary of making cigars.  It has since been one of their most highly acclaimed lines, consistently ranking at the top of every cigar list, and being well sought after.  It’s in such demand that Padron uses a double band: one to show it’s a Padron cigar, and a second bearing an individual serial number for each cigar.  This particular vitola is the Diplomatico, a Churchill sized cigar measuring 50×7, and made entirely of Nicaraguan tobacco that has been aged for 4 years.  These cigars are offered in a natural or maduro wrapper, and this one is a natural.

The wrapper is a nice chocolate brown with a light oily sheen to it.  It isn’t oily like the La Flor Dominicana cigars I’ve smoked, but it has a nice slight glow to it in the sunlight.  The wrapper is mildly veined, with the moderately dark leaf accenting the veins.  A closer look shows some tooth on the wrapper, though slight, and looks like it would be on the rougher side.  The somewhat rugged look that all Padron cigars have is thrown aside when you pick it up, however.  The texture is like a ribbon of silk: soft and smooth, pleasing to the touch.  It hints that this is a more refined cigar, beyond the classic lines Padron makes, which are quite good as well.  What’s more is the very nice box press to the cigar that gives it a classic Cuban look and feel.  All and all it’s a very attractive cigar that has a nice duality to it.  It looks regal and rugged at the same time, and is crowned with a lovely band that compliments the overall look.  The scent of the cigar is as lovely as its appearance.  It smells like a rich milk chocolate that is sweet and makes my mouth water.  It’s like I’ve walked into a Lindt chocolate store and I’m standing next to a display of truffles.  Fantastic.

I finally start to toast the foot of the cigar with three matches, taking my time to get the leaves toasted and being careful not to simply char them into a blaze.  Patience is rewarded with an evenly lit cigar that’s ready to be smoked after clipping the cap with a double guillotine cutter.  The first few puffs are a bit of a puzzle: it’s not that there’s no flavor in the cigar, but that there is so much flavor to it.  It isn’t overwhelming, it’s just such a complex mix that you have to pause and appreciate it for the first few puffs.  I immediately get notes of oak, cocoa like baker’s chocolate, an earthy sweetness, espresso, cream, toast, and spice.  From then it’s a matter of which flavors make the core and which flavors accent it.  At the first inch the core flavors I pick up are a warm toasty oak and cocoa, with the earthy sweetness complimenting it and the espresso balancing the sweetness.  Upon exhaling I notice the spice, semi sweet and mildly peppery, making my tongue and sinuses tingle.  The aftertaste has a hint of cream at first, but finishes woody with hints of espresso.  As the cigar progresses the core flavors were always that oak, cocoa, and earthy sweetness.  To me, it’s like being by a campfire with my father, sharing a mug of coffee that’s been brewed in a percolator.  It brings up warm feelings with its full bodied flavor and is amazingly smooth.  The pepper is always most noticeable in the exhale, especially when partially exhaled through the nose.  It’s sharp and crisp, a definite contrast that breaks apart the core flavors between puffs so it never gets boring.  Interestingly, when I made it a point to push the smoke out with my tongue I picked up the sweet creamy flavors heavily and little of the blend of sweet and peppery spices.  However, the creamy flavors were more in the aftertaste if I let some of the smoke out through my nose and the spices would hit me full force.  There were hints of leather as well, but that came and went, and was more noticeable if I let the cigar rest for a minute or two before taking my next puff.

The burn was near flawless on this cigar.  Padron is famous for their consistency and quality; the Anniversary lines even more so.  Not once did I have to correct the burn on this cigar, and it was always straight.  The ash was quite solid as well, actually having to be tapped off of the cigar against the ashtray each time.  It burns a pleasant light grey with dark grey bands from the oils in the leaves.  A close look shows mild bumps from the oils and tooth on the leaves as well, something that I’ve noticed many Padron cigars tend to do.  The draw was perfect with each puff, and never got hot or harsh.  I attribute that and its long burn time of over 2 hours to the box press, which seems to keep the leaves perfectly packed for an even burn and open airway.

I love these cigars.  I can’t state how I feel about them in a simpler way; I just love them.  Padron cigars, the 1964 Anniversary lines in particular, are how I gauge every other cigar I smoke in terms of quality, price, and taste.  I have yet to find another maker that is this consistent from box to box, cigar to cigar in their excellently rolled cigars.  The flavor profile is something I enjoy and is consistent from year to year, box to box.  And as for price, well, that’s something that you’ll have to decide on yourself.  The price for this vitola ranges from your source, but I’ve averaged out around $16, give or take a few dollars.  It seems like a steep price, but let me explain it this way.  For $15-18 you get a full bodied complex cigar with a wonderful flavor profile that, if stored correctly, will burn cool and even from start to finish, and last you well over 2 hours if you take your time and enjoy it.  I’ve gone on about this jewel of a cigar enough.  I highly encourage you to pick one up sometime and try it yourself; perhaps start with a smaller size first and then this one when you understand firsthand how enjoyable these cigars are.

I’d like to thank Center Street Cigars for giving me an excellent experience when I visited them.  I bought this Diplomatico from Kyle at his shop, and he is one of the most laid back, well spoken, and pleasant people I’ve met so far.  Furthermore, he has a wonderful little shop in NJ, and made my trip visiting family even better with his courteous and friendly character.