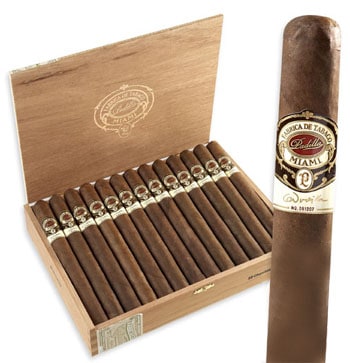 Padilla cigars are produced by Ernesto Padilla, who began producing them in 2003.  In a short amount of time he has created numerous blends and lines, many of which are quite well liked by many cigar smokers and aficionados alike.  The Miami line is a blend created by Don Pepin Garcia in Miami, FL.  Adding to the allure of having a master roller and blender like Pepin working on this line, the Miami is also a limited edition that falls under the “boutique cigar” category.  It isn’t mass produced, and concentrates heavily on quality over quantity.  This particular vitola is a robusto, measuring in at 5×50 and made entirely with corojo or criollo leaves.  The wrapper is Cuban seed corojo, the binder is Cuban seed criollo, and the filler is a blend of Cuban seed corojo and criollo.  It may sound like a dull blend, but I assure you that it is not.

I sit back and looked out at a wonderful day in North Carolina, with the warm sun shining down on me.  I pick up the cigar and slowly turn it over in my fingers.  It’s a very well rolled cigar, well packed with tobacco leaves under a thick veiny and toothy wrapper.  The wrapper is a darker wrapper, and looks like a maduro at first glance.  A few sunspots dot the foot of the wrapper, but it doesn’t detract from the appearance.  It has a solid, rugged, rich, and sweet appearance.  True to Pepin’s Cuban style of rolling cigars, there is a very nice triple cap as well.  The scent is sweet like chocolate; I could swear it’s like the cigar is, in fact, made out of a chocolate bar; that’s how sweet it smelled.  I enjoyed it thoroughly and almost didn’t want to smoke it because of that.  But there’s little fun in just holding a cigar, so I proceed to toast the foot with three matches and get it to a nice red glow before cutting it and taking my first few puffs.

The first few puffs give me a nice full bodied smoke that is full of flavors.  It’s sweet and earthy, with strong flavors of a rich baker’s chocolate and sweet nuts that coat the palate, and a hint of a peppery spice.  The flavors coat the palate well, and leave a lingering flavor of coffee and scotch.  As I continued on with the cigar I’m given images of a rich brick of dark chocolate my grandmother would use in her baking.  The nuts remind me of pistachios, not too sweet but very much there in the blend.  The coffee flavor that comes towards the finish is black and dark roast, mingling with that hint of scotch.  I feel like I’m sitting with my family after dinner when everyone is talking and enjoying drinks together, grandma bringing in her Turkish coffee, uncles drinking their tumblers of their choice of whiskey.    The pepper comes and goes, and is always towards the finish.  It’s very brief, which surprises me for a cigar blended by Pepin.  However, I thought it was better that way since it only broke up the flavors so I could taste them more clearly.  Other hints of caramel come as well, but just hints of it, soon replaced by the cocoa and coffee.  Yes, I’m very much reminded of dinner with my family now, the caramel bringing to mind my aunt’s crème caramel served out as we have drinks.

The cigar burns very evenly, although some attention is needed to keep it that way.  The corojo and criollo leaves seem to soak up much moisture, and thus need a little more attention in order to keep it burning well.  This could be remedied easily by keeping it at a lower humidity level in your humidor, or dry boxing it prior to smoking.  The ash is a rather ugly dark grey and black, heavily striped as it burns along.  The ash lasts around an inch before falling on its own, but that’s an aesthetic quality and doesn’t detract from the bold flavors of the cigar.  I’d attribute that to the higher moisture content of the cigar, and smoking a second one after some time in a separate humidor to dry box it gave a lighter ash.

Overall the Padilla Miami robusto was a solid cigar that I found very enjoyable.  The flavors were very strong and took little effort to identify them.  I immediately drew images from them, and all of which were very pleasant.  The cigar paired very well with the black coffee I was drinking, allowing me to easily taste the cigar over the coffee.  Given the chance, I would easily buy more of these cigars for something after a strong meal with red meat and a good drink to enjoy outside with friends.  I would even buy a few to share with my colleagues as we sat around after a long day and enjoyed the cool evening.  Considering the price, at around $164 for a box of 25, that’s something that most can afford to do, and I’d consider an excellent price.

As a special note I highly stress keeping these cigars at a lower humidity or dry boxing them.  The wrapper isn’t thin and isn’t likely to split on you if you’re careful, but considering the higher cost, be sure to bring them down from a higher humidity slowly.  This isn’t a yard cigar to smoke when doing work outside.  I find this to be a cigar to enjoy after a good dinner with friends who can appreciate a full bodied and flavorful cigar.  I’d like to thank Jarrod from TexCigars for gifting me two of these and allowing me to review them; they were most definitely excellent.