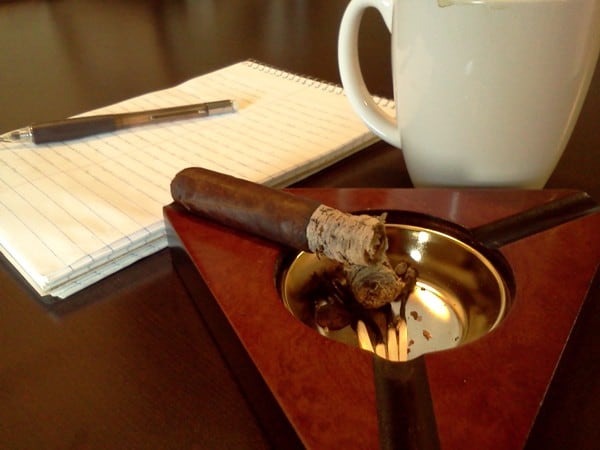 La Flor Dominicana cigars are a Dominican produced by Litto Gomez.  LFD is a relatively new name to the cigar world compared to more established makers such as Romeo y Julieta or Montecristo.  However, youth doesn’t mean the cigars aren’t well made or well blended.  Though only introduced in 1994, LFD has had success in making numerous quality blends that are flavorful, complex, and robust.  The Ligero and Double Ligero lines, which use the upper leaves of the tobacco plant that tend to receive the most sunlight and nutrients, are the most bold and flavorful.  I was gifted two LFD Ligero L250s from Jarrod at TexCigars wrapped in a dark Ecuadorian Sumatra Oscuro leaf.  The filler and binder are Dominican grown ligero leaves grown on Litto’s own farm, and the cigar measures 4 ¾ x 48.

The oscuro wrapper has been described as dark and oily, enough so that you can see it shine in the right light.  People weren’t exaggerating; the wrapper is as promised, as well as thick and rugged.  There are a few prominent veins, but I don’t fault the cigar for it.  With a wrapper this thick I expect it, and it adds to the rough appearance.  The rough appearance doesn’t entirely reflect the texture though; while it isn’t smooth as silk, it’s not like cheap brown paper either.  Rather, it feels like parchment paper that’s been worn.  It has a semi soft and felt like feel to it that’s pleasantly surprising for its appearance.  I keep turning the cigar in my fingers as I look it over.  The cigar feels firm; very firm at that.  I almost worry that the draw will be too tight because it feels solid as a brick, but that worry will be lifted later on.

The scent of the cigar is very strong, with a sweet earthy scent.  It has hints of chocolate and a floral note to it.  As I keep taking in its scent I’m reminded more and more of being a kid in my grandmother’s garden.  It’s like when she would give me a few pieces of Lindt milk chocolate and let me watch her work on the roses in her garden: the sweet scent of the roses mixing with that rich earthy scent of the dark hearty soil.  It’s a very pleasing scent, and one that I enjoyed as much as the cigar itself.

I take my time toasting the foot of the cigar with wooden matches, getting it glowing red before cutting the cap.  The cigar is easily lit with a little patience, and the smoke has a very sweet scent.  I can even smell the oils in the wrapper burning, giving a distinct tang to the smoke.  Finally I take a puff from the cigar and give a light retrohale.  I’m greeted with a burst of red and black pepper on the tongue and nose.  It isn’t overpowering or overly intense, but it’s very much present.  It leaves my nose tingling for a few seconds before fading and giving way to a sweet earthy taste mixed with a woody note.  The smoke gives a bold and medium to full bodied flavor that’s rich but far from being overpowering.  It definitely grabs your attention without kicking you to the ground and being harsh on the palate.  Further into the cigar I get hints of other flavors in the profile; I get notes of sweet spices and aromatics.  There’s hints of licorice that leads into an herbal note in the finish.  The finish gives a refreshing lingering flavor on the tongue that helps clear the palate before the next puff.

As the cigar progresses the pepper tones down gradually, but is always the first thing I taste.  It’s a mix of red and black pepper that fades into a sweet earthiness.  That earthiness blends with an oak-like woodiness, and fades into a pleasant herbal note.  Minor hints of more subtle sweet spices add to the flavor profile of the cigar, mingling in after the burst of pepper.  Overall it makes for a bold cigar that’s full of flavor but isn’t overpowering.  The flavors bring to mind a spicy and hearty meal.  The peppers are like the introduction to a bold meal that gives way to a hearty filling with a well balanced side dish.  I feel like I’m sitting at the family table when grandma cooks shish kabobs.  The taste of the peppers she spices the meats with, the hearty and earthy tastes imparted to the rich and filling main course, and the hints of the garnishes and arak that my uncle would pour for me.  It’s a bold and filling cigar that satisfies the palate.

The cigars burned evenly and held a solid light grey ash, short a few shades of being white.  Despite the thick wrappers on these cigars they had no issue burning strait without tunneling or canoeing.  I was able to smoke these cigars down to the nub, stopping only because my fingers were getting toasted.  Despite that, the smoke was never harsh and had no bite to it, asides from the peppery flavor.  The only thing I thought was a little odd was that the wrapper itself left a salty note on the lips that became a sweet rich tobacco flavor.  It wasn’t unpleasant, but it surprised me the first time I tasted it.  It wasn’t a fluke, as both cigars did the same thing.  It might be unpleasant for a few, but I didn’t mind it since it didn’t affect the flavor of the smoke, and it easily washed away with a sip of coffee.

These were excellent cigars that each brought roughly an hour of enjoyment.  These cigars aren’t mild smokes, and I’m glad I chose to smoke them after eating a good meal.  Even after a hearty dinner I could still clearly taste the cigars.   My favorite cigars are Padrons, but LFD is now on par with them.  The flavors I taste are ones I enjoy greatly, and from the LFD cigars I’ve smoked from Jarrod and at my local tobacconist, they’ve been very consistent and well priced.  TexCigars lists these at roughly $5.33 each, or $128 for a box of 24.  At that price I’d gladly buy a box and enjoy them as an after dinner smoke.  They are definitely worth every penny, and I’ll be happy to get a box in the near future.  Thanks, Jarrod, for sending me these to review, and I hope you pick one of these up to try out sometime.