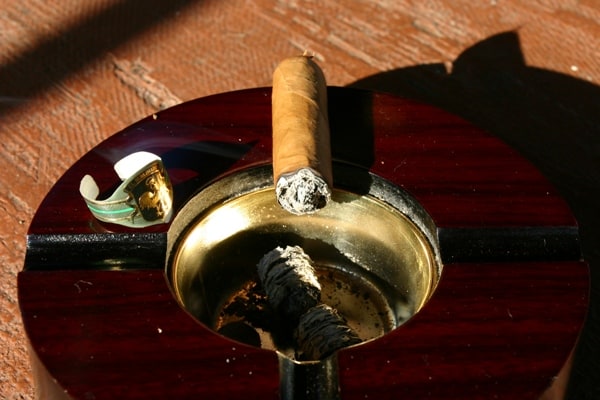 Infused cigars.  The two words together tend to bring hate and discontent among many cigar smokers for various reasons.  Many of them have a chemical taste to them from being flavored rather than infused, low in the quality of the tobacco, or just the taste of the cigar itself.  There are few cigar makers that can do it well, and even they have quite an uphill struggle with more traditional cigar smokers who would prefer a Padron, Romeo y Julieta, or Montecristo.  The Marty family of Honduras managed to do it well though, with the El Incomparable and El Sublimado lines.

The two lines were first introduced in the 1990s during the cigar boom, and they were high end infused cigars using, at the time, 25 year old Glenfarclas Single Malt Scotch for the Incomparable and 50 year old Noces d’Or Cognac for the Sublimado.  The tobacco is claimed to be top of the line as well, with little spared in making a quality cigar.  Both lines use Ecuadorian-grown wrapper, Nicaraguan binder and Dominican, Mexican and Nicaraguan filler leaves.  Unfortunately, the cigars ceased being produced by 2000 due to the cigar boom ending and internal arguments on how to best produce the cigars.

I’ll start with the Incomparable.  I was given a corona size to review, measuring 6×44.  The wrapper is a lighter brown, the color of light milk chocolate almost.  The light shade allows the thin veins to show more, though they aren’t very thick, and don’t affect the texture.  The texture itself is somewhat rough, like brown paper.  There aren’t any soft spots or visible flaws, the cigar looking and feeling well rolled.  Now comes the big test for all infused cigars: scent.  I bring it slowly to my nose and am greeted with the scent of vanilla, sweet spices, tobacco, and scotch.  The scotch is strong, but not overpowering, and compliments the scent of the tobacco.  I’m surprised by this, because many times infused cigars tend to be overwhelmingly strongly scented; not so much in this case.

I toast the foot and am greeted with mix of sweet tobacco smoke.  I don’t smell any of the scotch in the smoke as I toast the foot, only the tobacco.  I take a puff and find the draw to be a little stiff, but not impossible.  The flavors I’m greeted with surprise me.  I’m honestly expecting much more of the scotch flavor, but it’s more in the background for now.  It’s very much there, but not at the tip of the spear.  Rather, I taste more of a mild bodied earthy and woody note first, followed by a hint of leather.  The scotch blends in with all of these flavors, and gives the cigar an interesting character.  The flavor infusion isn’t overdone, but it isn’t overly subtle either.  You can taste it, but it isn’t the only thing that you taste.

As the cigar progresses, I notice the scotch pick up more.  By the beginning of the second half it’s much more noticeable, and a little less subtle.   The woody flavor becomes sharper as well, going from simply a general woody note to more definable oak.  The flavors all remain mild in body, never getting overly intense, but still very flavorful.  By the last couple inches, the scotch flavor, again, intensifies, and it’s at the front of the flavors now.  At this point I thought it was a bit much, but continued to smoke to see if there were any other changes.  I didn’t find many more, and the core flavors remained the same, if a little more in the background.

I’ll save my overall impressions for the very end of this article and move onto the Sublimado.  I was given a robusto to review, measuring in at 4.5×50.  The wrapper is a shade lighter than its cousin, looking like lightly tanned leather.  The veins are slightly more visible because of the lighter appearance, but again, they aren’t very thick and it’s what you would expect to see on a tobacco leaf.  Though the wrappers between the Incomparable and Sumblimado are the same, this one felt smoother, having an almost satin feel to it.  There aren’t any soft spots or aesthetic flaws, and the cigar itself looks quite nice.  The scent is sweet, with a slight floral note mixed with a subtle tobacco scent and cognac.  The cognac is much more subtle than the scotch in the Incomparable, but still very present.

I toast the tip and cut the cap, but to my embarrassment, I ended up shredding the filler a little, which you’ll see in a few of the photos.  This is partially because the leaves used were a little more delicate and I was less careful than usual, and I would suggest a good cutter such as a Xikar or Palio if you pick one of these cigars up.  I take a puff and find the draw to be much more relaxed than the Incomparable, allowing more smoke to come through.  The flavors I’m greeted with are a mild to medium bodied mix of earth, wood, charcoal, and a very subtle cognac.  The earthy and woody flavors are again at the fore, and make up the core of the flavors.  The charcoal and cognac come in towards the finish, with the cognac being very light and subtle.  The cognac flavor lasts through into the aftertaste, coating the palate pleasantly.  I’m finding the Sublimado to be similar to the Incomparable in that the infused flavors are more in the background rather than the front.  You can taste them, but you can still taste the flavors that the tobacco offers.

As the cigar progresses the cognac becomes a little more intense, but remains in the finish and aftertaste.  The earthy and woody flavors remain at the core of overall flavor profile.  Towards the second half a bit of spice develops, and the woody note sharpens into a more definable oak.  A new flavor starts to emerge as well, a hint of vanilla that comes into the finish and blends with the cognac.

Overall I was impressed with the cigars.  The flavors they were infused with weren’t overdone, and the overall flavors were enjoyable.  If the two, I enjoyed the Sublimado the most because the cognac infusion was much more subtle and consistent from start to finish.  I liked how I could taste it, but it wasn’t the dominant flavor, allowing the character of the tobacco to show through more.  Furthermore, the construction was quite good, shown in the evenness of the burn and complete lack of harshness or bitterness.  What I dislike about the cigars is that they will be hard pressed to find, and I’ve only heard of one source having them, Texas Cigar Brothers, at a price of roughly $85 for a box of five tubos.  That’s quite the price for a cigar, and I honestly would reserve that amount of money for a Padron Anniversary.   However, they are worth a try if you enjoy infused cigars and want something that’s a high end smoke.

As a final note, I’d like to thank Jim at Texas Cigar Brothers for sending me these two to smoke and try out.  I had never heard of them before, and was very much surprised by them.  They were good cigars that were enjoyable, and they broadened my experience with cigars.

Update: Jim at Texas Cigar Brothers has offered TAG readers an exclusive chance to try these cigars.  For a limited time, use coupon code “agentleman” to receive 20% your order of El Sublimado!