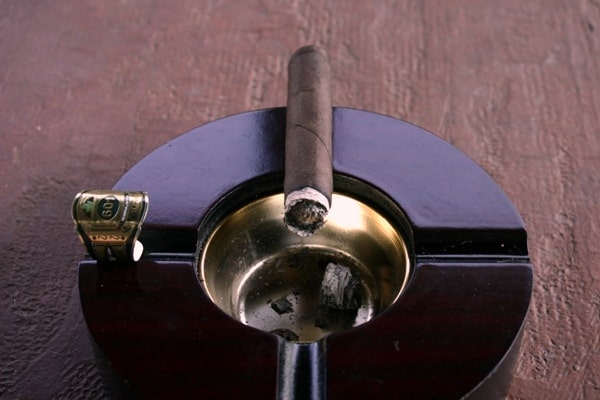 601 cigars are the creation of famed cigar maker Don Jose Pepin Garcia.  The cigars themselves are produced by United Tobacco Inc under EO Brands; however, they were blended by the great maker Don Pepin.  601 cigars are quite new, released as recently as 2006.  Though they are newcomers, that doesn’t mean there is any less quality put into them.  Don Pepin is well known in the tobacco world as a master blender, and has created numerous lines that are quite successful and sought after.  He is known for creating firecracker blends that offer lots of spice and complexity, as well as excellent construction and craftsmanship.

This particular cigar is a 601 Green Label in a corona size, measuring 4 ¾ x 44.  The wrapper is a gorgeous dark brown Nicaraguan Habano oscuro leaf, with a shade like darkly tanned leather, and has a slightly rough texture to it.  A closer look shows plenty of oils in the wrapper, a very mild amount of veins, and lots of tooth that gives it the rough texture.  The cigar feels very firm and well rolled, packed densely with Nicaraguan tobacco, both binder and filler.  The cigar really looks and feels more like a stick from an oak tree: solid, firm, and dense.  A gentle inhale near the foot of the cigar brings up images of a cedar forest after rainfall, with the rich scent of the fresh wood and dark soil.

Toasting the foot is very simple, the tobacco smoldering a nice bright red and giving the scent of charred cedar logs.  Cutting the cap with a Xikar leaves a clean cut with no tearing, and resistance is minimal.  I take a slow long puff, getting very little resistance and plenty of thick billowing smoke.   The smoke coats the palate and brings in more full bodied flavors of red and black peppers, oak, cedar, coffee, cocoa, and a sweet herbal finish.  It only takes a couple more puffs before the flavors start to settle and develop.  The red and black peppers are the first thing I taste, like biting into a peppercorn and the seeds of a cayenne pepper, making my tongue tingle.  Next comes a woody core of oak and cedar, shifting to a blend of coffee and cocoa.  Last is the sweet finish, having an herbal note to it as well as some sweet fruits like dates.

As the cigar progresses some flavors intensify, others fade out and are replaced.  The fruitiness fades out slowly and gradually while a charcoal and smoky note sets in.  The charcoal note blends into the other flavors throughout the cigar, giving the wood an interesting character.  It reminds me of many campfires I’ve had as a kid with my friends, the scent of the freshly split logs heavy with the smoke mingling in.  The coffee and cocoa intensify, with the charcoal carrying through.  It doesn’t taste burnt though, but more heavily roasted and darker.  The charcoal gives way in the sweet herbal finish though which comes and goes quickly towards the end of the cigar.

I’ve tried a handful of Pepin’s cigars before, and have enjoyed them all.  He has a reputation of creating strong blends that have plenty of kick from spices and pepper.  This is one of those cigars that furthers that reputation.  While the red and black peppers weren’t the only flavors, they were the first things I tasted, and were quite strong from start to finish.  I’ve found that this is exactly what I like after a strong dinner, and it made for a good after dinner smoke on the front porch.  The price of these cigars varies depending on where you look, ranging from $5-8.  I was able to find this cigar in a local shop in downtown Fredericksburg for a little over $7, and would still pay the same amount for another.  I was able to get roughly an hour and a half of smoking enjoyment from the cigar, which is impressive considering it’s relatively small size.  Along with a long smoke, I didn’t worry about the cigar going out, uneven burning, or harshness.  All in all it was a solid cigar and I would recommend you try one.