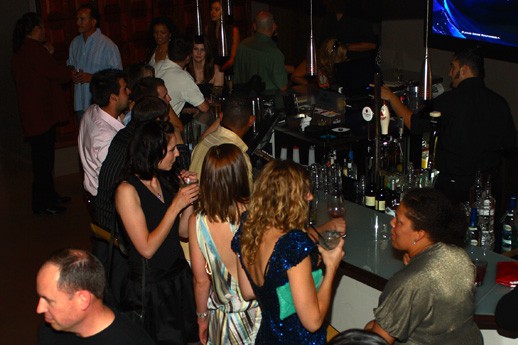 As I travel quite frequently, I often find myself in hotel bars or restaurants grabbing a beer or a dram after an arduous flight. However, a recent trip to Albuquerque proved to be something special. After arriving in Albuquerque after a long flight, I was more than ready for a dram in the hotel bar or a nearby establishment. Because the hotel was under renovations, a quick google search led me to a handful of pubs and bars in the nearby area (it was already 11pm at this point, ruling out most restaurants). One place in particular caught my eye. Imbibe, in the Nob Hill area of Albuquerque (near UNM), advertised itself as a Cigar Bar and Retail Tobacconist.  A cigar bar?  Coming from the immensely overbearing smoking laws in Canada (where all indoor smoking is prohibited, even in cigar shops), this sounded like a dream come true.  So at 11:30pm on a Monday night, I hopped in my rental car and made the drive over to Imbibe.

First appearances were rather uninspiring.  With a quiet-looking exterior set in a quiet area (granted it was almost midnight on a Monday), only a few neon lights set Imbibe apart from its neighbours.  With very little light inside and no activity, I initially thought it was closed.  Upon entering, there was no one inside but a bouncer reading the paper near the door; however, I was reassured by the wafting smell of premium tobacco.  He directed me around the corner to the (previously hidden) bar and walk-in humidor.

Imbibe looks like a typical bar, with considerable bottles and beer taps behind the bar, as well as a fair bit of lounge space and a rooftop patio.  Where it sets itself apart though is the very large walk-in humidor containing a wide range of cigars available, from Drew Estates Egg to a large assortment of Romeo y Julieta and other brands.  And for a bar, I was quite impressed by the prices (New Mexico does have some of the lowest tobacco taxes around).

I selected a Romeo y Julieta 1875 Petite Numero Dos en Tubos, which the staff offered to cut for me.  Unfortunately the cutter used was evidently quite dull, but the cut turned out acceptable enough.  I sat myself down at the bar with a complimentary copy of Cigar Magazine, and was greeted by the bartender, who informed me that Monday nights were happy hour all night.  $2 premium draft beers while enjoying a cigars — I was having a great time.  There were a few people smoking cigars, a couple smoking cigarettes, and a few with nothing.  The bartender mentioned that they try to push the cigars, but they’re alright with cigarettes as well.

The Romeo y Julieta surprised me with it’s even burn and evolving flavour profile, and the people around me were great company.  Top that all off with a final bill of under $20, and I was incredibly impressed with Imbibe.  I was told by the couple next to me that on Fridays and Saturdays there are a few too many popped collars and huge egos and attitudes around, but the relative calm of the Monday night crowd served me quite well.  Imbibe finds itself in a unique situation, with indoor smoking allowed in a fairly anti-smoking state.  The bartender told me that because of its status as a cigar bar and retail tobacconist, Imbibe has a special status which was grandfathered to it after the tobacco bans passed in New Mexico a few years back.

All in all, I highly recommend Imbibe for those in the area.  If you avoid the high-volume weekends, you’ll likely have a great time.  Combine a huge cigar selection, good drink specials, and friendly people and staff, and you can’t go wrong.