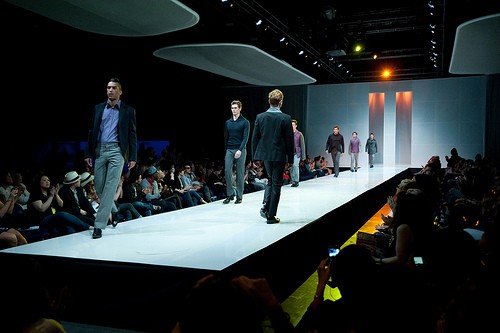 I will start off by admitting that when I was first tasked by my editor to cover the men’s portion of Seattle Fashion Week my level of enthusiasm was what you might expect from a death row inmate on his way to his execution. My past experiences of fashion weeks spent in New York and Los Angeles spoke to the reason why the word “pretentious” exist in the English Dictionary. The portion of the weekly shows dedicated to men’s fashion, while being extremely minuscule in comparison to that dedicated to women, is seemingly simply a parade of attire that fit somewhere between a performer at Cirque Du Soleil and the wardrobe befitting a full scale reenactment of Peter Pan and The Lost Boys. Essentially they never propose anything in the least bit for a man of practicality to wear, and being that that tends to define the majority of men today I can see why so many have begun to associate Fashion with a four letter word. I must admit even as a writer with a passion for style and clothing, much like a believer in a religion whose prayers have gone unanswered for too long, I had begun to have my doubts in regards to the future of men’s clothing. This could possibly be the reason that you will have to forgive me if I claim divine intervention as Seattle’s Fashion Week quickly dismissed my pre-conceived notions and exceeded my expectations.

As soon as I stepped into the official press junket for Fashion week I knew that something was different from my past forays into the world of high fashion. Gone was the exclusivity and pompousness that often times are associated with these events, replaced with a refreshingly down to earth air. Everyone involved in the production, from the designers to the shows organizers where extremely welcoming and accommodating. While this may appear normal in most circles I have come to discover that in the world of “fashion” the likelihood of finding the people I have just described has about the same probability of happening as a Six Sigma Event. The realization that I was in uncharted territory began with my interview of Maile Cabral Edwards, who along with being the shows main organizer could also challenge Jennifer Lopez claim to the world’s most beautiful woman. The very first words out of her mouth, in response to me asking her to describe a well dressed man where that “his clothes should fit well at all times.” I believe that I have heard that exact statement somewhere before… She also went into how a gentleman’s clothes should “coordinate properly” and “have some color to them.” I could not have said it better myself.As the main point person in putting the event together, she personally sought to make sure the men’s designers represented a ready to wear, practical quality to their clothes or as she put it “something that a man would actually wear.” In this world of “skinny” jeans and “thunder” crotch pants that simple statement could be one of the most profound I have ever heard uttered in the world of high fashion. She along with her colleague Tanya of The Finerie, who assisted in providing the shows designers, went on to express the importance of Timeless fashion and the “any age” demographic that it attracted. I must say that their pronouncements certainly peaked what until that time had been a rather flippant attitude to the men’s fashion show.

For those of you who have never been to a fashion show and have no imminent plans to attend one, let me sum up the experience in brief by saying that they often times come off as a mixture between the pageantry of the Miss Universe contest combined with the manufactured pomp and circumstance of Wrestlemania. They often times have a bit of comedy and music sandwiched in between the actual show. If you’re fortunate, much as I was at this particular show, those two bookends will accent the event as opposed to distracting from it. This was especially true of the musical artist Adrian who performed after the show and appeared as good a dresser as he was a performer. Many times you unfortunately get a show that is meant to be classy that features an act that is anything but. Imagine with me the image of some dapper fellows in full tux and tails drinking martinis while listening to the venerable Sir-Mix-A Lot classic “Baby Got Back.” To the shows credit another brownie point was awarded to it by the fact that every designer who was presenting had what they described as an “ethical component” to the design of their clothing. This meant that all the material used was environmentally friendly. I should not have been surprised; I suppose being a friend of the environment is identifiable with the Northwest Region of the United States as rain, which it thankfully did not do the day of the show.

The actual show itself consisted of five designers, Built For Man, Voss Rock, Jordan Klein (no relation to Calvin), Moods of Norway, and Darkheart. Many of these designs claimed to represent the future of men’s fashion. I can say that after seeing all of the collections that one can only hope that those claims prove true, for four of the designers anyway. The majority of lines put on display where something that any gentleman could put on and proudly wear out of his home without fear of embarrassment. Built For Man had a wonderful assortment of Jackets and Henley’s that had classic and subtle touches such as triangle cuffs. Voss Rock had a futuristic take on guys clothing. I normally am not much of a fan of this type of design being a traditionalist; however her slight touches had me appreciating her design the more I saw it. Imagine what a well dressed Captain Kirk would look like in the 25th century, if they kept the rules of classic style somewhat in tact. Jordan Klein’s collection proved to be my personal favorite. I will let his succinct statement describe his clothing, “The way a gentleman is supposed to dress.” The last one that I would categorize for our purposes was Moods of Norway, with their motto of brining happiness to men’s style, I’ll have to say they did an excellent job of bringing a smile to many attendants faces with their festive jackets, sweaters and blazers, that would prove ideal for a vacation to a tropical oasis or simply to add a bit of playfulness to your wardrobe.

Ultimately I must say that after grudgingly accepting this assignment, for the reasons I have previously outlined, I was quite impressed by Seattle Fashion week. While not as widely heralded or appreciated as the Fashion Weeks of New York, Los Angeles, and Paris, it may just be the best in terms of bridging the gap between the “art” of fashion and the subtle practicality of style. It presented an appreciation of timelessness of style that can be expressed in any era. It provided a platform that championed men dressing as men should. It proposed clothing that a man could define himself with and not decorate himself in. One can only wish that the rest of the world of “high” fashion could take its cues from the city of Seattle… at least for one week out of the year.
Marcus Green is the author of A Year Without April, and lives in Seattle,WA.  His motto is that “90% of life is simply showing up…dressed well.”