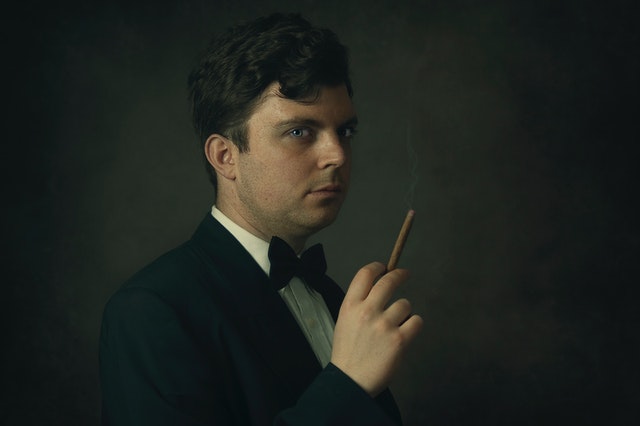 Ever want to smoke a cigar at a formal party? What about sip a scotch? Did you ever skip these simple pleasures out of fear of staining or smelling up your suit? Now, a man can enjoy a cigar and scotch without worrying about irreparably damaging his nice suit.

Men love a party where they can enjoy a good glass of scotch and a fine cigar. Something about this combination exclaims manliness and men happily partake of them in the company of other men. Parties unfortunately don’t last forever, but the worst part of them can: a smelly or stained suit. What happens in the event that some precious liquid falls onto your fine suit? What about getting that cigar smell out of your clothes (sure you love it, but your wife and coworkers don’t)? This guide will help you keep the great memories of the party without living with a scotch stain or a suit that smells like cigar smoke.

The Importance of Dry Cleaning

Regardless of whether your suit smells of cigars or has a scotch stain, taking the garment to a good dry cleaner as soon as possible is the first and most important step. The dry cleaning process is supposed to remove stains and smells, after all. When you drop off the clothes, point out any stains in need of removal and tell the cleaner what the stain is. Tell them also if the clothes reek of smoke and that you need them deodorized.

Getting Cigar Odor out of a Suit

Assuming you’re going to get your suit to a dry cleaner as soon as possible, there are some things you can do to keep the cigar smoke smell from residing permanently in your suit.

Treating a Scotch Stain on a Suit

Spilling scotch on a suit doesn’t mean the end. Here are the steps to treating a scotch stain whether at home or away:

When the Scotch and Cigar Party is at Home or Away

Don’t ever again be afraid to indulge in the gentleman’s pleasure of a scotch and cigar. Bookmark this article and read it over before you head out to that party, and make sure you have a wet spotter in the glove box. While you’re at it, buy a small spray bottle and fill it with Febreeze (can’t do this with vodka because it would violate open container laws – do not keep alcohol in your car! Also, don’t drink and drive!), and put it in a plastic bag with the wet spotter, and you’ll be ready for it all. Give yourself a quick spray with Febreeze before you drive off and you’ll save everyone from smelling cigars on you when you get home.

If a spill happens at your place, you’ll know exactly what to do whether it’s on you or someone else, so lend a hand if it happens.

Unafraid of what might happen, go on out there and have a night with a cigar, scotch, and some great company. You’ll know how to take care of your suit no matter what.

Antonio Centeno is President of A Tailored Suit, an online American boutique fine-clothing merchant specializing in bespoke men’s suits, shirts, jackets, and overcoats. The company’s mission is to help men create the clothing that best enhances their individual style. Antonio studied men’s clothing design in London, Hong Kong, and Bangkok; he is a former US Marine with an MBA from UT Austin and a BA from Cornell College.

Timothy Broderick is currently studying men’s style and fashion under Antonio Centeno at A Tailored Suit. He hopes to further his knowledge on these subjects and to attain a position with A Tailored Suit helping men find clothing that best suits their personal style and personality.

Photo by graham wizardo from Pexels