In the last 10 years, moonshine has seen a renewal that has elevated the beverage from obscurity to the focus of artisans nationwide. Born outside the law, moonshine went from a cheap booze for rural farmers, to a national crime syndicate centerpiece, to a modern connoisseur’s novelty. Moonshine’s immutable production highlighted the futility of prohibition, ending the “noble experiment” as quickly as it started. However, moonshine’s reputation was unable to quickly recover and the drink slipped into historical obscurity before returning with a vengeance some 50 years later.

As the country aged, the formative nature of periods like prohibition started becoming more important to Americans. By the 1990’s, moonshine’s notoriety was becoming more romanticized much like stories from America’s “Wild West.” Spurred by this renewal in public opinion, artisan distillers began capitalizing on the historical counter-culture reputation of moonshine. New techniques were soon developed to make the beverage more appealing to a wide audience. By substituting the traditional corn mash with the more inert flavor of a sugar mash, flavored moonshines became much easier to produce. Today, moonshine is marketed mostly as an edgey novelty from America’s outlaw past. However, distillers around the world are beginning to dial in their recipes and force the spirit to be taken more and more seriously.

Born Outside the Law

Moonshine’s genesis was actually relatively innocent. Rural farmers in the Appalachian region were leading an extremely challenging existence financially. Most were extremely poor and managing little more than a subsistence living. Some clever farmers soon realized that by fermenting and distilling their cash crop, corn, they could increase their margins. It wasn’t long before corn mash moonshine was so ubiquitous and valuable in the area that it actually became a de facto currency.

Right after the end of the Revolutionary War, the federal government was in need of a cash infusion. They found their solution in the form of an excise tax on whiskey. This tax was supposed to be imposed on the moonshine that was being traded in Appalachia, however it went largely ignored. Intrepid tax collectors would venture into the area with the intent of collecting the tax revenue owed. Most of the time the tax collectors were met with mild resistance like tar and feather or other forms of general defiance. However, at times these clashes ended in violence. The friction that occurred in the area began to create moonshine’s outlaw stigma.

The federal government quickly ramped up their efforts to collect excise tax on Appalachian moonshiners. The tax was seen by residents of the area as targeting poor, rural farmers. Seeing as how many of the residents of the region were already getting by on a strict subsistence lifestyle, this tax was regarded as completely unfair. It didn’t take long for organized discussions of the tax to sprout up in the region. Emboldened by a collective outrage, some voices urging for a rebellion began to gain favor. Soon there was enough support for a full-fledged armed rebellion against the federal government to manifest in Appalachia.

On Capitol Hill, this rebellion very quickly became a major issue. The United States was in its infancy and couldn’t allow a rebellion to blemish its reputation of strength. Battalions of American soldiers were promptly dispatched to the region. Seeing they were outgunned by orders of magnitude, the rebellion dissolved as quickly as it began. Fighters that had taken up arms quickly slipped back into the woods to quietly continue on with their former way of life.

The rebellion was stopped, but the issues that created it were left in place. Knowing that a full fledged rebellion was not a realistic option, the Appalachians slipped back into illegal activities to circumvent the tax. The region solidified itself as an outlaw state, America’s dark alley you want to avoid at night. The government also learned a lesson. The Appalachian Mountains were a powder keg, so don’t press your luck. Pressure to pay taxes quietly eased up in the region and there was a tenuous peace that lasted several decades.

The end of the 19th century saw the rise of America’s Temperance Movement. As a country founded on Puritan values, it was only a matter of time before a fundamentalist Christian political movement hit the scene. After gaining steam in Europe for some years, The Temperance Movement’s sole objective was to curtail American consumption of alcohol. The papers began spinning the Whiskey Rebellion as being “alcohol induced,” priming the American public to support the Temperance Movement. Within a few decades the movement had garnered enough support to move to their next phase. 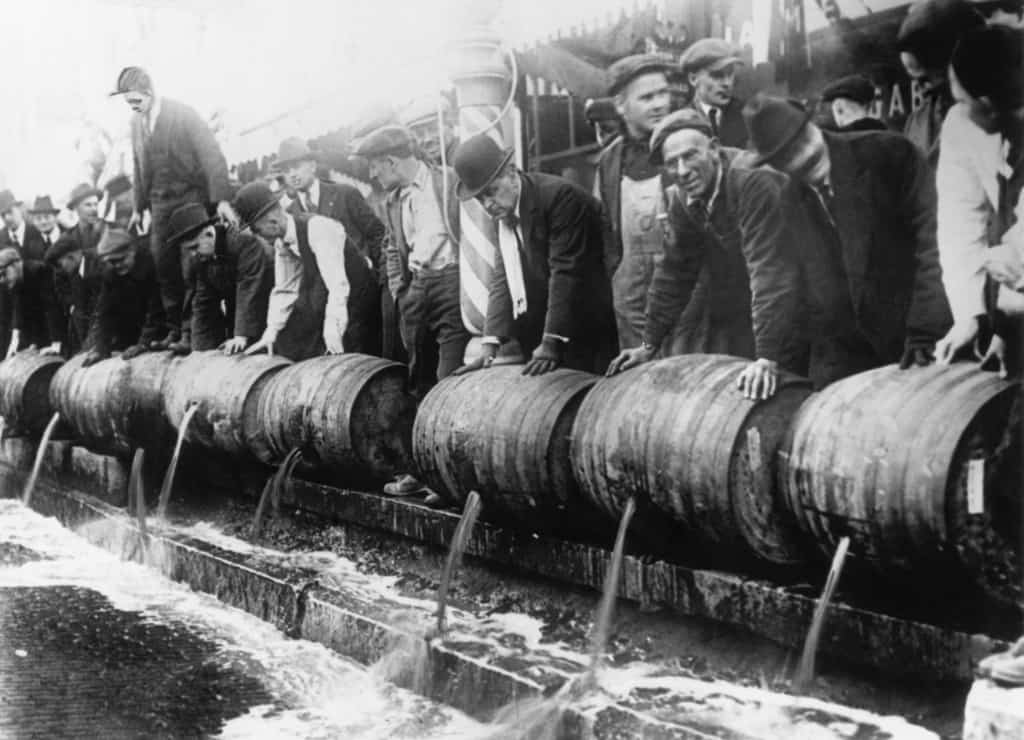 By the turn of the 20th century the American Temperance Movement had hit a critical mass. The American public was ready to pull the trigger on “The Noble Experiment.” The idea was that by prohibiting the sale of alcohol nationwide, the collective ethics of the country would improve. Much of the public opinion was driven by the idea that alcohol inhibited self-governing thought. The clashes with authority in the Appalachian Mountains were pointed to often as an example of alcohol-induced rebellion. In 1920 prohibition was passed and remained in effect until 1933.

Basic economics teaches us that supply will find demand. If demand is strong enough, this behavior is as reliable as gravity. As a market that is currently over $200 billion in annual revenue, alcohol had the demand necessary to drive supply, prohibition or not. For moonshiners, prohibition was like throwing gasoline on a fire. Moonshine was already versed in existing outside the law because of its quarrels with federal tax laws. The stills were well-hidden in remote, mountainous terrain and their operators had a deep disdain for federal lawmakers. Moonshine began to flow out of the Appalachian Mountains in greater quantities than ever before. There was just one missing piece of the supply chain, distribution.

Moonshiners found their distribution arm in the form of the Mob. Like the moonshiners, the American Mafia already had the logistics built for operating outside the law. The notorious organized crime syndicate had been slowly building its operation for nearly 100 years. When prohibition hit, one of the biggest markets in the country turned black overnight. The Mob set to work to pin down reliable suppliers that could fill the insatiable demand. A massive chunk of this supply was filled by moonshiners in the Appalachian Mountains. The stage was now set to circumvent the law and get booze back into the gullets of Americans willing to pay the newly inflated prices.

The powers that be had no interest in letting a black market flourish. Prohibition was intended to put a stop to American alcohol consumption, not make criminals rich. So law enforcement quickly began reacting to the new wave of outlaws. One of the easiest ways to interrupt alcohol’s black market was to target its transportation. So began the cat and mouse game between bootleggers, as they became known, and police.

The automobile was still a relatively new technology in terms of mass market adoption. Therefore, performance had yet to become a major consideration for manufacturers. Some of the first people to put automobile performance under the microscope were prohibition-era bootleggers. Looking for any available opportunity to get an edge over their pursuers, bootleggers were ingenious with their performance modifications. Fast cars quickly took their place as symbols of male bravado and bootleggers began competing amongst themselves to sort out who had the best setup. These competitions slowly grew more and more organized.

By the 1940’s the popularity of car racing, spurred by Appalachian “‘shine runners,” was so intense that the sport of Nascar was officially formed. Today Nascar is one of the most popular sporting events in the United States.

In 1933 prohibition ended and America’s alcohol was back to business as usual. Moonshine slipped back into its obscure corner of taxation illegality. Because it had existed for so long without regulation, the beverage had been produced mainly for quantity rather than quality. Tales of moonshine-induced blindness or just anecdotal accounts of its harsh taste made it widely unpopular. Once again, moonshine took its place as being reserved exclusively for poor folks looking for a cheap buzz. This reputation held strong for nearly half a century. 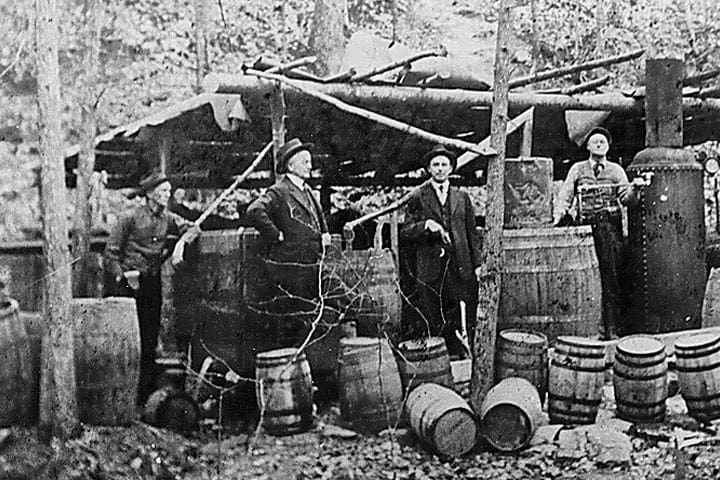 As the country moved into the new millennium, its violent past became more of a badge of honor than a national point of embarrassment. Popular culture began glorifying the criminal activity of prohibition-era mobsters much like the outlaws of the wild west saw in previous decades. This new found attitude trickled to creative craft distillers looking for a way to set themselves apart in the marketplace. Using their in-depth knowledge of distilling, these artists began producing moonshine with top shelf quality.

Of course, moonshine wouldn’t be true to itself it didn’t find a way to break the law. Most states in the United States have made it illegal to distill alcohol at home. In fact, most of them have stated that it will remain illegal even if the federal government legalizes the activity. However, it is not illegal to purchase distilling equipment. Because of this, moonshine has settled into the most diverse production it has ever seen. The hobby distilling market in the United States grows larger every year, regardless of its illegality. Not only is production more alive than ever, moonshine’s quality is also higher than ever. Being gifted a jar of modern moonshine is a common occurrence for many Americans, even though the practice is often completely illegal. The mysterious beverage has found its place once again, being traded under the cover of moonlight.

Moonshine will likely continue to gain popularity. The beverage is beginning to be seen as something as American as apple pie. In fact, the most popular flavor of moonshine today is apple pie. Go grab a jar today and take a walk in the moonlight.