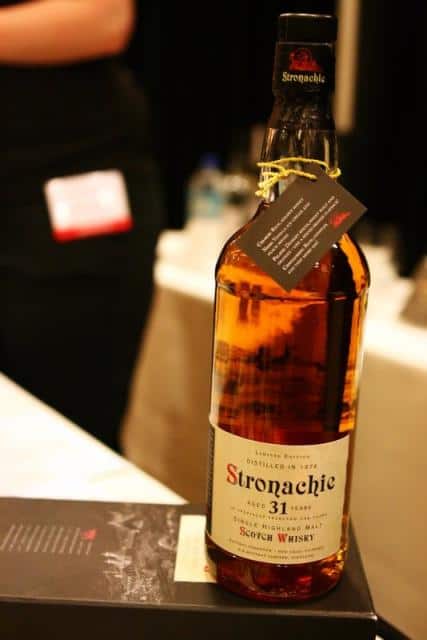 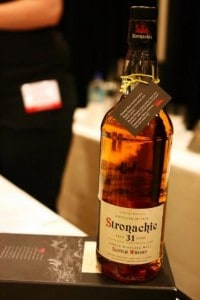 All that remains of the Stronachie distillery, dismantled in 1930, is a small area of low stone walls.  A martyr of the whisky slump following (and during) the first world war, the Stronachie name is now owned by A.D. Rattray (formerly Dewar Rattray), who, in 2002, sampled a bottle of original Stronachie from 1904 and decided to re-create and distribute the Stronachie brand.  In pursuing a distillery which closely resembled the 1904 whisky, the ultimate winner was Benrinnes; as such, any currently branded Stronachie whiskies are bottlings of Benrinnes casks.

…bringing us to Benrinnes, nestled beside Aberlour distillery (Speyside) at the foot of the mountain of the same name.  Established in 1926 and originally named Lyne of Ruthie (after a nearby waterfall), the distillery was destroyed by a flood in 1929, and after being rebuilt, has switched ownership a handful of times, leaving it currently nestled in the Diageo portfolio.  In 1978 Benrinnes switched to triple distillation (think Auchentoshan), a highly unusual feature in a Speyside whisky.  Interestingly, this makes the Stronachie 1976 one of the only available twice-distilled Benrinnes whiskies available.  We were fortunate to get our hands on some this past week; here’s our take on this rare (but still available online and elsewhere for roughly $300/bottle) whisky.

While the Stronachie 12 Years Old is the most common Stronachie (Benrinnes) bottling, in 2008 A.D. Rattray released a vatting of 4 Benrinnes casks (roughly 800 bottles) dated 1976.  Bottled at cask strength (52.6%), this 31 year old Benrinnes has a surprisingly light straw color, and the nose packs an immediate alcohol punch.  The first flavors that appear on the nose are citrus, buttery caramel, and vanilla, with the latter opening up even more with a drop of water.  Not only does a drop of water open up the vanilla tones, it also reigns in the alcohol bite as well as the undertones of smokiness, turning this dram into a more traditional Speyside. On the palate, Stronachie 1976 has a velvety feel with honey coming through clearly.  The whisky coats the mouth like syrup, leaving a pleasant mouthfeel.  The finish is very citrusy (oranges mostly) and minty, with a smokey kick.

All in all, the Stronachie 1976 vintage is an outstanding and complex whisky, sitting well apart from just about every other whisky we have tasted.  Also, consider this a rare opportunity to taste a twice-distilled Benrinnes — a treat that surely won’t present itself again.

Why Are Bitcoins So Popular Today?

The best wine to pair with 5 signature dishes