This is the second in this series of reviews on cigars by Villiger Stokkebye.  To give a quick recap on Villiger Stokkebye’s history, the company was started by two families, Villiger and Stokkebye, in 1888 and 1882 respectively.  The two families combined to create Villiger Stokkebye International, and have become very well known for their quality tobacco products ranging from machine and hand rolled cigars to pipes.  The last review gave a sneak preview of an upcoming cigar line, La Capitana.  This review will take a look at one of the more recent lines to come from VSI, the La Libertad. 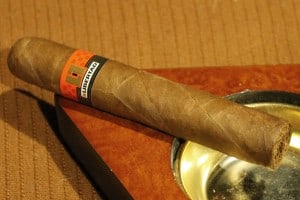 La Libertad is the newest line of handmade cigars to come from VSI.  It’s made with Habano seed Peruvian leaf wrapper, Nicaraguan seed Peruvian leaf binder, and a blend of Dominican and Nicaraguan ligero leaves for filler.  This particular cigar is a robusto measuring in at 5×52.  The wrapper is a chocolate brown color with moderate veining and minimal tooth.  The cigar is packed and rolled well with no soft spots and no hint of poor craftsmanship.  It’s put together much like Stokkebye’s pipes: solid and aesthetically pleasing.  Just as pleasant is the scent, which is a strong mix of earth, cedar, with a very slight floral note.

I sit down in the cool winter air besides a fire and cut the cap easily with a good cutter, and light light it just as easily.  I take a slow puff and get a mouthful of thick smoke bringing bold and sharp flavors.  The first thing to come to mind is the word spicy.  Red peppers that bring senses alight and make the mouth tingle without being harsh.  Earth and hickory come next, but are second to that hot spice.  Between those flavors are hints of cinnamon, adding another layer of flavor and mingling well with the hot peppers.

As the cigar progresses there are subtle flavor changes.  That hot spice remains the dominant flavor throughout the cigar, and only mellows out at the last third.  A hint of sweetness develops roughly halfway through, and starts to lend itself to the woody flavors.  The sweet earth and wood takes over the hot spices in the last third, making for a smooth and relaxing end to a good cigar.

The cigar was a very enjoyable cigar, especially at the end of the day after a hearty meal.  I liked how it had sharp robust flavors, but still stayed medium bodied.  It was full of flavor without being overwhelming, and made for a good end of the day cigar.  The solid construction kept the burn steady from start to finish, and allowed for plenty of smoke and an easy draw.  All of these things came together for a quality cigar.  The price is roughly $5.00 per cigar, which is quite a steal.  It’s hard to beat finding a cigar like this for that little, making it quite the gem when you can find them.  The only downfall to these cigars that I could find is that not many shops stock them, so if you are able to find them I’d highly suggest picking one up.

I want to give special thanks to VSI for sending me this cigar to review.  I highly suggest everyone to take a look at their site and see what products they have to offer.  There’s really something for everyone.