According to research by The Economist, Melbourne has been ranked as the world’s most livable city for the sixth year in a row with Australia, as a whole, ranking 11th on the league table for expat destinations.

But, just what is it about Melbourne that makes it so livable? Is it the climate, coastal location, economy or the culture? Or, is it a combination of all these things – and more – which serves to make it the most livable city and therefore, most attractive location in the world for expats?

A diverse and welcoming culture

With a population of more than six million, Melbourne is Australia’s second largest city. It’s home to a huge variety of people. In fact, 58% of the population have at least one parent born overseas.

One way Melbourne expresses its rich and diverse culture is through food. In this vibrant city, you’ll find an array of food culture from Italian and Greek to Japanese and Chinese. For example, Italian restaurants can be found in abundance along Lygon Street Carlton and if you visit Richmond, you’ll find Little Vietnam which hosts a variety of Vietnamese restaurants, bakeries, and gift stores.

If you move further into the city center, you’ll come across China Town, which is one of the major places in Melbourne to host the Lunar New Year Festival in celebration of the Chinese New Year. Here you’ll find an assortment of delicious food stalls offering a diverse range of delicacies from Greece, Thailand, Vietnam, Italy, Japan and China. You’ll also witness vibrant exciting performances including traditional Chinese lion and dragon dances.

These are just a few examples of the city’s rich cultural heritage which might help expats moving here to feel more comfortable; everyone is welcome in Melbourne.

Other than offering a wide selection of food options across different cultures, Melbourne has a unique café culture which further emphasizes their obsession with food.

With more than 1,600 cafes and restaurants to choose from, it’s not hard to see why Melbourne gained its reputation for being home to “the best cafés in the world”. Melbourne is also known for its relaxed, casual, and democratic food. A popular local dish for instance, is the smashed avocado, which is as simple yet delicious as its name implies.

It’s not only the vast number of cafés, the delicious food, or the world class coffee that kick-started Melbourne’s café culture to make it what it is today.

It’s the rich and diverse communities that make Melbourne’s café culture flourish. From families, groups of friends and corporate folk, to solitary individuals and even stereotypical “hipsters”, everyone and anyone are welcome. Melbourne’s inclusive café culture reflects the multi-cultural and welcoming nature of the city itself which might comfort expats when moving here.

Australia’s economy is currently growing, has a low rate of inflation (1.5%) and low rate of unemployment (5.9%). The services sector delivers 59% of the economy’s output, while the next two largest sectors – construction and manufacturing – deliver 9% and 7% output respectively.

Melbourne (the city and wider municipality) makes a significant contribution to both the Victorian and Australian economies: it accounts for 27% of Victoria’s Gross State Product and 6% of Australian Gross Domestic Product.

There are many employment opportunities for expats with backgrounds in finance, insurance, education, the arts, retail, healthcare and media. In fact, there are currently 450,336 jobs (not vacancies) in the municipality, with the most being in the professional, scientific and technical services industries. These sectors have also shown most growth since 2002 so expats with experience, qualifications and skills in these areas will likely find Melbourne an attractive place to be.

A total love of sport and leisure

It could be said that Melbourne gains a lot of its popularity because of its love for sport and leisure. From Australian “Aussie” Rules Football and Gravity Enduro to golf, tennis, surfing, soccer, speedway, horse racing, sailing, trail running, park runs, cricket and cycling, Melbourne does it, hosts it and loves it. There’s even a National Sports Museum and an entire sports precinct dedicated to, well, sport!

Expat fans of motor-racing will no doubt be delighted to hear that Melbourne will be holding the much anticipated F1 Australian Grand Prix at Albert Park which is scheduled for March 2018.

Melbourne is also home to more than 120 spas and exercise facilities, perfect for expats wanting to stay in good shape and good health. For expats looking for some outdoor exercise opportunities, the Botanical Gardens is a great place to visit. The Gardens feature a popular running and walking circuit known as “the tan” which hosts popular running events, and numerous running & exercise clubs.

As well as sports and leisure, culture and creativity is something Melbourne prides itself on. From the Melbourne International Comedy Festival (MICF) to independent art galleries, fashion shows, theatre and dance events, there is always something going on! 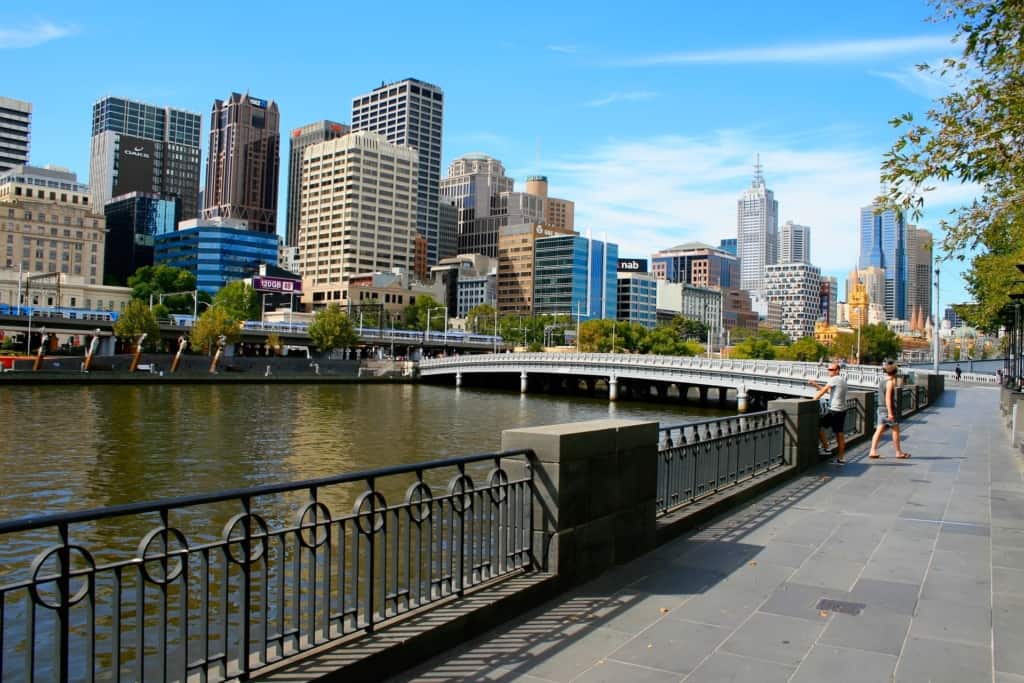 Melbourne’s warm weather could also be yet another reason why it’s deemed so livable and appealing to expats, especially those who are relocating from a colder climate and seeking a sunny escape. But it can also be unpredictable and ever-changing. There’s even a joke amongst the locals that you can experience all four seasons in one day!

Although, the city’s sometimes constant heat can be overwhelming: expats accustomed to more temperate climes need to prepare for high temperatures and humidity. For instance, in February 2009, temperatures soared to 46.4 °C (115 °F) leaving the city’s inhabitants sweltering.

Melbourne can be a very sunny paradise, but the heat can also be dangerous, which is why it’s important for everyone – not just expats new to warmer weather – to take precautions before venturing out. Luckily, the Victoria state government has a heat health alert system which notifies local governments, program areas, hospitals, the general community, and others of the extreme heat forecasts and heatwave conditions which are likely to impact on human health.

A contributing factor towards Melbourne being honored the title of “the world’s most livable city”, was their outstanding standard of healthcare. Known as Medicare, this system of universal medical cover is publicly funded and offers primary healthcare for Australian citizens, permanent residents and other categories of visitors.

This means that most residents of these countries will receive help with paying for essential medical treatments, whereas expats from countries that are not included, may not receive the same cover. To avoid uncertainty and ensure they have timely access to the appropriate healthcare, many expats choose to have international health insurance in place.

A perfect choice for expats

So, other than being rated top for stability, infrastructure, education, healthcare, and environment, Melbourne’s welcoming culture, diverse cuisine, variety of sporting events and growing economy, all serve to make it a very attractive place for expats and their families.