Everyone thinks their home stadium is the best. Understandable. You live there. Why wouldn’t you? But, there are a lot of stadiums out there worth visiting. Here are the top picks from the most fanatical baseball fans in the world.

Despite losing consecutive championships in 2010 through 2011, and also teetering on the brink of becoming what many people call the Buffalo Bills of baseball, the Rangers have a decent .569 winning percentage at home. It’s not good enough to fill more than 63% of the seats, however. A dead-last ranking in stadium food doesn’t help either. But, this also makes it an excellent buy, and a stadium to see — even if only for the entertainment factor.

Seems like an obvious pick, unless you’re a Red Sox fan. There’s no ballpark that better represents its city than the new Yankee Stadium. It’s big, impressive, and pretty much loved by the national media. And, why not? The Yankees have an (almost) bottomless pocketbook. They can afford to build the best. Once you get there, you realize just how large this thing is.

While the Yankees have an impressive home winning percentage in their park (.610), some people don’t like that the stadium feels “cavernous” and overwhelming. Fact is, you can’t escape their success when you enter their stadium. It’s everywhere.

Home of the Toronto Blue Jays. Back in the early 1990s, there was this concept of a retractable roof. It was crazy then, but it was also the coolest stadium in baseball. Today, rappers have retractable roofs on their homes. And, they have the Blue Jays to thank for the inspiration. And, last year, the Jays have pulled themselves back to relevance. With a near-70% turnover on tickets, more of the seats should be filled this year.

Come get your LA Dodgers tickets. While you’re there, actually watch the game. You don’t lure a team with a storied past away from its home city with cookie cutter designs. Unless, of course, you’re Oklahoma. But the Dodgers moved lock, stock, and barrel away from Brooklyn for Chavez Ravine. It packs 83% of its seats. The Dodger Dog is iconic, and then there’s the Canter’s Deli. 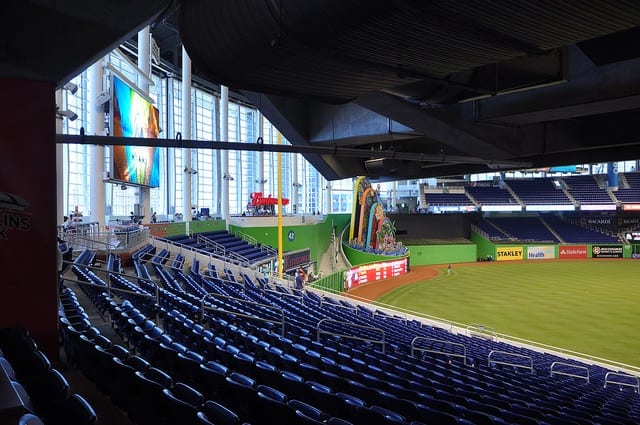 Home to the Miami Marlins. When the biggest-selling feature in your stadium is a bar with naked dancers, then maybe you need to work on your game. But, then again, maybe you don’t. It’s a half-billion-dollar, high-tech palace. It matters not that the Marlins haven’t had a winning season. They draw most of their 21,000 fans thanks to the swimming pool and body-painted Clevelander bar in left field. Still, it’s a great place to check out if you’ve never been here.

Tampa Bay Rays play here, but it’s not well-loved by many sports fans. Some people will tell you it’s not a great place to catch a baseball game, but the food here is really good. It also doesn’t hurt that the Rays have dominated home field until just the last few years.

Joseph Fletcher has always been hooked on sports, ever since he was a young kid. As he grew older a passion for travel also developed, and he’s been working to combine the two ever since.

Tips for Bringing Pets on Your Next RV Adventure

Seven reasons you should move to Florida

The Connection Between Your Shoes and Spine According to Dr. Glenn...